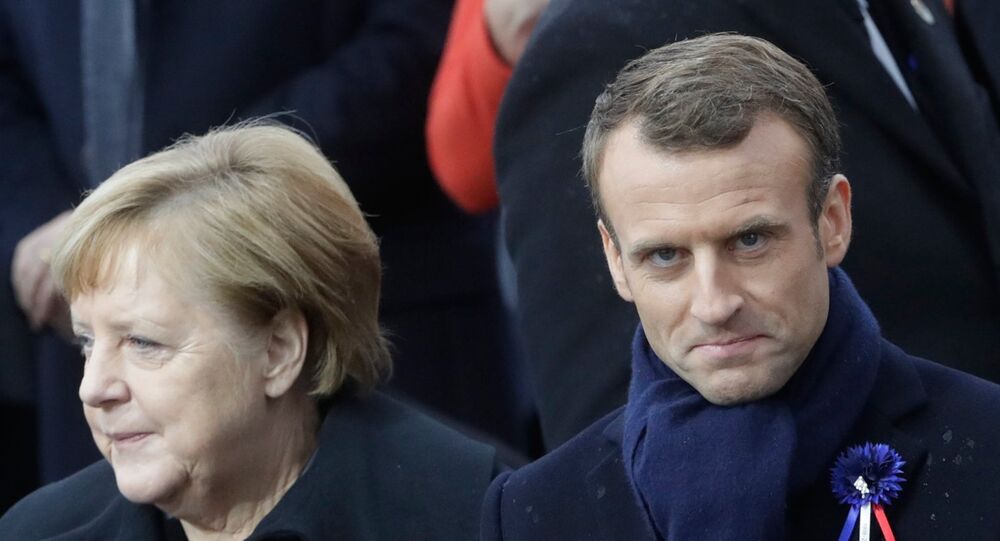 Just weeks before the UK's scheduled exit from the European Union, French President Emmanuel Macron has come up with an idea for a "European Renaissance".

Some European politicians have expressed their support for Macron's initiatives. In particular, President of the European Council Donald Tusk has called on EU political forces to stand against external financing of eurosceptic parties, while Belgian Prime Minister Charles Michel backed the idea of a "united Europe, which defends freedom and democracy".

Sputnik: This is not the first time Macron has pushed for a collective version of Brexit. What does he want to achieve by this?

Alex De Ruyter: For Macron, Brexit serves as a "wake up call" to the EU in terms of the need to connect with a bigger vision of the founding principles of the EU as a means to preserve peace in a continent with an obviously turbulent past.

For him the "European Project" is also a means to promote shared prosperity and enable a group of 28 small countries (in world terms) to better meet the challenges of migration, environmental degradation and regulating corporate excesses (for example, Macron has referred to combating the power of the tech giants; Google and Amazon etc.).

He also sees Brexit in terms of a populist (that is right-wing populist) challenge to peace and stability in Europe, as such movements espouse a return to xenophobic nationalism as a simple solution caused by the problems of modernity. Macron is astute enough to realise that globalisation has not delivered benefits to everyone in the EU and that more needs to be done to share prosperity (for example, his call for an EU-instituted minimum wage).

Sputnik: Macron also said that what the bloc needs is a Renaissance. In your view, is this the solution to the EU?

Alex De Ruyter: Yes. I do not think that the EU falling apart would entail any good for peace and prosperity in Europe. That said, its mechanisms are in need of reform. In essence, in my view, there are two issues: that of governance and accountability, and also what level of economic and political integration works best.

I think the issues around governance and accountability are largely one of perception. While it is true that EU citizens do not elect key officials such as Donald Tusk or Jean-Claude Juncker, the member countries do, via their leaders. European citizens also elect MEPs to the EU Parliament and this body does have a veto ability over key aspects of EU policy (for example, its assent is needed to approve the Brexit agreement).

Reform here could consist of further measures to enhance its powers, such as a greater ability to propose and enact legislation — of course, this would take us down the road towards EU-federalism. Related to this would be an increased need for engagement by national governments to pro-actively educate their citizens on what the EU does — and does not — do. This was all too evident in the lead-up to the 2016 referendum in the UK, where factual conversations on the nature and operations of the EU (and the UK's actual decision-making abilities within it) were sadly lacking.

This leads me to my second point, that further economic integration, I think, would also be necessary for the EU to prosper in the future. The fundamental problem here, of course, is to what extent the member countries are willing to pool further sovereignty at the EU level. Member states retain their own ability to set fiscal policy and vary tax rates, for example, and jealously guard this. In contrast, monetary policy is set at the EU-level for those who have the Euro. However, a common monetary policy without offsetting fiscal mechanisms, however, is a "blunt tool", meaning that areas that lag behind the "boom regions" of the EU suffer when the ECB raises interest rates. It is for this reason, I think, that further fiscal integration will be necessary.

© AP Photo / Ludovic Marin
Referendum? Macron ‘Ready to Cast Away His Europeanist Credo to Save Face’
Of course, this would require a buy-in from the biggest net contributor to the EU budget, namely Germany. To date, the German government has been reluctant to entertain this and Macron has struggled in his efforts to persuade them otherwise. Still, it is possible that the current context may lead to a re-think by the more fiscally conservative (Germany, Netherlands etc.) members of the EU.

Sputnik: Some countries in the EU have supported Britain's decision to leave the bloc, moreover, have expressed their will to follow their example. What does this say about the Union as a whole?

Alex De Ruyter: I am unaware of any such country in the EU supporting the UK's vote to leave. Much attention has been focused on Poland and Hungary, for example, as drifting into the right-wing populist domain (as the approach of Viktor Orban has demonstrated) or otherwise the presence of far-right parties in coalition governments (e.g., Sweden, Austria). However, to date, none of these countries has expressed any formal intent or desire to leave the EU. It was notable that after the Brexit vote in 2016, many right-wing pundits (Nigel Farage amongst them) were confident that Brexit would trigger a domino effect and that the Netherlands, France and Austria (each of which has vocal right-wing groups, those of Wilders and Le Pen, for example) would follow suit. This did not happen. Le Pen only achieved 35% of the vote in the final run-off for the French presidency.

Nevertheless, for Macron, the dangers of far-right parties seizing a significant vote in the upcoming EU Parliament elections in May (and the prospect of another run-off against Le Pen in the next French presidential elections) remain very real, and hence his call for a renewal of the European project and re-engagement with the citizenry. It is notable that Macron has stated that the UK would find a "natural home" in such a Europe (EU) — perhaps suggesting that he thinks that the UK might yet change its mind on Brexit, as talk of a possible "second referendum" attests.

I don't think this would have any impact on EU-UK relations. This proposal, I would suggest, is aimed at non-European "powers" (although this could mean countries or individuals). The Brexit context is notable to the extent that there is continued controversy in the UK over the extreme likelihood that particular Leave campaigns were funded by foreign interests and it is this, I believe, that Macron is trying to illustrate as a warning for the EU in tightening up funding rules going forward.