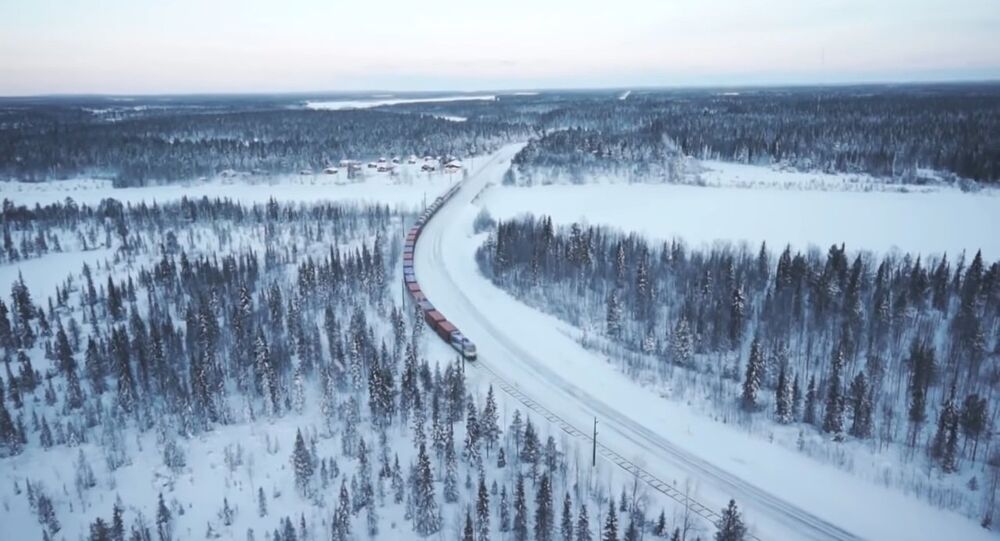 A row has broken out about whether a £2.5 billion railway linking a port on the Arctic Sea with the European Union is a good thing or an environmental disaster. Sputnik spoke to Timo Lohi, development manager with the Region of Northern Lapland, about the benefits of the railway.

The Finnish and Norwegian Transport Ministries have vowed to plough ahead with an Arctic railway linking the port of Kirkenes to Rovaniemi in southern Lapland, where it would link up with the existing railway network.

A special task force was set up in March last year and Finnish Minister of Transport Anne Berner said they hoped to have it built by 2030.

But Timo Lohi, development manager with the Region of Northern Lapland, said that timescale was a bit optimistic as it could take 15 or 20 years just to decide the route for the railway.

As ice off the northern coast of Russia melts, the Northern Sea Route has become an economically viable alternative to the "long way round".

Instead of sailing to Europe via the Red Sea and the Suez Canal, ships from China, Korea and Japan can sail around the northern tip of Europe, which is around one third shorter than other sea routes.

Mr. Lohi said eventually containers from China and Japan could be brought to Kirkenes and then transported by train through Finland and down into Germany, France and the rest of the EU.

He said the project was designed to link in with another ambitious project — a £17 billion tunnel linking Helsinki with the Estonian capital, Tallinn.

"The railway is a strategic project for the Finnish government. They want Finland to become a transport hub and believe it will increase jobs as well as increase tourism in Lapland by around 17 million euros (£14.6 million) a year," Mr. Lohi told Sputnik.

The indigenous Sami people say the railway will affect herds of wild reindeer and risks damaging the fragile eco-system in Lapland.

"Reindeer follow migration paths through forests. If they can't, there will not be enough food to feed them all….Without the reindeer, the Sami people wouldn't be," Jussa Seurujärvi, 22, told The Guardian.

"They are being quite emotional, possibly because there has not be enough information on the railway. There are already roads crossing the reindeer herding area. The railway will be fenced off and there will be four bridges for reindeer to cross it," Mr Lohi told Sputnik.

"They (the Sami) are perhaps afraid that if we have this railway there will be more mining," Mr Lohi told Sputnik.

The Kevitsa mine, near Sodankylä, opened in 2012 and the nearby Sakatti site is expected to contain even bigger deposits of ore.

Climate change is set to boost the economies of northern Russia, Norway, Finland and Sweden but critics say the downside will be immense environmental damage.

Mr Lohi said the Russian government was already increasing the size of Murmansk port to cope with the expected growth of the Northern Sea Route.

"One of the main reasons for it is global warming. It's much more environmentally friendly to travel by train and the Northern Sea Route is 30 percent shorter so there is less of a carbon footprint. Plus heavy fuel will be forbidden in the Arctic," Mr Lohi told Sputnik.

"If you can load containers onto trains at Kirkenes and then send them to eastern Europe by train you could save seven to 10 days," Mr Lohi told Sputnik.

One of the main bones of contention is the route the railway might take near Lake Inari, close to the Finnish/Norwegian border.

Mr Lohi said the Finns favoured a route to the east, which would avoid reindeer herds, but the Norwegians would prefer the western route because they wanted to protect the Pasvik national park on the eastern shore.

An estimated 30 percent of the world's untapped gas reserves and 13 percent of oil reserves are located in the Arctic region.

Mr Lohi said a recent feasibility study found the railway was not currently viable but he said he believed it would happen one day.