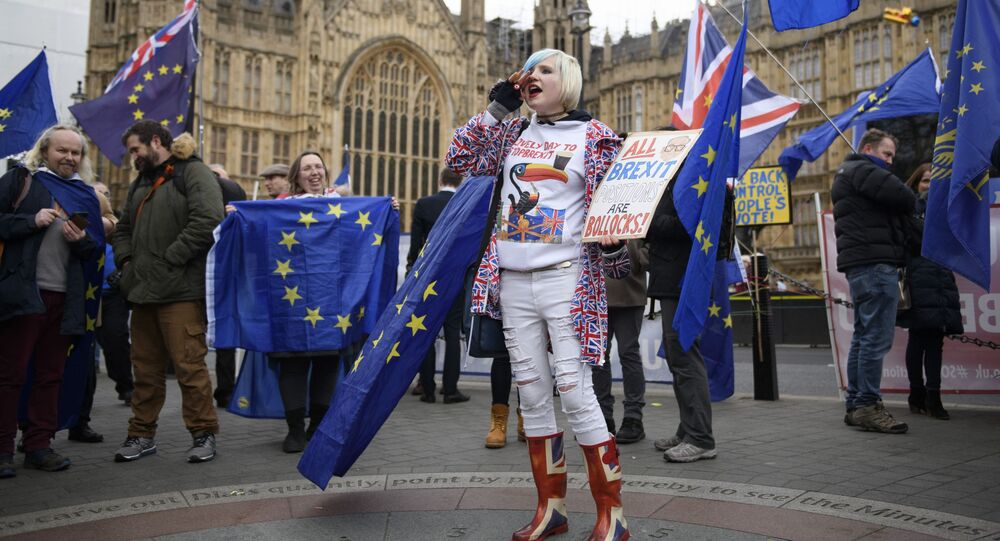 Reports are circulating that leading Conservative backbenchers are becoming skeptical of British Prime Minister Theresa May’s capability to finally hash out a Brexit deal with the EU before this month’s deadline. Sputnik has spoken with UKIP’s David Kurten on Britain's chances of leaving the EU in March as was initially planned.

Sputnik: Do you think that the UK will actually leave the EU this month and will extending Article 50 be a disaster?

David Kurten: We should be leaving the EU this month but it looks like the two biggest parties are doing everything that they can now to delay Brexit, and until last week that was a certainty; now the probability of that happening has gone down, with Jeremy Corbyn supporting a people’s vote, Theresa May saying she’s going to give a vote on Article 50 being extended.

This looks like a pincer movement which is going to give us both of those things, so it is a betrayal of the British people, of democracy, and of the vote in the referendum in 2016.

READ MORE: Brexit: 'At This Stage it Looks Like an Extension Might be on the Cards' — Prof

If they can’t sort out exiting properly in two years and nine months; extending it for another three months isn’t going to make any difference. The people who want to extend it want to do so for one reason; which is to overturn the referendum result, to keep us in the EU, or to deliver Brexit in name only, and then take us back in at some later date.

© AFP 2021 / MANDEL NGAN
Farage Rips May's Deal as 'Surrender', Says PM 'Not Made of Same Stuff' as Trump
Extending Article 50 also depends upon the consent of all member states of the EU as well, so they all have to agree on the length of the extension and the purpose of the extension, and they’re giving mixed messages.

It looks like there are all different strands playing a very clever game, different parts look disjointed but if you put them all together; it is a strategy to delay Brexit and to overturn Brexit.

Sputnik: Should the UK just depart on WTO rules instead of leaving under the terms of the prime minister’s deal, or extending Article 50?

David Kurten: The only way we’re actually going to get a good deal; which is what we do want, a mutually beneficial tariff free agreement in goods and services, which would be good for the UK and the EU, we’re not going to get that with Theresa May’s negotiating skills which are absolutely terrible.

We need to leave on WTO terms on the 29th of March, we will then take back control fully of all areas of our national life; then the EU I think will come back to the table and arrange with us, that mutually beneficial free trade agreement in goods and services.