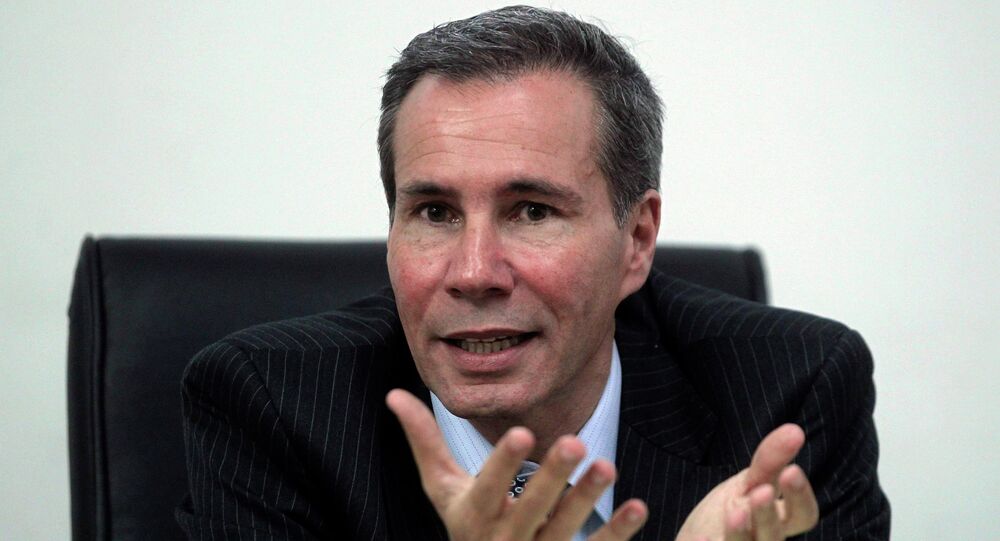 Former President Cristina Fernandez de Kirchner is being lined up by the main opposition coalition to be their candidate in October's presidential election in Argentina. Sputnik spoke to Argentinian journalist and author Pablo Duggan about why a bombing in 1994 remains a factor.

Kirchner, who is often known by her initials CFK, is primed to take on the US-backed conservative President Mauricio Macri, who has overseen a collapse in the economy.

But CFK remains unpopular with many Argentinians, partly because of her alleged role in the mysterious death of Alberto Nisman, a prosecutor who was investigating the 1994 bombing of a Jewish centre, the AMIA, in Buenos Aires, which killed 85 people and was widely blamed on Iran.

Nisman, who claimed CFK and her administration was trying to obstruct the investigation for fear of harming a trade deal with Iran, died in January 2015 from a gunshot wound to the head.

Netflix are reportedly making a mini-series about his death and the investigation into the bombing.

Pablo Duggan, an Argentinian journalist and the author of Quien Mato a Nisman? (Who Killed Nisman?), said the case was used by Macri in the 2015 presidential campaign, when he defeated Daniel Scioli, the candidate from Kirchner's party.

"The New York Times said in March 2015 that the assassination of prosecutor Nisman would change the result of the October election and many think they were right, except that the "assassination" was fake news, it never occurred," Duggan told Sputnik.

"Possibly CFK will try to prove the fake news of both the assassination of Nisman and his accusation regarding the agreement between Iran and Argentina, to show how Macri and (his party) Cambiemos have lied about her," Duggan told Sputnik.

CFK first became President in 2007, replacing her husband Nestor, who died in 2010.

"That is part of the great division between both parties. Both of them sustained their position on nothing more than belief. My book tries to break that status quo, in order to set the record correctly on what really happened, not on what one of the parties wants to hear. Of course one of the sides was right," Duggan told Sputnik.

He said the research he did for his book led him to believe Nisman did commit suicide.

'No Evidence of Murder'

"Studying the judicial file I discovered that all the evidence showed clearly that it was a suicide. The autopsy, the blood stains analysis, and all others were very clear, there was absolutely no evidence of a murder," Duggan told Sputnik.

"The only piece on the file indicating a homicide was the legal expertise of the Gendarmería Nacional. This national security force has very little experience in such cases and it was clearly a political scheme to prove an unexisting homicide. In my book I present much proof of the falseness of this expertise. It is a huge scandal that a security force presents false expertise on a criminal case," Duggan told Sputnik.

On 18 July 1994 a Renault van packed with 275 kilograms of explosives was driven into the front of the Asociación Mutual Israelita Argentina (Argentine Israelite Mutual Association) building in the centre of Buenos Aires, killing 85 people including the van's driver, who has never been conclusively identified.

Eight days after the bombing, a car bomb went off outside the Israeli embassy in London, injuring 14 people.

Both incidents were blamed on Iran and their Lebanese allies, Hizbollah.Israel and the FBI both claim the van driver was Ibrahim Hussein Berro, 21, a Hizbollah operative from Beirut but Berro's brothers say he died in combat in Lebanon in September 1994.

Was Iran Wrongly Blamed for the Bombing?

Duggan said his research undermined the widely held belief that Iran was responsible for the bombing.

"The AMIA bombing shows a weak government (under President Carlos Menem) trying desperately not to be blamed, not to be accused of not being able to prevent such attack. That's why they were eager to buy the Israeli (and American) idea that it was Iran who ordered the attack. There is no consistent prove of that in all the AMIA files," Duggan told Sputnik.

"Among those who worked to maintain the Iran accusation was Alberto Nisman, clearly working to sustain a false accusation rather than search for the truth. Obviously backed up by Israel and American lobbies. In Wikileaks there is substantial proof of that," Duggan told Sputnik.

Duggan said the AMIA cover-up also helped Menem to smear his political opponents at the time of the bombing.

"Nobody really cared about the truth, except a group of relatives of the victims. Many used the 85 victims in a geopolitical war, others for domestic purposes, and many others (including Nisman) to fill up his bank accounts with dollars. Don't forget that Nisman had a secret bank account with Merrill Lynch with more US$600,000 in it when he died, among many other properties whose origin is unknown," Duggan told Sputnik.

Nisman's personal life was also very murky — he had reportedly used high class prostitutes and had rowed with his ex-wife, Judge Sandra Arroyo Salgado, who accused him of being a bad father in the run up to his death.

"Thirty six hours before his death, Nisman chatted on Whatsapp with Sandra. On that chat they had a fierce discussion. She said a lot of things to him — the complete chat is in my book. Nisman says "estoy hecho mierda" which means "I am destroyed." She says a lot of ugly things to him, that he was a ego maniac, that he used the girls, that he abandoned one of their daughters in Madrid (a story that I tell in the book)," Duggan told Sputnik.

© AP Photo / Natacha Pisarenko
Sandra Arroyo Salgado, ex-wife of the late Argentina prosecutor Alberto Nisman, talks during a press conference in Buenos Aires, Argentina, Thursday, March 5, 2015. Salgado said that experts hired by the family of Argentine prosecutor concluded that he was killed and ruled out the hypothesis of suicide.

"The bombing revealed all our problems as a nation. The government tried desperately to defend itself. Other countries tried to use AMIA to their own benefit. The AMIA and DAIA (Delegación de Asociaciones Israelitas Argentinas, the main Argentinian Jewish community association) also played a shameful part on the investigation, backing up the Iranian theory just to gain advantage of economics relations with Israel and the US lobbies. Nobody cared about the truth," Duggan told Sputnik.

Argentina has the sixth largest Jewish community in the world — around 230,000 people — dating back to the 16th century.

"The Nisman death continued that modus operandi. Nobody cared about what really happened. Macri's Cambiemos party, the anti-Kirchner media, DAIA and AMIA, all of them used the supposed homicide to attack Cristina Kirchner just for political purposes. The legal file is stuck on a ridiculous theory that has no proof other than a false and absurd expertise," Duggan told Sputnik.

Last week former President Menem, now 88, was cleared of all charges but a judge, Juan José Galeano, was jailed for six years for his role in bungling the investigation.