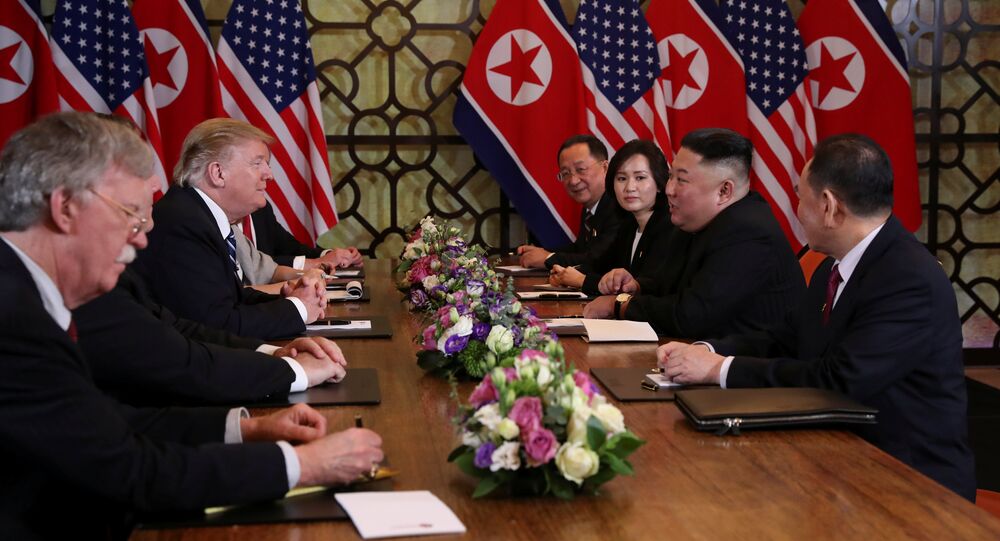 American President Donald Trump has confirmed that no further progress towards denuclearisation has been made during a two day summit in the Vietnamese capital Hanoi with his North Korean counterpart Kim Jong Un. But could tensions between the two nations escalate once more?

Sputnik spoke with Tom Harper, Doctoral Researcher at the University of Surrey for more…

Sputnik: Would you consider this summit to be a failure?

Tom Harper: I think they've gone to great pains to show that their relationship has improved quite a lot, but the biggest problem that they've had is trying to do too much in too short a period of time.

That's really the biggest dilemma, and it will take more than just one discussion to solve that.

Sputnik: Could we see a re-escalation of tensions between the US and North Korea?

© REUTERS / Leah Millis
Summit With No Result: Kim Jong-un Doesn't Want to Match 'Trump's Dance Steps' - Analyst
Tom Harper: I think the way to go would be to have more summits because; again, this is not an issue that can be solved in one meeting and also this is what Trump wants to be part of his legacy, to finally end the Korean tensions.

Quite a few Presidents have also done this. We saw George W Bush doing this towards the end of his tenure and Obama did that as well, but Trump has done this quite early on, so in some ways, I believe that he feels that he wants this to be part of his legacy.

At the same time; institutional factors might work against him because some of his wider institutions don't necessarily share his idea about that. Allies in the region might be a little concerned about it; particularly Japan, where they were worried that their concern has largely been excluded, which marks a break from the US's policy towards Asia.

On the North Korean side they have an interest in keeping their nuclear weapons because it's a deterrent; just look at the cases of regime change such as Saddam, later Gaddafi who also gave up their nuclear programmes, and that is probably why North Korea still wants to have it.

That's what guarantees it a seat at the table for dialogue, which is what few other nations have; so I think it's not just a deterrent, it's a form of prestige, so they can say that you're going to have to deal with us with dialogue because we can inflict greater costs, so that is the dilemma.