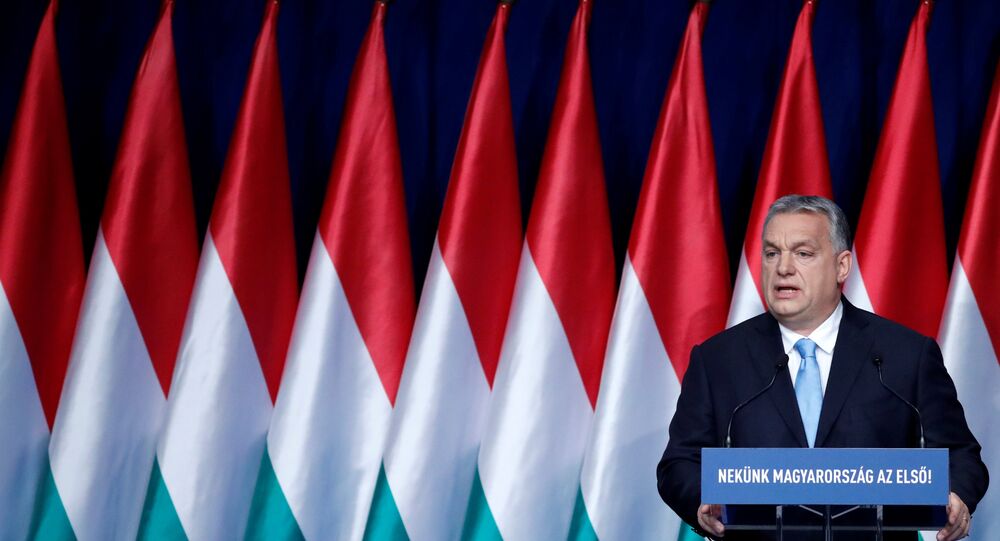 During the 20 March gathering, Hungarian Prime Minister Orban and his ruling Fidesz Party could face “renewed calls” for their expulsion from the European People’s Party (EPP), according to The Guardian. Sputnik discussed this with Mariann Őry, journalist and political analyst, Head of Foreign Desk at Magyar Hírlap, a Hungarian daily newspaper.

Sputnik: How high are the chances that Viktor Orbán could be expelled from the European People’s party?

Mariann Őry: It's unlikely, because those who really want to expel Fidesz from the EPP — the liberal Scandinavian and BENELUX member parties — are by far not the majority. They are of course the loudest, but there are many silent parties. Jean-Claude Juncker is strongly supported by Angela Merkel, so it's not surprising that her CDU party is angry about the Hungarian government's information campaign. But the CDU — a dominant force of the EPP — hasn't performed well in the last German elections (national and state elections). Viktor Orban has a big influence on Western European politics, he is popular among the voters who are putting pressure on their leaders, especially regarding migration policy, and the so-called "right-wing populist" parties (FPÖ, Lega etc) are getting stronger, while "traditional people's parties" are losing momentum.

READ MORE: Hungary PM May Face More Calls for Expulsion From EPP Amid His Row With Juncker

© REUTERS / Yves Herman
Merkel Voices 'Full Solidarity' With Juncker Amid Growing Rift With Orban's Party
Sputnik: What would be the consequences of that for Hungary and for Orban personally?

Mariann Őry: I really don't think that Viktor Orban should be too worried about being expelled from the EPP, but even if it happens, he would have strong allies in Europe, happy to co-operate with him.

Sputnik: What could be the consequences of that for the outcome of the European parliament elections in May?

Mariann Őry: It's highly unlikely that the EPP would make any final decision regarding Fidesz before the elections in May. The liberal Scandinavian member parties don't represent the majority of the parties, not to mention the European right-wing conservative voters. In many cases, it's the NGOs, the Greens, the liberals who are demanding the EPP to expel Fidesz, Soros-funded NGOs have been making campaign to bully the EPP — why would the leadership of the EPP listen to forces who actually want them to lose the elections? I don't think any leader of the EPP would seriously think that expelling Orban from the EPP would bring them better results at the elections  — on the contrary. As for the possible consequences of this unlikely scenario in Hungary: Fidesz voters wouldn't really care about the EPP's decision because Orban's anti-migration and pro-sovereignty policy is widely supported in Hungary.

© CC0
PM Orban on Migration as Way to Tackle Low Fertility: 'Fewer Children Born in Europe, We Want Hungarian Babies'
Sputnik: How deep are the divisions within the bloc and what are the main reasons for disagreement?

Mariann Őry: The EPP is a very big party family with many, different parties. I think that they have the same divisions we see in the EU in general. In the EPP's case, the East-West ideological division is very visible. The BENELUX and Scandinavian parties wouldn't even count as right-wing by CEE standards I think. The way of thinking of Western-Northern members parties and those of our region are very different. Fidesz has good connections to most EPP member parties of our region.

Sputnik: How well is the European People’s party expected to perform at the upcoming elections?

Mariann Őry: According to all the polls the EPP will still be the strongest group in the European parliament, but they will lose many seats. It will be very important how the CDU performs. Viktor Orban said several times that he doesn't want to leave the EPP, but instead, he hopes to guide back the party family to it's conservative, Christian democratic roots. We will see how the status quo will change in the EPP after the elections in May.