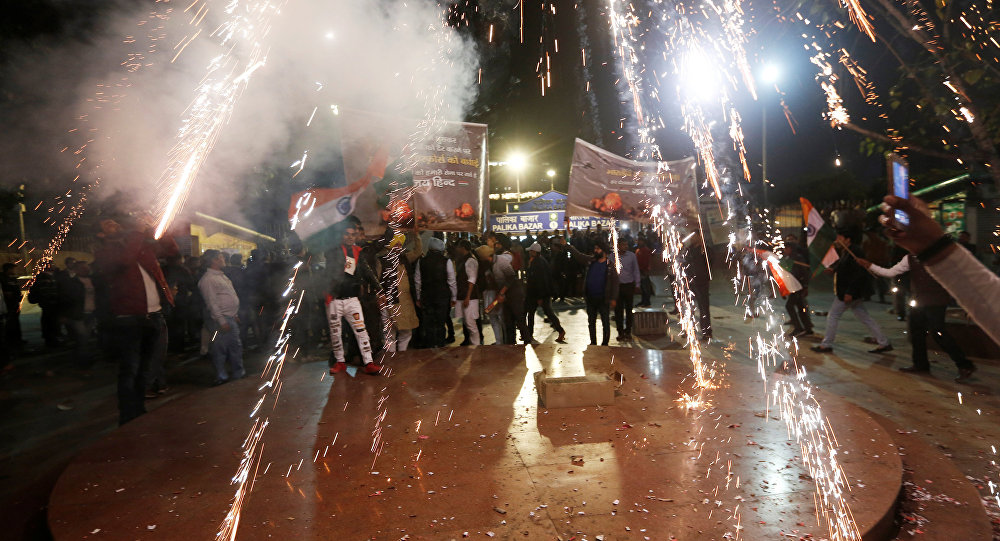 Tensions between the two nuclear powers escalated on Wednesday as both countries said they had shot down each other's fighter jets over the disputed Kashmir region. Pakistan said it shot down two Indian jets and captured a pilot, while India said it lost one plane and shot down a Pakistani jet.

Pakistan's airstrike was a demonstration of Pakistan's "desire and readiness for self-defense", the country's foreign ministry said in a statement.

This comes a day after India launched a strike against militants in Pakistan. New Delhi says those raids were in retaliation for the 14 February militant attack in the Indian-administered part of Kashmir, which had left over 40 Indian soldiers dead.

Sputnik discussed the growing tensions between India and Pakistan with Nitin Gokhale, a journalist, author and national security analyst.

Sputnik: What is your assessment of the current conflict between India and Pakistan? How dangerous is this escalation?

Nitin Gokhale: The tension is high at the moment, and, certainly, there is concern everywhere that it will get out of hand or it will climb the escalation ladder. But in the last 24 hours or the last 12 hours, I would say that there have been some developments which point towards a possibility of de-escalation after India issued a statement that said that it kept a window of opportunity for any kind of compromise or any kind of de-escalation.

© REUTERS / Mukesh Gupta
Pakistan and India Exchange Fire in Kashmir - Indian Defence Ministry
This afternoon, Pakistani Prime Minister Imran Khan issued a statement saying that a war isn't in anybody's interest and let's talk and let's try and do any kind of reconciliation that's possible. And despite the fact that today the two air forces almost had a dogfight over Indian airspace in the morning. Both sides have lost at least one aircraft, and one of the Indian pilots is in Pakistan's custody as we speak. Therefore, I see that in this chaos there is an opportunity for lowering the tension in the coming 48 to 72 hours.

Sputnik: India's Foreign Ministry says the airstrike was absolutely necessary due to what it said was Pakistan's inability to destroy terrorist infrastructure. What is your take on this? Was this violation of Pakistani airspace justified?

Nitin Gokhale: It was justified because for years, especially after the Punjab attack, India had asked Pakistan for big action against Jaish-e-Mohammad leader and these soldiers, the terrorists southward. And yet, Pakistan didn't take any visible action or show any intent to do anything against them. And then India had definite information intelligence from both its human intelligence sources and technical intelligence that the same outfit was trying more suicide attacks in the coming weeks and days.

Sputnik: New Delhi has repeatedly accused Islamabad of harbouring terrorists, while Pakistan denies the charges. However, Pakistan has recently confirmed that it is ready to cooperate with New Delhi on the Kashmir attack. In view of this, how likely is the situation to get worse?

© AP Photo /
DoD Urges India, Pakistan to Cease Military Actions After Kashmir Air Skirmishes
Nitin Gokhale: I don't think the situation will get worse. As I've mentioned, it has got to the lowest possible stage, and therefore it is in Pakistan's interest to cooperate with India. The world has started to recognise that Pakistan is the harbourer of terrorist outfits, and a supporter and an equipper of terrorist outrage. Therefore Pakistan must take action because if you see the reaction of global powers, nobody has condemned India's actions, nobody has come out in support of Pakistan.

In fact, in the trilateral statement today by India, China, and Russia in China, they talked about uprooting terrorism, and every country must try and uproot terrorism from their soil. Similarly, the US allows the big action; France has supported India, and so has Australia. Pakistan is feeling the pressure to act against terrorist outfits and their proxies. I think they will become very able to do so in the coming weeks and months.