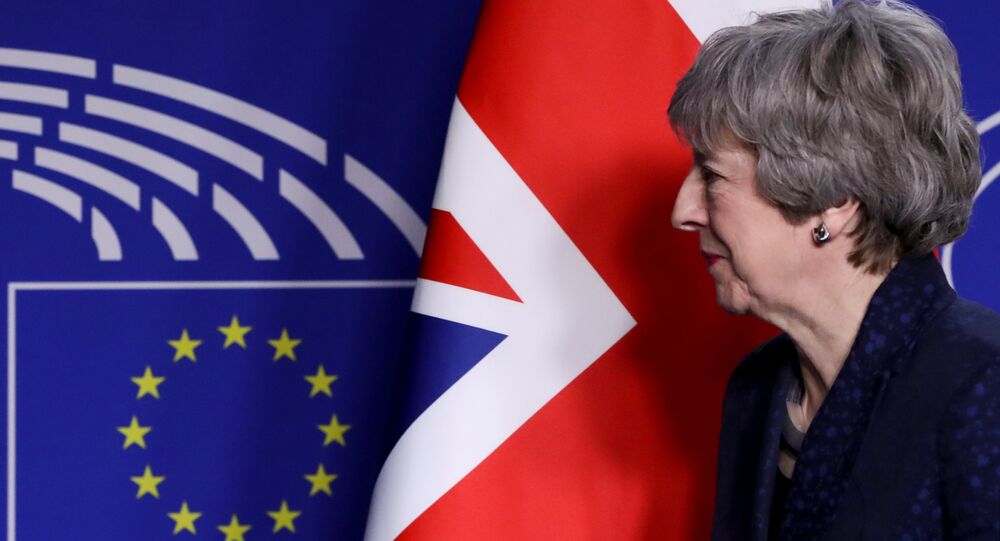 British Prime Minister Theresa May has further outlined her desire to push her Brexit deal through parliament by giving MPs the chance to delay the UK’s departure from the EU or officially take a no deal scenario off the table. But it this just yet another farcical decision from the country’s leader?

Sputnik spoke with journalist Marcus Stead for more insight on the issue.

Sputnik: Will Article Fifty be extended if no deal is agreed?

Marcus Stead: What a complete and utter mess we are in. The seed of this was sewn when the Conservative Party made Theresa May Prime Minister, not through a proper leadership contest; but via a coronation in effect.

She was a remain supporter at the referendum, her heart has never been in it, and her nickname when she was home secretary was “Theresa Maybe”, because she was seen as dithering and indecisive, and she’s had a habit of kicking tough decisions into the long grass, and those traits have continued as Prime Minister.

© Sputnik / Justin Griffiths-Williams
'Not Impossible That a Revised Deal Could Get Through' – Analyst on Brexit Talks
It’s likely that the real drama will take place between the 12th and 14th of March, and based on Theresa May’s statement on Tuesday; three things will happen.

It seems likely that the House of Commons will reject no deal; however no deal would still be the default legal position, unless something else then happens. For that reason; if no deal is rejected, Theresa May will propose a short extension to Article Fifty on March the 14th.

Any extension of Article Fifty would require the consent of all twenty seven member states, and that is by no means guaranteed, and there are certain questions that they would be asking, how long would the extension be for?

There are elections for the European Parliament between the 23rd and 26th of May, and if there is even the slightest prospect of the UK still be a member of the EU by that stage; the UK would surely have to play a part in those elections.

© AFP 2021 / Tolga AKMEN
UK to Survive No-Deal Brexit, But Disruptions for Economy Inevitable - Trade Minister
If that happens; it seems likely that Nigel Farage’s new pro-Brexit party would do very well indeed; the proportional representation electoral system works in his favour, and a very large number of voters in the UK would use that as an opportunity to give the entire political establishment a good kicking.

What would the purpose of extending Article Fifty be? What could they hope to achieve in that short period? Is there a realistic prospect of a deal in that time? What could be agreed by then that couldn’t be agreed beforehand? Or is the main purpose of an extension to more adequately prepare for a no deal?

Sputnik: Would reverting to WTO rules be as bad as people claim?

Marcus Stead: There are many risks attached to no deal, and I’ve never been blasé about this. All the various agencies; whether it’s to do with medicine or technology, would have to be replicated in the UK, because they are currently EU agencies, UK versions would have to be created.

My understanding is that the civil service only even began preparing for that as recently as last December. There’s a little bit of breathing space between now and the 12th of March, and as former Prime Minister Harold Wilson famously said; “Twenty four hours is a long time in politics”, and indeed it is.

© REUTERS / Vincent Kessler
Farage Threatens to Boycott Brexit 'Final Say' After Labour Backs Fresh Poll
On that basis two weeks is a very long time indeed. It’s not impossible that Theresa May could reach a new agreement with the EU that is satisfactory, both to her own back benchers and to the wider party and country, on or before that March the 12th deadline.

That would mean finding a solution to the Northern Ireland backstop issue; particularly the aspect that currently states that it would not be time limited and would require the consent of the EU to end it. There are also other aspects of her original EU withdrawal agreement that give concern to the backbenchers, the backstop is far from the only issue.

As enormous as that defeat in the House of Commons was; it’s not impossible that with significant concessions, a revised deal could get through, if the Brexiteers on her own backbenches sense that enough progress has been made, and they may prefer an imperfect deal to the prospect of Article Fifty being extended, and yet more uncertainty.

Alternatively; there’s a second way of looking at this which has been overlooked somewhat. By Tuesday evening I was hearing that hard-line Conservative Brexiteers were actually feeling somewhat upbeat and there’s a reason for this.

© REUTERS / Russell Cheyne
Scottish National Party Tables Brexit Amendment Ruling Out No-Deal Scenario
They know deep down that a no deal Brexit could have been very destructive to the UK, not least because of the lack of contingency planning, but also to their own reputations as politicians. For that reason; they can vote down Theresa May’s plan, because within forty eight hours of that vote, it will be announced that there will be a three month extension to the UK’s departure from the EU, which gives time for the Prime Minister to negotiate the kind of Brexit they want, or to prepare properly for no deal.

That does of course depend on whether the twenty seven EU member states would back an extension, and I’m not as convinced as some analysts are, that that will happen, so I do it with caution. In real terms; the possibility of a no deal Brexit, all be it a deferred one has not diminished as a result of the events of the last few days.