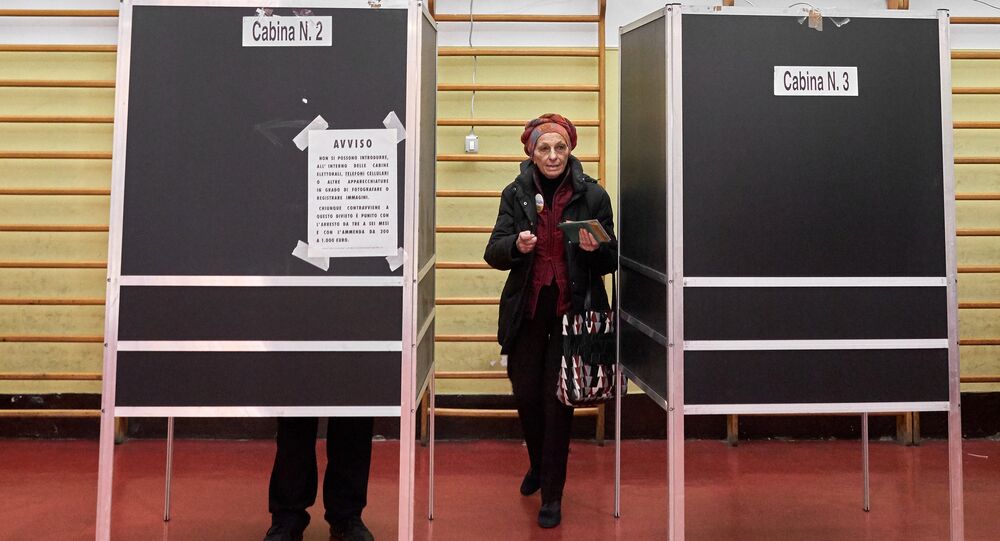 GENOA (Sputnik) - The victory of a right-wing candidate in the regional election in Italy’s Sardinia proves the unfolding national trend where rightist forces, including Italian Interior Minister Matteo Salvini's Lega party, are on the rise while the anti-establishment Five Star Movement (M5S) is losing support, experts told Sputnik.

On Sunday, the residents of Italy's autonomous southern region of Sardinia elected the region's president along with the members of the regional council. The voter turnout was 53.75 percent.

According to preliminary results, centre-right candidate Christian Solinas from the Sardinian Action Party, backed by Salvini, won the election, getting over 47 percent of the vote. Center-left Massimo Zedda, who got only around 33 percent, has already conceded. M5S candidate Francesco Desogus came third with around 11 percent of the vote.

Roberto D'Alimonte, an expert on electoral systems and Italian political affairs from the LUISS university in Rome, recalled in his comments to Sputnik that regional elections had always been M5S's so-called weak spot, saying that the movement's results in Sardinia were not surprising.

"M5S has always done very poorly in local elections, in regional elections. So it is not a complete surprise that they are doing so poorly [in Sardinia]. They do not have roots. But certainly, the result is particularly bad. If this is the final result, clearly, it is not a good result," D’Alimonte stated.

© AP Photo / Luca Bruno
Right-Wing Lega Party Surges in Northern Italy's Regional Elections
Signs of M5S' demise come just two weeks after a similar performance in the Abruzzo region, where Marco Marsilio, the candidate from the center-right coalition, won the regional election with 48 percent of the vote, and Lega got the majority of seats in the Regional Council.

Meanwhile, the M5S candidate received only 20 percent of the vote. Back in March 2018, M5S received some 40 percent in both Abruzzo and Sardinia.

According to Lorenzo Codogno, a visiting professor at the London School of Economics, the Sardinia vote's results indicate the M5S's "sizable collapse."

"The tendency recorded in many areas of the country — Abruzzo, recently, and others — and in opinion polls show the center-right coalition continuing to score well, led by the Lega… while the M5S is being in free fall," Codogno told Sputnik.

According to D’Alimonte, the rightists were also following an earlier trend, but an opposite one, consistently attracting new supporters.

"We have seen it in the general election in March last year and also in regional elections. This is the confirmation of the trend [of the right-wing rise]… I think the Lega will do well in the European elections," he added.

© Sputnik / Alexey Vitvitsky
'First Time, European Election Will Be Fought on European Issues' - Scholar
According to the projections published by the EU Parliament earlier in February, Lega is expected to expand its presence in the next legislature from the six seats it currently holds to a total of 27.

If this happens, Lega is set to become second-biggest party in the European Parliament, having just two seats fewer than the German centre-right alliance of the Christian Democratic Union of Germany (CDU) and Christian Social Union in Bavaria (CSU).

The reason for the continuing rise of the right-wingers lies in the issues they focus on in the public debate, D’Alimonte believes.

The local elections in Italy are being closely watched by analysts, some of whom consider them to be a test for the two ruling parties, Lega and M5S, ahead of the elections to the European Parliament in May.

After the results of the elections in Sardinia became known, the deputy prime minister and leader of M5S, Luigi Di Maio, said that nothing had changed for the government and the ruling coalition. Salvini, for his part, also noted that the results of Sardinia's vote changed nothing at the national level. Di Maio, however, said the party needed a shake-up and promised reorganization.

The views and opinions expressed in this article are those of experts and do not necessarily reflect those of Sputnik.