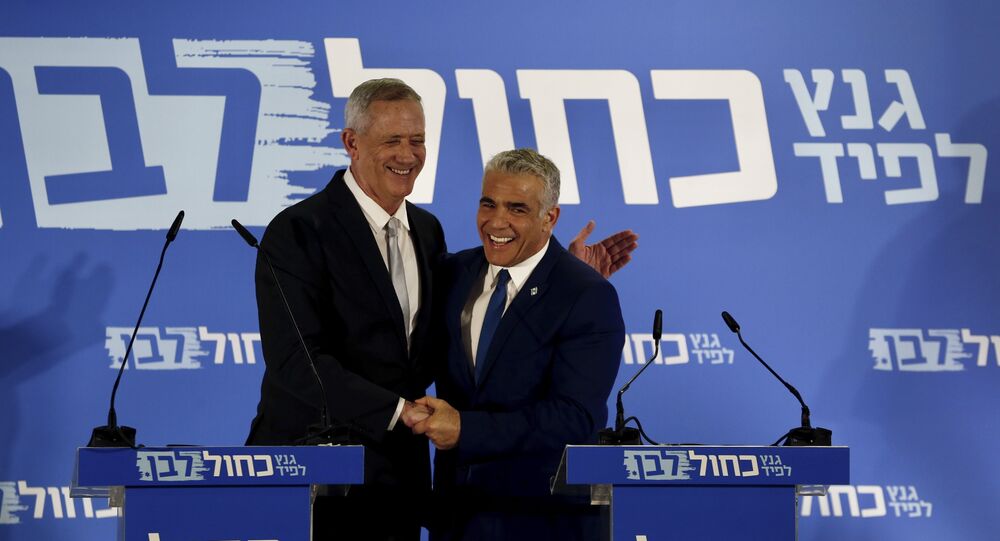 Last Thursday, marking the deadline for submitting the party lists, Gantz and Lapid, who lead the Israel Resilience and Yesh Atid centrist parties, announced that they had agreed to merge their party lists in the April elections in a bid to defeat the ruling Likud party led by Netanyahu. The two politicians also said that they would rotate as prime minister if they win — Gantz would head the government for the first two years and a half, with Lapid taking over the office afterwards.

Netanyahu, in turn, convinced right-wing The Jewish Home and Otzma Yehudit parties to merge ahead of the legislative elections in order to raise their chances of entering the Knesset for forming a coalition with his Likud party.

Nevertheless, the polls that emerged after the announcement showed that Netanyahu's Likud party now lags behind its main competitors for the first time since the election campaign started. The Gantz-Lapid alliance named the Blue-White bloc is projected to get 36 seats in the 120-strong Knesset, while Likud is forecast to get between 26 and 30 total seats.

New polls put #Gantz-#Lapid ahead of #Netanyahu. Three surveys show Blue and White surging ahead in April 9 election, with 35-36 seats to Likud’s 26-32. pic.twitter.com/7H0W2Uo5er

Moran Stern, an adjunct lecturer at the Program for Jewish Civilization in Georgetown University's Edmund A. Walsh School of Foreign Service, told Sputnik that the emergence of the anti-Netanyahu alliance offered a good alternative to the right-wing bloc being built by Netanyahu.

"The Gantz-Lapid alliance, officially called now the Blue-White party, is certainly an important development for voters who seek to challenge Netanyahu’s Likud and the right-wing bloc he has been assembling in recent days," Stern said.

Whereas alliances rarely succeed in Israel, the Blue-White bloc would have good chances for winning the vote if obtained support from the moderate right, Gideon Rahat, professor of Political Science at the Hebrew University of Jerusalem and senior fellow at the Israel Democracy Institute, said in his comments to Sputnik.

"I think that basically, alliances in Israeli politics are not successful, because it is easier to get more seats by yourself and when you give voters more things to choose from … [But] if they would be able to get votes from soft-right, from moderate right, they can do it [win in the elections]," Rahat said.

According to Stern, the decision of Gabriel Ashkenazi, who served as the IDF Chief of General Staff in 2007-2011, to join the newly formed alliance could become the very factor helping the Blue-White bloc to win votes of "soft right-wingers."

"Ashkenazi is popular among many right-wingers who feel that Likud under Netanyahu has completely departed from its national-liberal foundations and consider Ashkenazi a refreshing, ethically clean, responsible, and patriotic figure," he said.

The expert underlined, however, that the victory in the elections still did not secure their lead in forming a government.

"Even if Blue-White party wins the popular vote its path to the government is far from certain. A cardinal challenge is not only to win elections by a simple majority, but to form a political bloc, along with other parties, in order to secure a coalition of at least 61 seats out of the 120-seat Israeli parliament, the Knesset," Stern explained.

Dr. Israel Sergio Waismel-Manor, the chair of the Division of Governance and Political Theory at the University of Haifa, told Sputnik that if the Blue-White coalitions gained 36 seats as projected by the recent polls and managed to secure the support of the Labor and Meretz parties, they would be short of seats necessary to form a government.

"They would need to convince either Orthodox parties or rely on the support of Arab parties. Until now, no government in Israel has formed a coalition with Arab parties. That is what causes a real challenge to these leaders to actually form a coalition," Waismel-Manor noted.

At the same time, Netanyahu has got better chances of securing his position as prime minister, the expert pointed.

"Even in scenario in which this new party, the Blue-White party, gets 35 seats and Likud gets 30 seats, all major parties — from the Orthodox parties to Kulanu in the centre, to the right-wing parties — would say that they recommend Netanyahu, the president will have no chance but to recommend [him for the position of prime minister]," Waismel-Manor explained.

A similar situation took place in 2009 when Netanyahu’s Likud lost the elections to the centrist Kadima (Forward) Party then led by Tzipi Livni. Livni failed in finding common grounds with the Orthodox parties, with Netanyahu ending up forming and leading the government.

Stern, however, warned against jumping to conclusions with more than a month left until the elections.

"With the rapid pace of developments in Israeli politics these days, much can and will happen until voters actually cast their votes on April 9," he explained.

It is not the first time in the Israeli politics when leaders of two parties agree on rotating as prime minister. After the elections in 1985, Shimon Peres, whose Labour Party won the vote, failed to form a negotiate a coalition with smaller parties and agreed on a national unity government with Likud, with Peres and then Likud’s leader Yitzhak Shamir serving as prime minister in turns.

In 2015, Livni, who then led HaTnuah (The Movement) party, agreed with Labor Party’s Isaac Herzog about running together in the elections as the Zionist Camp and rotating as prime minister, but later scrapped the rotation deal.

However, if the Blue-White alliance wins the elections ensuring the majority of seats in the Knesset, it may become the first time when party leaders implement their pre-election agreement on rotating as prime minister after the vote, Stern pointed out.

"The Gantz-Lapid agreement is certainly new, as far as I can recall, in the sense that no previous party leaders have agreed on the rotation before the elections and have actually kept their agreement into elections day," he said.

Though there is a wide range of possible scenarios for the future, Gantz and Lapid are more likely to stick to the rotation deal, according to Rahat.

​Stern noted that it was still unclear how Gantz and Lapid were likely to act when rotating as prime minister.

"If the agreement survives, however, and the Blue-White party, wins elections and its leaders adhere to their rotation agreement nearly any scenario is possible: from internal ego battles, paralysis and early elections to good and productive working relationships," the expert said.

"They have some things in common. It is not only against Netanyahu, but it is also against his policy of being against the court, against mass media … kind of anti-populist alliance. Secondly, I think, they see eye to eye in terms of other policies, or if they don’t have really strong ideologies, they are quite pragmatic. That’s what the centrism is all about," Rahat said.

In December, Netanyahu called snap elections for April 9 amid corruption allegations against him. Initially, the parliamentary elections were slated for November 2019.