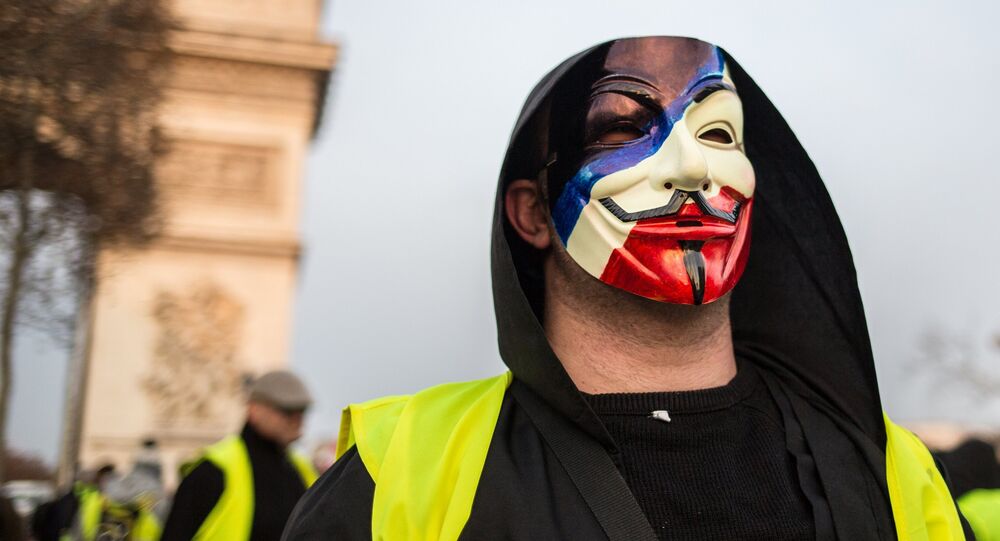 The French economy is facing challenges that can't be solved overnight, Fabien Chalandon, a French private investor, banker, and writer, has told Sputnik. He opined that President Macron should be supported in his attempt to tackle the country's problems, adding that the president's ouster wouldn't remove the problem.

Neither €10 billion worth of short-term concessions for the yellow vests, nor Emmanuel Macron's resignation would solve France's deep-seated economic problems, says Fabien Chalandon, a French private investor, banker, and writer.

"France has been badly managed over the past 40 years by an inept political class, 'the 1968 generation', which thought itself above the law of economics and common sense, and resorted to massive official and hidden public debt to finance ruinous social programmes as well as ill-conceived and badly managed industrial projects, to the accumulated level of several thousands of billions of euros, devised without scanning them through an opportunity cost analysis, and implemented despite their lack of long term economic benefits to the country", the French private investor told Sputnik.

Chalandon underscored that "this debt-addicted generation, which lived well by mortgaging their children's and grandchildren's future, and which crossed all partisan lines, thus putting Conservatives and Leftists of all kind and flavour on the same level of responsibility, has run France into the wall of debt, creeping ratcheted up high direct and more importantly indirect taxes and astronomical social security contributions, with bloated state and municipal bureaucracies holding civil society to tax ransom to keep their privileges".

He noted that "the lower half of French middle class has seen its disposal income being creepingly reduced, not only by excessive taxing, but simultaneously by destruction of jobs and income following the implementation by the same generation of politicians of ill-conceived globalist policies and the related brutal opening of economic borders to China".

© Sputnik / Julien Mattia
Macron Doing 'Increasingly Boring' One Man Show, Desperately Trying to 'Take Steam Out' of Yellow Vests – Politician
It is therefore not suprising that this two-folded blow has fuelled the yellow vests movement, which Chalandon caracterises as a "large-scale upheaval, unprecedented since 1968". Because of the deep-rooted origins of this crisis the finance expert emphasised that "this situation cannot be sorted out overnight".

"The political situation can only get worse before it improves, as the adjustment of public spending needed to stem the flow of increasing public debt, at least a reduction of 10 percent if not 15 percent of gross national product (GNP) from the current level of 55 percent, will squeeze income for everyone", he stressed.

Chalandon recalled that he described the looming economic crisis in his four op-eds for Le Figaro in 1995, 1996, and 1998: "Comparing it to 'the last Communist country in the world', and criticising its policy of ever-increasing public expenses financed by spiralling debt, at the expense of growth and employment, I predicted that it would be hit by the same painful adjustments Russia had to go through at that time, when it exited the Communist economic framework…" he said.

In August 1998 Russia's post-Soviet economy found itself in a deep crisis with crushing income, and public as well as external debt, that resulted in the Russian Central Bank devaluing the rouble and defaulting on its debt.

According to the finance expert, "France is just about to enter into this excruciating phase, the gilets jaunes crisis being both the result of 35 years of failed policies, and a harbinger of what is coming to sort it out… Because France runs a public, social and external deficit, which cannot last for long, and cannot devalue while being in the euro zone, it has to adjust income downwards".

President Macron is True Patriot Committed to His Country

President Macron has come under heavy criticism from both sides of the French political spectrum, while his approval ratings have been in free fall since November 2018, when the yellow vests protest erupted. The French are accusing the president of being deaf to their problems and dubbing him "the president of the rich". So, could one call him a true French patriot?

"I do not doubt a split second that Emmanuel Macron is a patriot", Chalandon underscored. "He certainly cares deeply for his country and his countrymen and has a vision for it. His personnel commitment to the job, a very rough one, is unquestionable, especially since he started having presidential ambitions at least 15 years ago. But he adamantly defended until now the rigid set of globalist values which have led to France's relative decline and the impoverishment of its middle class: this is what contributed to the perception of its apparent deafness to people's problems and needs".

© Sputnik
Macron’s Referendum to End Yellow Vests Protests Merely a ‘Gimmick’ - Journo
The private investor pointed out that "President Marcon has certainly measured the seriousness of the gilets jaunes crisis, and personally ordered the French state to fork out €10 billion ($11.4 billion) as a result", referring to wage increases and tax cuts ordered by the French president in December 2018. Commenting on the measure Prime Minister Edouard Philippe admitted that the move would increase the public debt.

"However the long-term resolution of the underlying issues will require him to be 'structurally deaf' to the widespread opposition that will erupt from all corners of civil society, when he confronts head-on the issue of the required drastic reduction of public spending and taxes", Chalandon explained.

The finance expert believes that the launch of the nation-wide debate by President Macron on French structural issues, including the level of public debt and taxes, "is a first-step response to the calamitous French perception that living off ever increasing debt is fine, and that someone else will pay for it".

"France has the lowest level of basic financial sense and knowledge in Europe as shown by a 2017 study sponsored by the German Allianz insurance group: this is a problem… French politicians have for the past 35 years, until Mr. Macron excluded, taken advantage of this form of educational underdevelopment by hiding economic facts, distorting the true state of financial affairs, often postponing any dealing with these issues, and when doing so, stealthily treating problems with solutions financed by hidden public debt", the private investor underscored.

Therefore, by launching the National Debate, "Mr. Macron is courageously starting to get to the bottom of this charade, and not without success since this debate is starting to show that debt is becoming an issue for French citizens, thus vindicating Mr. Macron's approach", the finance expert elaborated.

© Sputnik / Julien Mattia
A protestor wearing a yellow vest holds a banner during the "yellow vests" rally in Paris, France. So-called yellow vest protests — named after the obligatory attribute of French cars — started in mid-November and have evolved into a large-scale movement against government policies and rising living costs.

Recently, National Rally's Marine Le Pen called herself the spokesperson of the "real yellow vests" for the European elections, according to La Tribune.

Commenting on the report, Chalandon cast doubt on the assumption that the yellow vests had taken the side of the right-wing. Neither have they joined the left-wing, he believes.

"Whilst some gilets jaunes are members of these political adjuncts, or being manipulated by them, and even if these parties defend anti-globalist values that could attract some gilets jaunes, I believe that the vast majority of them are non-partisan and motivated by their pay check and real disposal income, which has been creeping down over the past years to unacceptable levels. It is therefore a major threat to established political parties, small or large", he said.

© REUTERS / Denis Balibouse
Yellow Vests Go International, Protest in Front of UN HQ in Geneva (VIDEO)
Referring to some beliefs that the yellow vests could be supported by some powerful elites in France seeking to oust President Macron, Chalandon expressed doubt "that there is a 'gang' trying to unseat Mr. Macron, similar to the one who tried to remove US President Donald Trump, or that the gilets jaunes are led by a mastermind acting behind the scenes, similar to the perceived role of George Soros in the globalist arena".

"With respect to the French 'elite', I do not know what this term encapsulates anymore", he said. "Under General de Gaulle, Georges Pompidou, and even Valery Giscard d'Estaing, there was a powerful elite, who rebuilt France: it shared a common body of values which was respected. Today, with few exceptions, there are various groupings fighting for a piece of a declining cake, using methods evidencing that they have lost their moral compass".

He admitted, however, that "there are a few French journalists whose specialty is to defame sitting presidents, and a larger set of newsmen who stubbornly indulge in making an issue of a storm in a tea cup, to stimulate readership".

"President Macron has started to reform France, albeit at a speed judged to be insufficient by a number of observers", Chalandon stressed. "He has been elected for 5 years, a tenured stint which is just about sufficient to start implementing meaningful reforms: he should be spared the ignominious attacks he withstood and be supported in his attempt to deal with the difficult challenge he faces".

Fabien Chalandon is non-executive chair of Telnic Limited currently living in Kyoto, Japan. In parallel to his investment banking carrier, he co-founded in France and ran a political think tank, Fondation Concorde, was awarded the French Legion d'Honneur in 2000 and wrote for leading French newspapers on political issues. His father, Albin Chalandon, served as minister of various governments under President Charles de Gaulle and Georges Pompidou and then minister of justice between 2006 and 2008 in a Jacques Chirac led government under then President Francois Mitterrand.