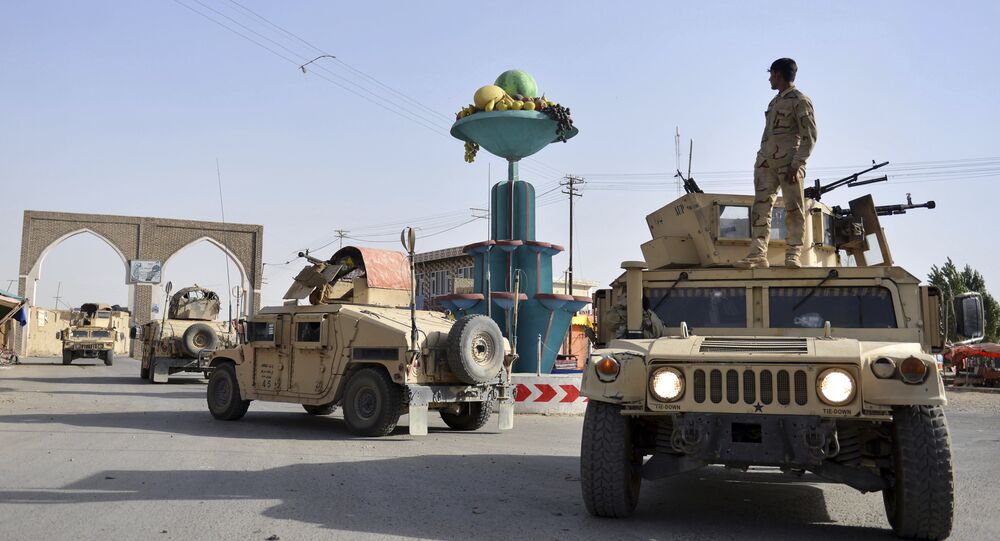 MOSCOW (Sputnik), Tommy Yang - Despite Beijing’s growing interests in regions neighboring Afghanistan, China is unlikely to be interested in replacing the US military's role in maintaining stability in the war-torn country, experts told Sputnik.

Under the BRI championed by Chinese President Xi Jinping, China has invested billions of dollars in infrastructure projects in the China Pakistan Economic Corridor (CPEC) and in Central Asian countries including Kazakhstan, Tajikistan and Uzbekistan, as part of the BRI’s goal to build an economic belt along the ancient Silk Road.

As Chinese investments expand in the region, peace and stability in war-torn Afghanistan have become increasingly important to safeguard Beijing’s growing economic interests in the region. Chinese soldiers have quietly monitored a border area between Tajikistan and China, which is an old passage into Afghanistan, the Washington Post reported this week.

Unwilling to Fill the Gap

However, despite China’s growing concerns over stability in Afghanistan and its possible security impact on Chinese economic projects in the CPEC and Central Asian countries, it is unlikely for Chinese leaders to be willing to commit to serious military assets to replace the role US military used to play in the country, political analysts told Sputnik.

"I think there’s a general understanding that China does not want to fill the gap that will be created by the withdrawal of US [troops]. That’s because they’ll be required to invest heavily in terms of a lot of capacity and infrastructure to be able to fill that gap, which I think they know they cannot. And I don’t think there’s that willingness on China’s part to fill that gap," Mariam Safi, director of the Organization for Policy Research and Development Studies (DROPS) based in Afghanistan, told Sputnik.

© AP Photo / Allauddin Khan
Analyst: US Should Work With Iran, Russia, China if They Want Stable Afghanistan
The United States announced in December 2018 that it plans to withdraw about 7,000 troops from Afghanistan within a few months.

The expert explained that the planned withdrawal of US troops from Afghanistan has indeed brought uncertainty about the nation’s stability and whether the increased security threats could hurt Chinese economic interests in the CPEC and Central Asia.

"When the BRI was launched, considering China’s extremely ambitious development initiatives in the region, including Central Asia or the CPEC, I believe there’s a large realization in China that we have to ensure there is stability in Afghanistan for us make sure: there will be no threats from Afghanistan on those economic projects. Also, if Afghanistan is stable, it would mean the region would become relatively more stable. The massive infrastructure projects under the BRI will be implemented smoother," she said.

Instead of boosting its military presence in Afghanistan, China has opted to play a more active role in peace negotiations in the country, Safi pointed out citing a comment from the top Chinese diplomat in Afghanistan.

"The Chinese ambassador to Afghanistan has expressed during a keynote address one of the reasons that China is now taking a more active role in facilitating intra-Afghan dialogue on the peace process with the Taliban is because they want to ensure there is stability for the BRI projects. He made that link. He expressed it openly," she said.

Following a series of high profile attacks carried out by Islamic extremists in China in recent years, including an inflamed SUV slamming into pedestrians at the Tian’anmen Square in the heart of the Chinese capital in 2013, Chinese authorities expressed concerns that the extremists could return to Western China’s Xinjiang province through Afghanistan.

© AFP 2021 / DIPTENDU DUTTA
China’s Xinjiang Region to Tighten Border Security Against Terrorists
In response to the potential threats, the local government in Xinjiang launched an anti-extremism campaign in April 2017.

Compared to carrying out military operations to root out possible terrorist cells in Afghanistan, Chinese authorities are better off stepping up security measures domestically in Xinjiang, Safi from DROPS suggested.

"In terms of preventing the movements of violent extremists groups from China to Afghanistan, they [Chinese authorities] would have to take action first on Chinese soil. They would have to be able to prevent and curb this. I believe it would be easier for the Chinese to manage this in Xinjiang first, before it seeks to do anything in Afghanistan. In terms of the various security forces are already in Afghanistan, you can imagine with American [troops’] presence here, having Chinese military here is going to be quite odd," she said.

Chinese political analysts added that the tight security crackdown in Xinjiang could be effective in dissuading the Islamic extremists from returning to the country from Afghanistan.

"After the tough security measures were introduced, we have not seen violent attacks in Xinjiang for almost two years. The number of Islamic extremists who try to return to Xinjiang after fighting in Syria has dropped sharply, as a result. They’re unwilling to return, because of the tight security situation in Xinjiang," Yang Shu, director of Central Asia Institute under Lanzhou University, told Sputnik.

In addition to sharing a similar view on the prospects of China’s military presence in Afghanistan, Yang from Lanzhou University pointed out that it is unnecessary for China to deploy its troops to Central Asia because Russian military presence in those countries is sufficient to maintain stability and ensure the safety of BRI projects.

"China’s limited presence on security related issues in both Afghanistan and Tajikistan cannot be compared to the role the US military or Russian military played in those countries, respectively. Compared to Russia’s military deployment in Tajikistan, China’s limited presence is not worth mentioning. I believe Russia has played a vital and irreplaceable role in maintaining stability in Tajikistan. The overall security situation in Central Asia does not pose any threat to China’s BRI projects, thanks to Russia’s role in the maintaining stability in the region. The job to maintain stability [in the region] has already been done. It’s unnecessary for China to do more," he said.

The expert added that threats for China’s BRI projects could come from "color revolutions" in Central Asian countries, which cannot really be resolved by Chinese military presence.