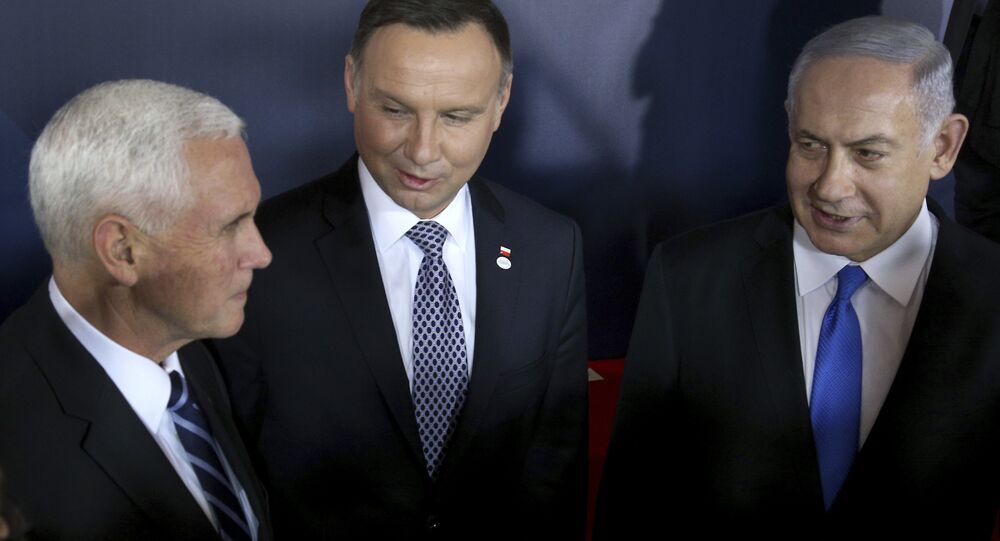 The recent Polish-Israeli row over Tel Aviv's Holocaust remarks is unlikely to affect Israel's relations with both the EU and Visegrad Group, Noah Phillips, a syndicated columnist and editor of The Jewish Examiner, told Sputnik.

On 18 February, a Visegrad summit in Jerusalem was cancelled over the Polish-Israeli diplomatic spat triggered by acting Israeli Foreign Minister Yisrael Katz's remark that the Poles were harbouring "innate" anti-Semitism and that "many" of them collaborated with the Nazis. Polish Prime Minister Mateusz Morawiecki denounced the minister's comments as "absolutely unacceptable" and "racist".

"Israeli-Polish relations have been deteriorating over some time now and it seems as though this situation is a culmination of long-harbored scorn between the two countries," Noah Phillips, commenting on the situation, told Sputnik.

© AFP 2021 / JANEK SKARZYNSKI
Israel Should Apologise to Poland for Anti-Semitism Remark - US Ambassador
The spat started brewing on 15 February when Israeli media cited Israeli Prime Minister Benjamin Netanyahu as saying that that the "Polish nation" collaborated with Nazi Germany during the Second World War; however, according to the Netanyahu's office, the prime minister obviously meant some "Poles" and was misquoted.

According to Phillips, the latest diplomatic spat is unlikely to affect Tel Aviv's relations with the Visegrad Group and the EU in general.

© AFP 2021 / Janek SKARZYNSKI
Czech PM Says V4 Talks in Israel Cancelled After Poland Refuses to Participate
He explained that "it's also unlikely to affect Israel's relations with the EU given the rationale for Poland pulling out of the summit: Poland was angered by Israeli Foreign Minister Yisrael Katz claiming that Poles played a part in the crimes against humanity perpetrated against Jews".

"This is something particularly contentious in Poland as the administration actively employs revisionism when discussing the role of some Polish nationals in the Holocaust; however, outside of Poland these statements are understood as fact no matter what Polish officials claim. Poland is in effect going rogue on the decision to not meet with Israel and the decision does not directly reflect the attitudes of other EU nations," Phillips opined.

At the same time, the journalist specified that "despite Europe's acceptance of the role of Polish citizens in the Holocaust", "on most matters pertaining to Israel the EU has adopted a staunchly anti-Israel stance (from tolerance of Palestinian Authority President Mahmoud Abbas' anti-Semitic remarks to unilateral furthering of economic relations with Iran and more)".

Therefore, according to the columnist, the bloc will, "in all likelihood, be accommodating of Poland's move-even if the reason for Poland doing so is not legitimate and recognized as such".

'Anti-Israel Sentiment in Poland is Immense'

Phillips opined that the recent Israeli-Polish diplomatic row and the cancellation of the V4 meeting is unlikely to backfire on Netanyahu either.

"Among Israeli political circles there has been bipartisan disdain for Poland's understating of the role Poles played in the Holocaust," he said. "As a result, Netanyahu shouldn't face significant internal criticism for the cancellation of the V4".

© AP Photo / Maxim Shipenkov, pool
Two Rivals, One Bloc: Analyst on How Israel, Iran Will Work With Russia-Led EAEU
As for the problem of anti-Semitism in Poland, the columnist opined that "at this point, the anti-Israel and anti-Semitic sentiment" there "is immense".

"It is outlawed to speak anything damaging of the Polish role in the Holocaust-an utter denial of historical facts," he said. "This absolves Poles of all historical responsibility in the Holocaust. There's also been a noticeable uptick in anti-Semitic activity which is somewhat legitimised by the government not taking culpability for Polish support of Nazis during the Holocaust".

Previously, Tel Aviv and Warsaw locked horns over a Polish draft legislation which criminalised blaming Poland for Nazi Holocaust crimes with a fine or a penalty of imprisonment of up to three years. The proposed bill also made it illegal to describe Nazi death camps in Poland as "Polish".

Auschwitz is the most bitter lesson on how evil ideologies can lead to hell on earth. Jews, Poles, and all victims should be guardians of the memory of all who were murdered by German Nazis. Auschwitz-Birkenau is not a Polish name, and Arbeit Macht Frei is not a Polish phrase.

​"There is no doubt that there were many Poles who fought the Nazi regime, but we cannot deny that Poland and Poles had a hand in the extermination," Israeli President Reuven Rivlin told his Polish counterpart Andrjez Duda on 18 April 2018, as quoted by Times of Israel.

During the Nazi occupation of Poland in the times of the Second World War the country was home to the Auschwitz Concentration Camps, a complex of over 40 concentration and extermination facilities built and operated by Nazi Germany and liberated by the Soviet Army in January 1945.