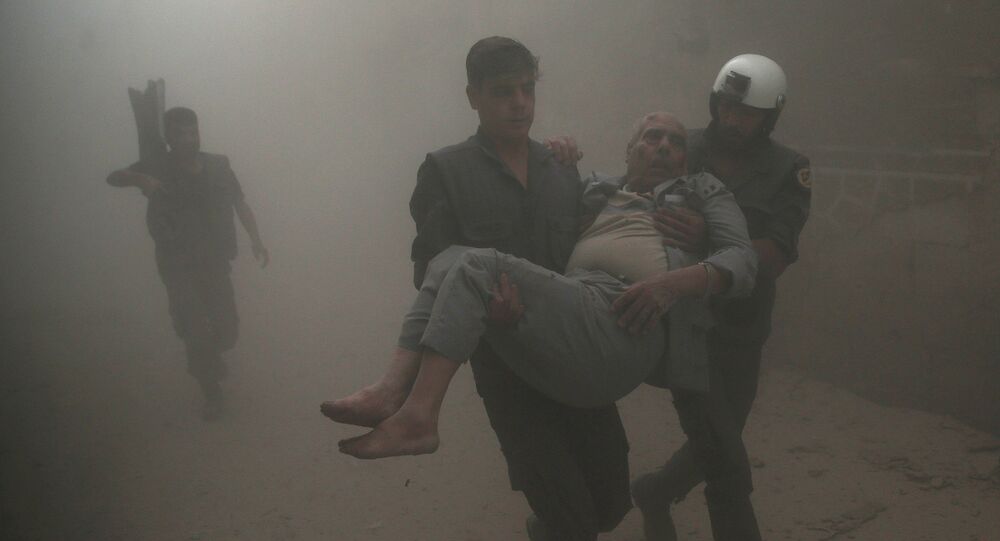 On 14 April 2018, Britain, France and the US launched missile strikes on Syria in retaliation for what they had said was a chemical attack allegedly staged by Syrian President Bashar Al-Assad on the Syrian town of Douma.

Reports at the time had alleged that up to 500 people had attended hospital on 7 April with "signs and symptoms consistent with exposure to toxic chemicals".

The main evidence cited was video footage of a hospital which claimed to show victims of a sarin or chlorine gas attack. Together with photographs of supposed gas cylinders, this visual evidence was held up by the international community as irrefutable proof that the Syrian government had been responsible for gassing its own people.

© REUTERS / Bassam Khabieh
BBC Producer Says Footage of Alleged Gas Attack Victims in Syria's Douma Staged
Despite skepticism from various experts on the genuine nature of the footage, calls from the Russian government to treat the evidence with caution and the fact that the OPCW found no concrete evidence of a chemical weapons’ attack at the Douma site, western leaders and media continued to push the narrative that the Syrian leader was indeed to blame.

Now a BBC Syria producer, Riam Dalati, has revealed on Twitter that he believes the footage of people being treated after the alleged chemical weapons attack in the Syrian city of Douma was staged.

Sputnik spoke with journalist Eva Bartlett, for more insight on the issue.

Sputnik: Are you at all surprised by the conclusions the BBC producer has come to regarding the alleged Douma attack?

Eva Bartlett: Well, actually I'd like to just note that Riam Dalati back when some of us actually went to Douma and talked to medical staff there and got confirmation from them that no chemical attack had occurred and also we spoke with people in Douma, with civilians in Douma, all of whom I spoke with said they had not seen or heard of any chemical attack.

At that time Riam Dalati was accusing those who went to Douma independently as pro-Assad conspiracy theorists.

Sputnik: What did you find when you were in Douma?

Eva Bartlett: When I went to Douma I spoke to Marwan Jaber who was a medical student who was present at the Douma hospital on April 7th — the day of the alleged attacks — and he said that patients' symptoms were 'not in line with the symptoms of a chemical attack'. There wasn't pupil constriction or broncho constrictions leading to death.

© REUTERS / Mohamed Abdullah
BBC Says Its Producer Expressed 'Personal Opinions' on Douma Incident
Then he went on to say the symptoms they received were all symptoms of choking — patients affected by the smoke of regular war injuries.

And I asked him if any of the hospital staff had been affected by treating these patients and he said no. The reason I asked that is because they were not wearing any specialized uniforms for dealing with chemical weapons' victims.

So he said that none of the hospital staff were affected and none of the patients had died, they were all sent home after treatment for regular dust inhalation injuries.

Sputnik: Why is there such a disconnect between the mainstream media reporting and what is happening on the ground in Syria?

© Photo : YouTube/Ruptly
UK Reporter: Douma Residents Laugh at Notion of ‘Chemical Attack’
Eva Bartlett: 17 civilians from Douma did go to the Hague and testify, including one of the boys which was shown in these videos that were going viral — Hassan Diab — and amongst the 17 civilians that were at the Hague there were medical staff and corporate media basically wrote them off as not credible — as Russian propagandists or something.

And this is the same corporate media that took as credible the same 7-year-old Bana al-Abed who was in Eastern Aleppo in the lead up to the liberation of Aleppo.

So there's definitely a double standard there.

Views and opinions expressed in this article are those of Eva Bartlett and do not necessarily reflect those of Sputnik.