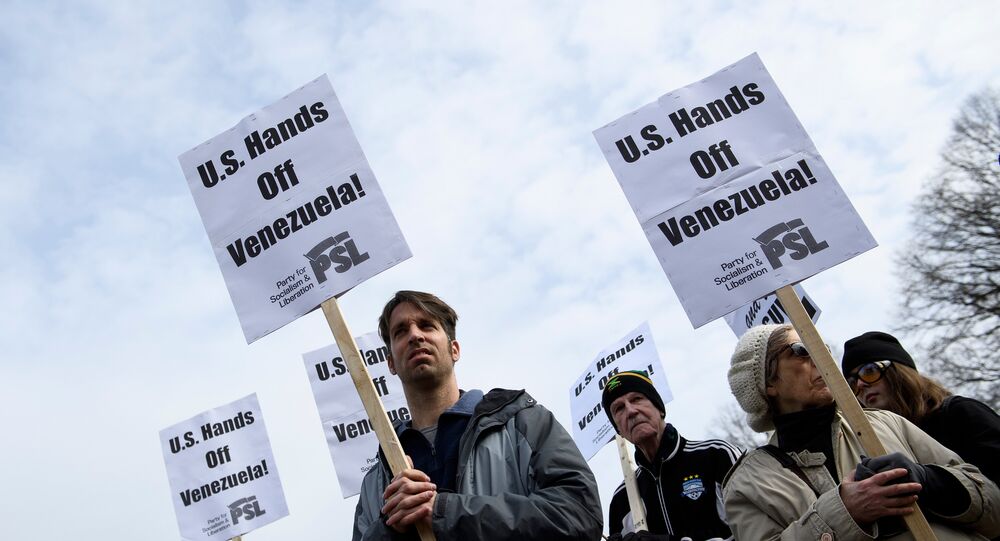 Russian Foreign Ministry spokeswoman Maria Zakharova today warned that the US could be preparing for military intervention in Venezuela using the pretext of humanitarian aid. She said the United States has been known to do this before and suggested that Colombia could be involved in orchestrating such an operation.

Maria Zakharova condemned what she branded as the US' highly confrontational behavior in Venezuela. She said that all means of informational and psychological pressure were being used; from manipulation and provocative media speculations to direct blackmailing and incitement to hatred. She said that the US was specifically targeting the armed forces to encourage mutiny.

The Foreign Ministry spokeswoman continued by saying, given US policy towards Venezuela, it now has not moral right whatsoever to lecture any other country on democratic values.

Sputnik has discussed the issue with political analyst Victor Olevich.

Sputnik: How much support would the US have if it did indeed intervene militarily in Venezuela?

© REUTERS / Luisa Gonzalez
US to Increase Efforts to Bring Humanitarian Aid to Venezuela - Special Envoy Abrams
Victor Olevich: The approach that Washington has taken in the last several months towards Venezuela and the political crisis in Caracas goes far beyond that which is allowed by international law.

In fact it is only Washington's closest allies that are taking action in support of Juan Guaido and are taking steps that egregiously violate international law.

Sputnik: What do you think we can expect from Ellliot Abrams, the US envoy to Venezuela?

© AP Photo / Marcelo Garcia
US Special Envoy Claims Ending Venezuela Crisis Necessitates Maduro's Resignation
Victor Olevich: The appointment of Elliot Abrams as coordinator of US policy to Venezuela speaks loud and clear of Washington's intentions when it comes to Venezuela.

He was involved in a number of US covert actions in Central America and his reputation fits quite well with the new coup that the United States is promoting today in Caracas.

Sputnik: What could the wider consequences be of US military intervention in Venezuela?

© REUTERS / Manaure Quintero
How to Justify Attempted Coup D’état in Venezuela Using Fake News? Directions from Pompeo
Victor Olevich: So if the US takes military action against Venezuela of course it will seriously complicate the situation in South America and in Latin America in general.

Of course if American Special Forces or elements of American special forces are involved in military action in Venezuela of course that also seriously will degrade the situation in that country and it will be another serious violation of international law.

Views and opinions expressed in this article are those of Victor Olevich and do not necessarily reflect those of Sputnik.