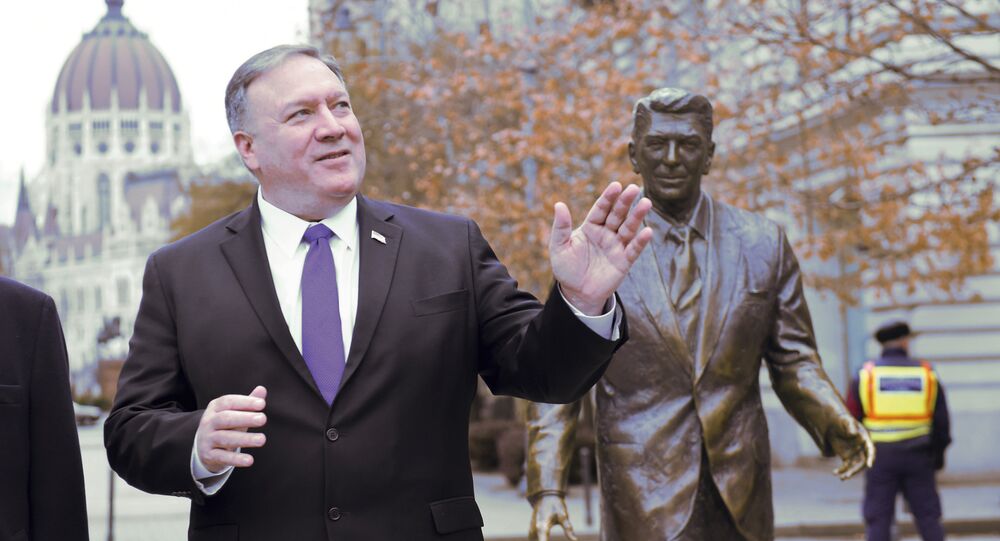 US Secretary of State Mike Pompeo began his Central European tour on Monday in a move described by the senior official as "correcting an earlier policy of absence." Sputnik discussed the matter with Dutch political activist Anneke de Laaf.

Sputnik: What is the main goal of Mike Pompeo's trip to Europe?

Anneke de Laaf: The Atlantic "alliance", NATO of course, but also the political alliance, is going through a rough patch. The original "alliance" was justified by a fear for "Soviet aggression". With the demise of the USSR a new raison d'être was required and after trying various alternatives, sometime after 2008 Washington settled on the obvious replacement, a resurgent Russia under a defiant and independent Putin. It was to ensure a return to cohesion, obedience, exclusive American (weapons and oil) sales, in short, the continued American dominance in Eurasia.

© Sputnik / Aleksey Nikolskyi
Pompeo Warns Hungary Not to 'Let Putin Drive Wedges Between Friends in NATO'
Obama especially pushed this agenda hard. But not all "allies" were happy to see a refound political and (profitable) economic partner become off limits. And where a belligerent Obama was able to force the unruly flock to accept the anti-Russia sanctions for example, protests have become more vocal and visible, eg. regarding Nord Stream 2, under the much weaker Trump, who is far less a natural "partner" for the EU/NATO elite.

Such defiance is detrimental to any organisation with a dominant leader. Pompeo has come to Europe to remind the "allies" of their obligations. The defiance cannot be allowed to develope into a full-blown rebellion.

Sputnik: How important is Europe for the United States at the moment and for the Trump administration in particular?

Anneke de Laaf: Europe was and still is the foundation on which the US built its hegemony. Although other continents have become important as well, they have proved less compliant and reliable to build an empire on.

I don't think Europe is of more importance to Trump than to the previous administrations. If it hadn't been for the Democrats blocking his plans, he would probably have directed his main focus elsewhere. Though that might have had negative consequences for certain sectors of the US economy, of course.

But Trump did promise to make the "partners" pay more for the privilege of being "in the club", and this seems to be one promise he intends to keep.

Sputnik: What's your take on the Hungarian diplomat's accusations of Western countries of hypocrisy when it comes to Russia?

© AP Photo / Andrew Caballero-Reynolds
Hungary Schools Pompeo Over 'Huge Hypocrisy' as He Warns About 'Putin Driving Wedges in NATO'
Anneke de Laaf: From what I read, it seems in part to refer to the difference in the relations long-time US allies such as France are allowed to have with Russia and the NATO new-comers can have. Hungary quite rightfully does not want to pay a greater part of the price for US policies than other NATO members. But is was a rather meek response, at the same time Hungary allowed greater access to its territory and agreed to pay more to NATO and buy more US weapons. And the diplomat did not — in public at least — tell Pompeo to stop interfering in Hungarian politics and media policy.

Sputnik: Why, in your view, is Pompeo taking a confrontational stance against Russia?

Anneke de Laaf: It'd be easy to say that that seems to be the American way these days. Of course, when you consider yourself the top dog and some upshot is sawing away at your chair, confrontation is an obvious response. And as the former Director of the CIA, Pompeo may genuinely see Russia as America's main adversary and thus solely as a dangerous enemy. With his military background, diplomacy probably isn't his strong suit.

READ MORE: US Hopes Pompeo Visit to Push Back on Russia Energy in Central EU, TurkStream

But in this case, the Trump administration must also avoid all suggestions of cooperation with Russia because of the Democratic accusations of Russian collusion. There is little or no room to maneuver. Sadly, even if this issue is settled, it may be long before any American government will be able to have a constructive relationship with Russia for fear of similar accusations. Hillary Clinton's and Barack Obama's hate campaign will have long shadows, I fear.

Sputnik: How does the Trump administration benefit from trying to fuel anti-Russian sentiment?

Anneke de Laaf: Internationally I think there is little to gain, certainly nothing that outweighs the loss that is incurred by such a destructive attitude. The end of the INF treaty also poses a very serious threat to the US, for example.

But nationally it may help Trump accomplish at least some of the things he promised to do if elected. He needs the cooperation of the Democrats and the Washington establishment for this. And they don't have much taste for detente at the moment. Plus it helps him get on the good side of one of the most powerful lobbies in the US, the military industrial complex. No US president can afford to ignore their interests for long.

Will Orban Lead Europe in Resisting US Dictates?

European, US Politicians and Scholars Denounce US Pressure Over Nord Stream 2