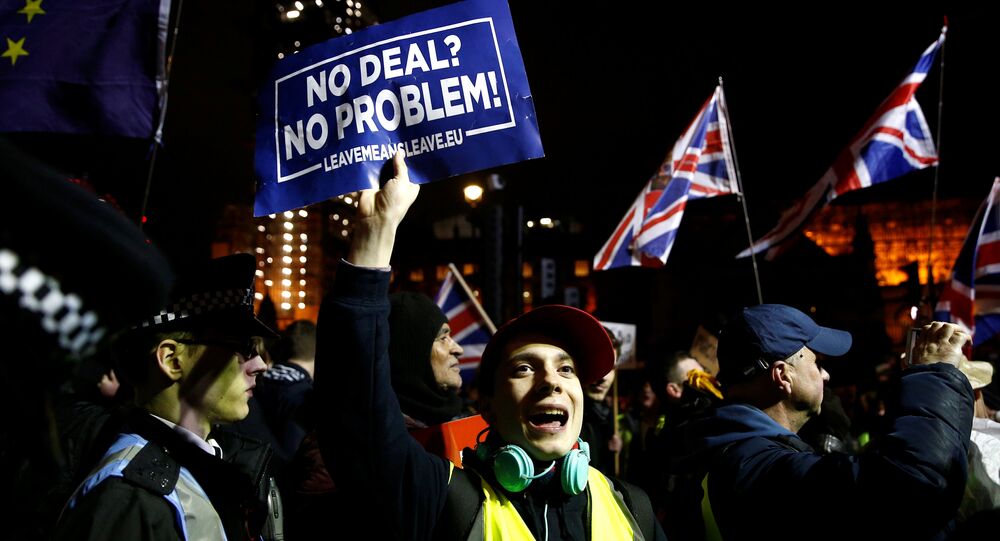 As the clock ticks down to exit day, Theresa May has told MPs to "hold our nerve" to force the EU to renegotiate a critical element of her Brexit deal. The EU has ruled out any changes to the divorce deal agreed in November but has hinted it could change the non-binding political declaration on the UK's future relationship with the bloc.

Sputnik has discussed the issue with Political Commentator Bob Lister.

Sputnik: Are there legitimate fears that Theresa May’s renegotiated deal could push movements to cancel Brexit or create a Brexit in name only?

Bob Lister: I think that there is so much of a lobby now; I mean task calling all Brexitiers to go to hell has really antagonized more to vote leave and this new Brexit parties has had 50,000 people join in a few hours following its launch.

We're funding many EU countries, Malta for example, asking Barnier to be more flexible and the German industrialists worry no deal could cost 150,000 jobs in Germany in the car industry.

© CC BY 2.0 / Free Images / Time Is Running Out For Brexit
Brexit Timeline: Here Is What You Need to Know
Sputnik: On the subject of a no deal, it’s an option that's been discussed a lot amongst the British population with recent polling still showing that a No Deal Brexit is the preferred choice of exit for the UK… with this in mind,  is a no deal an option that should that be considered by the government?

Bob Lister:  It should have been considered two years ago and it should have been planned for two years ago and that's the trouble, because May appointed Olly Robbins who's been a euro fanatic and we've had all the civil servants working against the country not accepting that we were actually going to leave and we're actually promising a no-deal if we didn't get the deal we wanted — they've been the problem to be honest.

You know it's all the people like Heseltine who receives 90,000 a year in farming grants from the EU and the Kinnocks who received a huge pension, all these people sniping May and the Brexit campaign have caused us to get a worst deal then we should have got.

If they had all unified and worked together, we would have got a much better deal from the EU than we've currently got.

Sputnik: You mentioned earlier the new Brexit party, do you think this will have much influence in actually controlling the Brexit debate? Do you think this party will help give an outcome the British people really want in terms of Brexit?

Bob Lister: I think so. Nigel's got Stephen Wolfe who I think very highly of as well on the team… yeah I think it could make a difference.

© REUTERS / Clodagh Kilcoyne
Tony Blair Warns No Deal Brexit Would Be 'Very Dangerous' for N Ireland's Peace Process
It certainly put pressure on May and cause her to think again but you know the more people to join the Brexit party the better.

It is fairly clear now a lot of people have left the Labour Party because a lot of Labour seats voted leave and clearly Starmer and the others are working against the leave populace so you know people are looking for new home basically, a new political home, I'm not sure that the Brexit party is the right name but because the concept is there.

We need a third party really, I mean the Lib Dems have done nothing for years; Labour and the Conservatives… people have lost interest in them not sticking to their manifestos so we need a new policy.

Views and opinions expressed in this article are those of Bob Lister and do not necessarily reflect those of Sputnik.