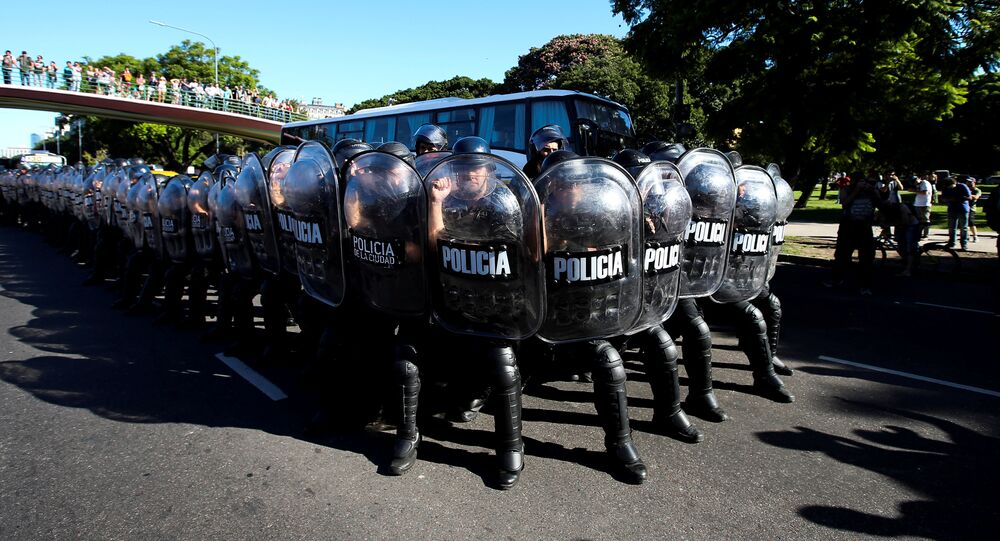 Self-proclaimed acting president of Venezuela Juan Guaido called for a mass march on Tuesday in memory of dozens who have been killed in various incidents since late January. Meanwhile, the US is in direct negotiations with members of Venezuela's military to convince them to abandon President Nicholas Maduro.

Sputnik: In your view, how successful will Washington be in trying to convince the Venezuelan military to withdraw their support for Maduro?

Scott Rickard: Well the US has been successful in the past. If you look at some of the work that they did in 2002, they attempted a coup against Chavez. In fact, one of the individuals that was involved in that coup is very much involved in this coup — Gustavo Diaz — from DollarToday. I think that what we see today is very similar to what they tried in 2002. Could they be successful? Absolutely. Money talks. That's really pretty much the way the CIA has operated since Hugo Chavez took over, you've seen a tremendous amount of economic warfare that's been coupled with the CIA operations and also the new democracy foundations. These types of think tanks and influence groups, including like the Cato Institute and other well-connected organisations in the United States have great ties to the banking infrastructure that has huge, huge investments in the Petróleos de Venezuela (PDVSA). So you see a huge tie to the American banking system and the fact that the Americans will attempt to bribe the military officers will be no surprise to me, obviously they've done this in the past in other countries as well and they'll continue to do so.

Sputnik: Is there any basis from the standpoint of international law that would support these actions?

Scott Rickard: Well absolutely not. In fact it's the contrary, you're looking at huge violations of international law. Unfortunately, these are partners in crime, you only have to look at the map of countries that are in cooperation with this coup against Maduro and this support for Guaido. The countries in cooperation are all very closely tied to the Western economic system as well as tied to the Western military industrial complex; that's really pretty much the way the world has operated, unfortunately, since the British Empire, which, in fact, the Americans inherited their military operations and strategies from, as well as foreign affairs policies.

Sputnik: What would then happen? Obviously there's probably some support for the petroleum sectors, the banking sectors, but how high is public support for this kind of intervention, which could actually lead to some kind of military intervention? I don't know, what are your thoughts on whether effecting regime change through whatever methods, of influencing the military, what would the consequences of that be?

Scott Rickard: Obviously the consequences would be grave for the individuals that would be at the other end of Western bombs. Certainly the chance of intervention and how high does it go as far as the involvement of the US, we've got both left and right-wing support for this in the United States. The Democratic and Republican parties are in unison because they're funded by the same individuals. We're talking about very highly-collected individuals at JP Morgan, at VanEck Vectors, these are extremely well-connected bond traders in the United States that have tremendous investments in Petróleos de Venezuela and they want a return. It's been quite some time that they've been holding these investments and they have a stranglehold on the American political system and the Western media. So as far as the public awareness of the actual facts, I'd say it's down around 0%, but the public awareness of the fabricated facts is probably well over 95%, with people who are paying attention actually believing the stories.

Scott Rickard: I don't think so. You can go back as far as like say Miles Copeland, he was a CIA operative who was trying to overthrow Assad's father working for the CIA for quite some time, and obviously not successful. There wasn't any kind of civil war, the war that happened in Syria was absolutely fabricated from different types of mercenaries. What we would see is more of a mercenary war, I think that's one of the reasons why Maduro is being very careful about letting in US aid or any kind of Western aid. The aid infrastructure mechanisms that the CIA uses is a way that they move in and they help influence and they smuggle in weaponry and smuggling in also, unfortunately, mercenaries. These mercenaries work alongside the US aid organisations. There's a lot of intelligence operations that have been imbedded in many of these organisations for decades. So I really don't think we're going to see a civil war inside the country between the people, the people absolutely don't want to kill their brothers and sisters but, unfortunately, what we may see is the same thing and the same old story that the United States have pushed not only in Syria, but certainly Libya, in Ukraine as well, and elsewhere around the world.

US Contact With Venezuelan Army to Change Its Stance Unacceptable - Moscow