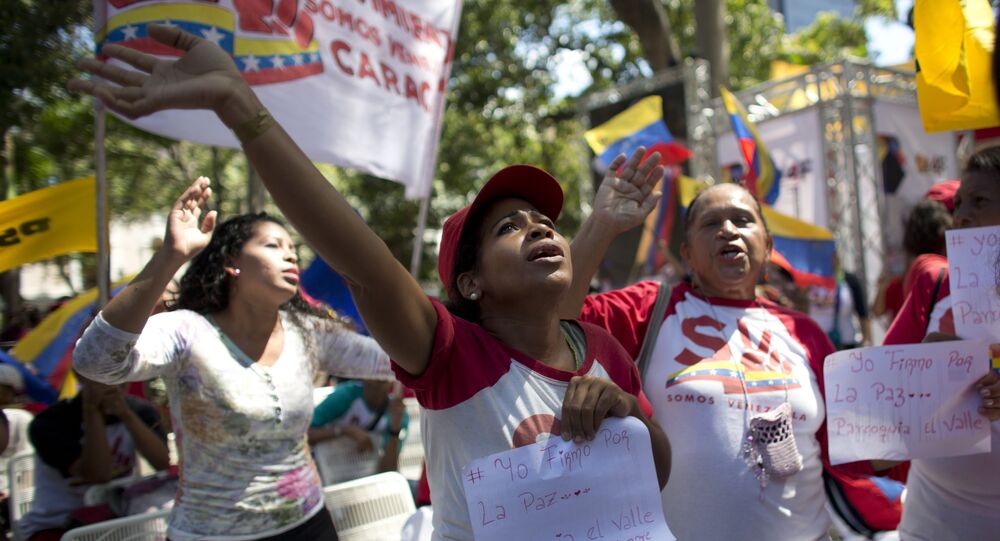 Russia has drafted a United Nations Security Council resolution in support of Venezuela. Russia's proposed statement expresses concern over outside interference in the nation's internal affairs and the territorial integrity of Venezuela.

This comes in response to the resolution proposed by the United States, which calls for a new presidential election in the country.

Sputnik discussed the future of Venezuela with Alfred de Zayas, professor of international law at the Geneva School of Diplomacy.

Alfred de Zayas: I am very concerned about what's going on because it's a very nasty chess game that's being played and, of course, the United States is waiting for Maduro to commit a major mistake so that the planned military intervention can go ahead.

© AP Photo / Marcelo Garcia
US Actions in Venezuela are About Controlling Region, Not Just Its Oil – Prof
It is quite correct to refer to the USAID program as a Trojan horse and I see Guaido as riding that Trojan horse. Of course, Guaido has no legitimacy because Article 233 of the Venezuelan Constitution does not confer on the National Assembly this competence to name an interim president, it's only if Mr. Maduro had died. And actually if Mr. Maduro had died, the succession would be in the hands of the vice president, not of the National Assembly; but again, the game has advanced and there has been diplomatic recognition of Mr. Guaido by the United States, by the United Kingdom, by France etc.

This is serious because, as you probably know, in international law only the head of state can request assistance from foreign countries in order to have a military intervention or military assistance. And the US has succeeded in muddling the waters. Guaido objectively has no legitimacy, but that will not prevent United States from using this fake law argument in order to proceed with its plans. It's Machiavellian and it's cynical but it's nothing new.

I mean USAID and the DEA and the National Endowment for Democracy, they just want to force-feed disaster capitalism on the rest of the world. Unfortunately, this is not just a violation of international law by the United States, but the United States is dragging in other countries that are ostensibly committed to democracy, the rule of law, human rights, et cetera, so what we're having here is a revolt against international law by a considerable number of states which reminds us, of course, of the run up to the 2003 invasion of Iraq, which the late Secretary General Kofi Annan then referred to as an illegal war. It was not only Tony Blair and George W. Bush who violated Article 2 Paragraph 4 of the UN Charter, they dragged in 41 other states, the so-called "coalition of the willing". So if you are a believer in international law and in stability and when the Germans call rechtssicherheit (legal certainty), we are actually witnessing a breakdown of the international order.

Sputnik: Professor, we've heard a lot of rather provocative statements made by Juan Guaido, he's been calling for volunteers' help to open humanitarian aid routes, could there be a chance there might be clashes between volunteers and government troops?

Alfred de Zayas: Certainly the government will do its utmost to prevent such clashes. Obviously, this is a provocation and when you have someone like Guaido who is trying to create an incident, it is not out of the question that there may be false flag events at the frontier.

What shocks me here is that the United States, its sanctions, the financial blockade are the direct cause of the so-called humanitarian crisis. Now it is very [hypocritical] to cause a situation of hunger and malnutrition and scarcity of food and then to say, "Oh, we're going to provide you now with the food and medicines that you need." So it's very insulting for a sovereign country to accept that kind of treatment.

© REUTERS / CARLOS EDUARDO RAMIREZ
Caribbean States Worried About Worsening Situation in Venezuela - Trinidad Prime Minister
We're used to the United States promoting right-wing coups in Latin America, we've seen them in Honduras, in Paraguay, the attempt in Nicaragua, etc. So what is shocking is that Luis Almagro, the Secretary General of the Organization of American States, has evidently placed the OAS at the service of the United States and at the service of the 1%. I mean, it has nothing to do with human rights in Venezuela, it has to do with Venezuelan oil. I mean this is a bonanza for business, it is a bonanza for transnationals. If they topple the government, the first thing that is going to happen is privatization, not only of the oil industry, but of gold and bauxite and all the natural resources of the country that hitherto have been available for the people, but now they will only be available, of course, for the 1%.

This reminds you of the coup that the United States co-financed in the year 2002 against the then-President Hugo Chavez. It was only 48 hours that Pedro Carmona overthrew Chavez, but in those 48 hours he abolished 49 pieces of social legislation, he did his utmost to turn the clock back so we have here the return to the good old days when the rich were rich and the poor were poor. And if you think in terms of democracy, Pedro Carmona abolished the Supreme Court, abolished the Chavez National Assembly, dismissed the governors, ect, ect. Something similar could occur if Mr. Guaido takes over. The problem is I don't see that happening, I see a civil war.