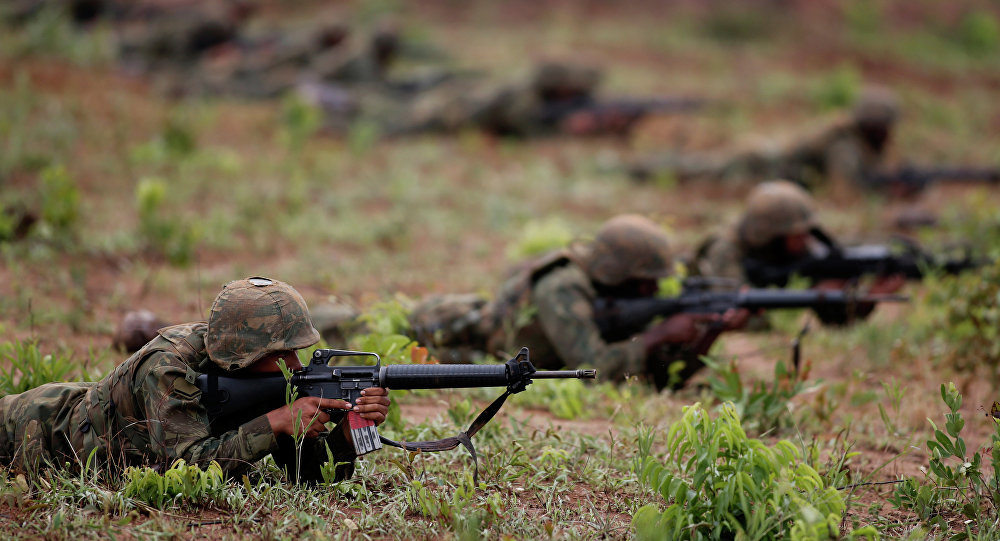 During a visit to the United States, Brazilian Foreign Minister Ernesto Araujo held a number of important meetings, including with John Bolton and Mike Pompeo. However, according to an expert interviewed by Sputnik, this does not mean that Brazil will embark on American "adventures" in Venezuela.

After the meeting with the Brazilian minister, Bolton tweeted that "the US-Brazil alliance is stronger than ever" and noted that "mutual support for interim president Juan Guaido" and "logistics of humanitarian aid to the Venezuelan people" had been discussed at the meeting.

Just met with Brazil’s Foreign Minister Araujo at the White House. We discussed mutual support for Venezuela’s Interim President Guaido, including logistics for providing humanitarian assistance for the Venezuelan people. The United States-Brazil alliance is stronger than ever.

For his part, Ernesto Araujo has not commented on the meeting with John Bolton or the subsequent meeting with US Secretary of State Mike Pompeo over social media.

Mauricio Santoro, a political scientist, foreign affairs specialist and professor at the State University of Rio de Janeiro (Universidade do Estado do Rio de Janeiro, UERJ), believes that this "silence" can be explained by caution and moderation. In an interview with Sputnik, the professor called the Bolsonaro government's attitude toward statements made by the American authorities "childish" enthusiasm.

"It is clear that for ideological reasons, in view of the fact that the Bolsonaro government is seeking rapprochement with the United States, this had influenced the way Brazil responded to the crisis in Venezuela. This is a very difficult question, a very difficult topic that must be discussed with great caution, yet we often see that Brazil is embracing ‘childish' enthusiasm for American statements, and this is dangerous", the professor said.

© REUTERS / Carlos Garcia Rawlins
Venezuela's Guaido Calls Street Rally for Saturday to Welcome Relief Aid
Earlier, in an interview with the CBS, Trump said that sending the military to Venezuela is being considered as "one of the options". Add to this the comment on Bolton's notebook about "sending 5,000 troops to Colombia", although the Pentagon has refuted this information, and the fears grow that they will try to use force against Maduro.

According to Mauricio Santoro, all the White House rhetoric against Venezuela should be perceived as an instrument of political pressure, just as happened recently with the war of words between Donald Trump and North Korean leader Kim Jong-un.

If the US does decide on a military invasion, what would Brazil's actions be? The analyst warned that Brazil is unlikely to get support from its neighbours in the region.

"If this happens [a military invasion], even if the Bolsonaro government has this intention, to maximise Brazil's turn to the United States, the negative perception of this invasion will be so strong in Latin America that Brazil will eventually stand aside, even with all the government's desire to see something like this happening", the analyst believed.

The moderate position recently taken by Araujo is explained by the military's influence on the Brazilian Foreign Ministry, the expert said.

"We have never had a foreign minister who would have treated a foreign political leader with such enthusiasm […] In other words, if there wasn't this pressure from the military, it is not known what Araujo would do, what would be the foreign policy today. But, undoubtedly, the military highly values moderation, and is trying to restrain the government's most ardent initiatives in foreign policy", Santoro said.

Last Sunday, the Brazilian newspaper Folha de São Paulo published an article stating that the military from the government of Bolsonaro is "looking after" the Foreign Ministry, especially when it comes to Venezuela. At least two important generals are constantly talking with Araujo to monitor his activities.

© AP Photo / Eraldo Peres
Brazil Rejects Possibility of Military Operation Against Venezuela - Reports
The military has not trusted the foreign minister from the start. On 4 January, during a meeting of the Lima Group in Peru, Araujo supported a document in which "the cessation of military cooperation with the Nicholas Maduro regime" was mentioned in one of the clauses. This caused discontent among the Brazilian military that has learned more about the situation in the Maduro government from the Venezuelan military than through diplomatic channels.

The issue of deploying US military bases in Brazil, mentioned by Bolsonaro in an interview with the channel STB and supported by Minister Araujo, also worried the military, who immediately called this measure superfluous and inappropriate. Even the current vice president, a retired Brazilian Army General Hamilton Mourao, is acting in a way to change the Brazilian foreign policy position.

Not only the support of the western position but also the lack of experience is affecting Araujo's activities, the specialist said.

"He was never an ambassador abroad. He never headed an embassy abroad, which is why it also makes him weak in internal disputes. The military gain the upper hand, being more experienced professionals, being able to exert more influence than the foreign minister himself", Santoro added.

"I believe there are two possible options: either he becomes a more moderate figure, close to the views of the military, who can work together with the Minister of Economy [Paulo Guedes], or I think he will be removed", the expert said, stressing that at present there is a conflict within the government itself between the military and the ideological wing.

Santoro is inclined to believe that softening Araujo's position on Venezuela, as opposed to his hidden and well-known Trumpism, will play a major role in his survival as the Brazilian Foreign Minister, at least in the near future.