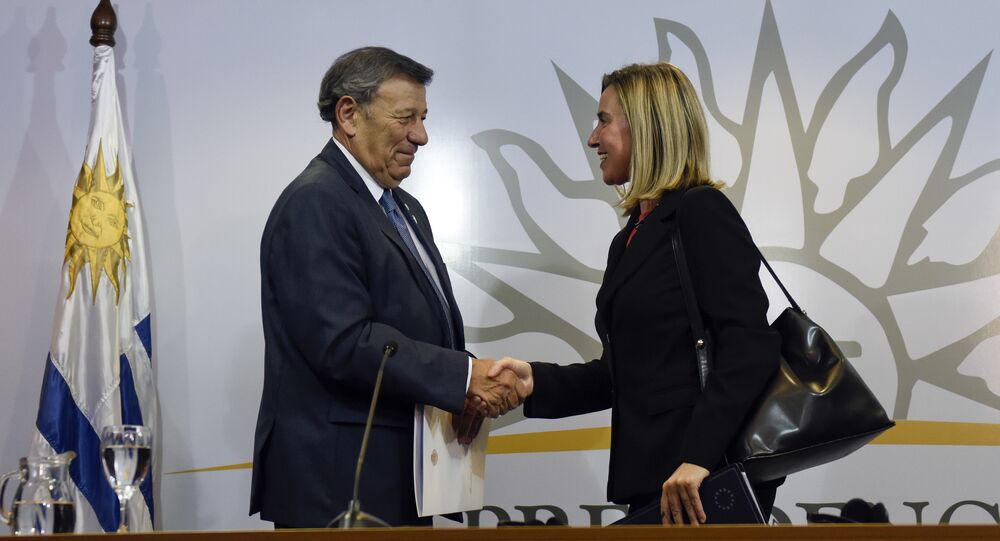 On Thursday, representatives from over a dozen countries met in Uruguay for a conference of neutral nations on the Venezuelan crisis. Their goal is to find a common ground for dialogue in the situation that rapidly approaches either military intervention or civil war.

It's been dubbed the "Montevideo Mechanism" by Uruguayan Foreign Minister Rodolfo Nin Novoa; he and his Mexican counterpart, Marcelo Ebrard, organized the conference of the International Contact Group to jump-start negotiations in Venezuela, where self-proclaimed Interim President Juan Guaido enjoys international backing in his claims from the United States and a host of other nations, but little credibility in the streets of the country itself. However, massive crowds have demonstrated against President Nicolas Maduro for a variety of reasons related to the country's political and economic crisis, facilitated in large part by drastic US sanctions.

Representatives from seven European countries — France, Germany, Italy, the Netherlands, Portugal, Spain, Sweden, and the UK — joined numerous Latin American nations, including Bolivia, Costa Rica, Ecuador, Mexico, and Uruguay and representatives from Caricom in the Uruguayan capital for the conference.

Aline Piva, journalist and member of Brazilians for Democracy and Social Justice, joined Radio Sputnik's Loud and Clear to discuss the conference and the different tendencies in the Venezuelan opposition.

​Piva told Sputnik the goal of the conference was to create a "neutral zone" where all parties involved could "start from zero, without previous demands, without getting demands from the United States or Guaido or even the Venezuelan government."

"What has been happening so far," Piva said, is that "when the opposition goes to the dialogue table, they come with a set of demands that goes against the Venezuelan constitution… and the Venezuelan government, Maduro's government, has said, ‘We are open to dialogue, but we do not want to attend to your previous demands.' We need to start negotiating from zero, because that's how a negotiation starts. You cannot expect to have negotiations if the demands of the opposition are the resignation of Nicolas Maduro, so it doesn't set a very good precedent, there."

However, Piva noted that the Uruguayan-Mexican proposal was welcomed by Caracas but rejected by Guaido.

"It's important to note that it's not the whole of the opposition" involved in Guaido's coup attempt, Piva told hosts Brian Becker and John Kiriakou. "For example, the vice president of the National Assembly has declared that he does not support Guaido, that he thinks this is a coup attempt, and they do not want this course of action."

"So when we talk about opposition here, we need to make a distinction between who we are talking about. There is this more extreme right-wing opposition, represented by Freddy Guevara, Juan Guiado, Leopoldo Lopez, María Corina Machado, and that opposition, they are extremists; they are completely aligned with US interests, and they don't want any kind of democratic solution for this political crisis. They want a coup," she said, "by any means necessary."

In the May 2018 presidential elections in Venezuela, Falcon, a former member of Maduro's United Socialist Party of Venezuela (PSUV), was the president's number one challenger, taking 1.9 million votes, roughly 21 percent of ballots cast. However, after the election he rejected the results, denouncing them as "illegitimate" and calling for a new election.

In fact, Piva said, "Venezuelans love elections!" She noted there had been 25 elections of various types in the past 20 years in the country and that Maduro had proposed new National Assembly elections in response to Guaido's call for another presidential election. "The election system here in Venezuela has been verified by several international observers, and they really recognize elections as a way for the people to express their political will. So, having elections for the National Assembly would make these two bodies, the Constituent Assembly and the National Assembly, could rule together to compose the new constitution of the country."

"So, that was actually Maduro calling the opposition again to get their mandates verified by the people and not staying forever in office without having to consult the people."

Piva noted that while the Lima Group was not taking military intervention off the table, armed conflict was also not an imminent threat, at least from Colombia, because of the "huge political cost." Even within the 14-nation Lima Group, formed in 2017 explicitly to facilitate regime change in Venezuela, there isn't a consensus on a military solution to the crisis. "I think they are waiting to see how things unfold to then take that step," Piva said.

However, the journalist also noted that the side of the US and Guaido doesn't "have internal support to keep going for much longer. When you look at the rallies, for example, that we had last Saturday here in Caracas, it was expressive, the rallies in favor of Guaido, but the rallies in favor of the government of Nicolas Maduro against intervention were much, much bigger than those."

"But, the thing is, I think they reached the point where it's very hard to now just roll back what they are going to do," Piva said. "Are they going to admit, ‘Yes, we are sorry, Nicolas Maduro is actually the legitimate government.'"

"So there are two options that I see here: they come to the dialogue and find a negotiated solution, or Guaido simply disappears, as happened with Freddy Guevara and other members of that radical opposition that just disappeared out of the political scene."