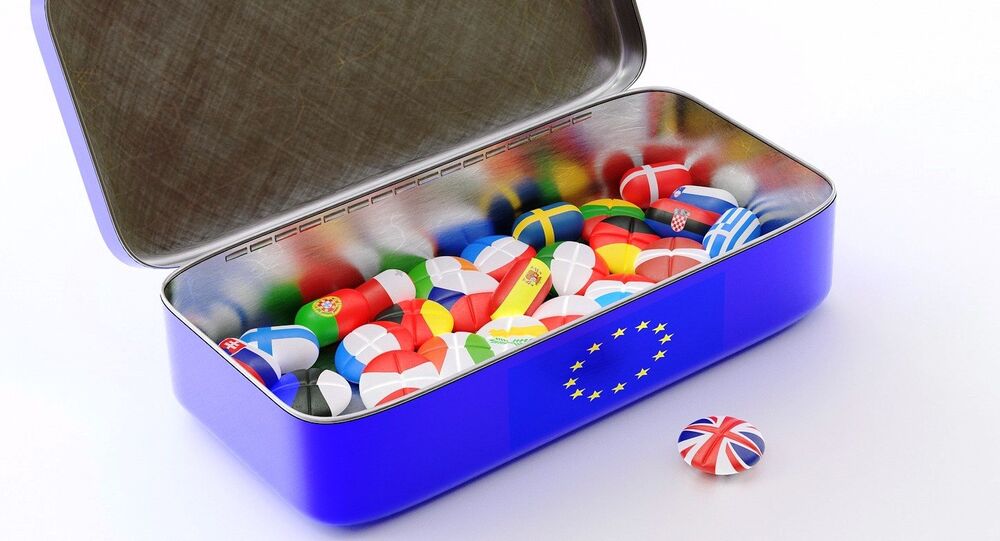 British Prime Minister Theresa May is set to urge EU leaders to introduce changes to the terms of the Brexit agreement concerning the Northern Ireland backstop.

Radio Sputnik has discussed the development with David Collins, professor of international economic law at City, University of London and author of Negotiating Brexit: The Legal Basis for EU and Global Trade.

Sputnik: Brussels, as we have heard the last couple of days with Donald Tusk, is adamant about the withdrawal deal and he is saying that it cannot be subject to renegotiation. What could Mrs. May hope to achieve from the European Union's top figures with this return visit? Why is she going back? It just sounds absolutely futile. Why doesn't she just accept that there is going to be a no-deal and get on with it?

© AFP 2020 / Paul Faith
'We've Been Down This Road Before': Ireland in Tune With EU in Rejecting London's Brexit Plea
David Collins: Yes, I think that is the case. It looks highly unlikely that she will get anything meaningful from the EU and I think she knows that. So I think there is a certain element of theatre to it that she is showing her constituency back at home that she is trying her best.

Then she will come back to Parliament and what she will probably get is something cosmetic, something very superficial. It will probably be some extra words added to the political declaration, which, as we all know, is not legally binding and the EU will throw her a few words, a few clarifications here and there, and then she is going to try to depict that to Parliament as having been securing a major concession which, of course, it won't be and I don't think it is going to fool anybody.

Sputnik: Do you believe that Brexit is going to be delivered or is it all just going to fall to dust, so to speak?

David Collins: Yes, that is the essential question. I think we will get Brexit, but I am beginning to suspect that we won't get it on 29 March. I have a feeling that there is going to be an extension, probably of a few months.

I don't really know what that will achieve. I think we may see ourselves in exactly the same position. In fact, we may be having the same conversation on the air in July or August, saying "oh, is it now really the end?" What I suspect might happen is the can will be kicked down the road a few more times. We may even get yet another extension.

But ultimately, if you get 2020, [or] something like that, they will have to bite the bullet on it and I do think we will leave at some point, but it will probably be a soft leave and it will be some kind of a fudge — which would maybe be fine, I just wish that we could get it earlier rather than later.

Sputnik: Let me ask you a question about the Labour Party and Jeremy Corbyn. We have got that he is being controlled by his Labour Party in saying that he is happy to have cross-party discussions, but [that] he is not going to allow a no-deal Brexit solution. What is your take on that?

David Collins: Yes, poor old Jeremy, he really can't seem to have to get his act together, he doesn't know what to say from one minute to the next. It must be really hard to be a Jeremy Corbyn supporter or Labour supporter, because you have absolutely no idea what the party stands for.

The Conservative Party is badly divided, as we know, but the Labour Party seems that it is almost at an individual level, each politician, each MP doesn't really know what they believe. So he is a massively hard-core Brexiteer, I think we know that. I mean he is as much of a Brexiteer as Jacob Rees-Mogg is, really, and I think we all know that.

© Photo : Twitter, Ireland Simpsons Fans ‏
Irish Simpsons Memes Roast British Politicians, Brexit & the Royals
I think what he is trying to do is [that] he is trying to depict himself as plausibly being some kind of a Remainer, so that if anything bad happens, he doesn't have to take responsibility for it; and if anything good happens, he can then say: "oh, well, this is the result that I got you and I stuck to my guns and I delivered Brexit". So he is doing his best chameleon interpretation. But now that we have such ready access to old statements, it is really just a bit of an embarrassment, isn't it?

But he is definitely a Brexiteer and the statement that he came out with today was something really absurd, along the lines of: "oh well, we will have a Brexit, but we will stay in the customs union and the single market, and we will participate in the EU institutions". So what it seems that he is doing now to fool the most people that he possibly can, is calling it Brexit, but actually not being a Brexit.

So he is hoping that he is going to secure support from both the Brexiteers and the Remainers by doing that. But nobody is that stupid to [not] see through that stunt and I honestly don't think anybody is taking him seriously right now.

Sputnik: At the end of the day, the Ireland border situation is really the one that is going to either live or die in terms of the Brexit. Now several US congressmen have urged Mrs. May to uphold the Belfast Agreement if she wants the UK to have a trade deal with the US. Obviously, that is in terms of trade deals for the UK moving forward, but what do you make of this ultimatum?

David Collins: Yes, it is another way of putting pressure on the government. Making the Irish border, peace in Ireland a Brexit issue was an absolute masterstroke on the part of the EU. Whoever came up with that — and I think some people have identified one or two people who it might be and I couldn't tell you on the spot — whoever came up with that is a genius, because they singlehandedly derailed the Brexit process and put all of the control in the hands of the EU by making that an issue and frightening people.

© CC0
Economist: 'Practically Nothing' Is Going to Change After Brexit
Nobody wants the peace process in Ireland to be harmed. Nobody wants a hard border. Nobody in the UK, in Europe, in America, anywhere wants that. But the idea that there is actually a risk of war in Ireland, or a return to the way it was in the old days in Ireland because of Brexit is absolutely absurd. We do not need a hard border.

I and other Brexit supporters can only say this is a thousand times: "you do not need a hard border in Ireland to have a differential regulatory regime between Northern Ireland and the Republic of Ireland"; the border can be handled with technology and removing inspections from the border. We know this. We've had testimony in Parliament about it. It could be done, but it is not something that anyone seems to be willing to actually explore or follow through it.

Views and opinions, expressed in the article are those of David Collins and do not necessarily reflect those of Sputnik

Brexit: EU’s Juncker Says There’s No Way to Have Unilateral Exit From Backstop