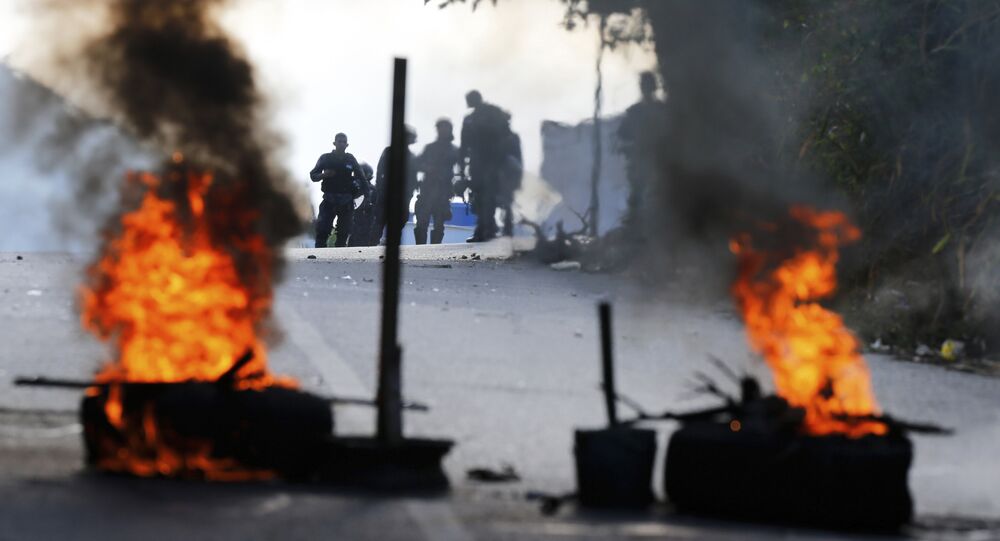 On 4 February, the Lima Group of nations called on the Venezuelan armed forces to allow the entry and transfer of humanitarian aid to the county's opposition. The Lima Group, which is comprised of 14 member states including Canada, met in Ottawa on Monday for emergency talks on Venezuela and called for an urgent delivery of humanitarian aid.

Colombia's National Unit for Disaster Risk Management (UNGRD) announced that a single command post will be established in Cúcuta to coordinate the logistics process for receiving and storing humanitarian aid destined for Venezuela after opposition lawmaker and self-proclaimed interim president Juan Guaido declared the need for "immediate international assistance".

© AP Photo / Ariana Cubillos
Russia Warns Military Interference in Venezuela's Internal Affairs 'Worst Scenario'
Humanitarian support from the United States and Canada represents a dangerous scenario for Venezuela, whose borders are still protected by the army, while neighbouring countries, such as Colombia and Brazil, support "help" from the opposition. This gesture is "based on a demonstration of power," according to Argentinian journalist Pedro Brieger.

In an interview with Sputnik, he said that "in Venezuela, the opposition is organising humanitarian aid not only because of the needs of the population but also in order to demonstrate strength and give Juan Guaido some characteristics of a government".

Brieger believes that behind all this "there is a power game" going on.

"If this really was about humanitarian aid, this would have to be decided between the United Nations and Venezuela's government. But we understand that this is a political manoeuver that can complicate the situation if [help] goes through Brazil or Colombia", the expert emphasised.

Meanwhile, Montevideo is preparing to host a meeting on Thursday, 7 February among those countries that are in favour of a diplomatic solution to the crisis in Venezuela.

Brieger noted that it is difficult to predict what will happen at this meeting, "because today a political offensive with the goal to overthrow the government of Maduro is in the minority in Latin America".

"A diplomatic solution will help avoid a civil war, as the most recent examples of parallel governments show it has led to wars, as was the case in Libya and Syria. Therefore, governments in Mexico and Uruguay realise that further polarisation and even sending humanitarian aid to Venezuela from the United States, and not the United Nations, exacerbates Venezuela's domestic and regional policies", the expert said.

© REUTERS / Carlos Garcia Rawlins
Pompeo Hopes Venezuela to Be Independent From Cuba, Russia After Change of Power
In addition, he stressed that Venezuela's opposition does not want to engage in a dialogue with the government, and it has felt support for this from the Lima Group, the United States and the Secretary General of the Organisation of American States (OAS), Luis Almagro.

However, Brieger noted that the problem of the Montevideo summit is that it's not an official group.

"The Lima Group can put a lot of pressure on it, since it is made up of several of the most important countries in the region, such as Argentina, Brazil, Colombia, etc., while the meeting in Montevideo is not a recognised body that can make a political decision, like the United Nations", the journalist explained.

With regard to calls to hold new presidential elections, Brieger said that this is a "very difficult" request.

"The Maduro government says that elections were held last year, and they had won them, while the opposition does not recognise the legitimacy of these elections just as the National Electoral Council, and has requested to hold new elections (…) with such rules of the game that they will be able to control", the Argentinian journalist told Sputnik.

Brieger is confident that the government will not accept these terms and the opposition's bid is also quite risky.

"The opposition is setting up a trap by calling for free elections because it is confident of its win, but it can lose. It underestimates the power of support for Chavismo", Mr Brieger concluded.

© AP Photo / Fernando Llano
Italy Against Any Foreign Interference in Venezuela’s Affairs - Deputy FM
On Sunday, Venezuelan President Nicolas Maduro proposed to hold early parliamentary elections. This comes after Juan Guaido declared himself interim president of Venezuela on the 23rd of January. Guaido has been recognised as the country's leader by the United States, Canada and key Latin American and European states, while democratically elected Maduro is recognised by China, Mexico, Turkey, Iran, Russia, and others.

The views expressed in this article are solely those of Pedro Brieger and do not necessarily reflect the official position of Sputnik.