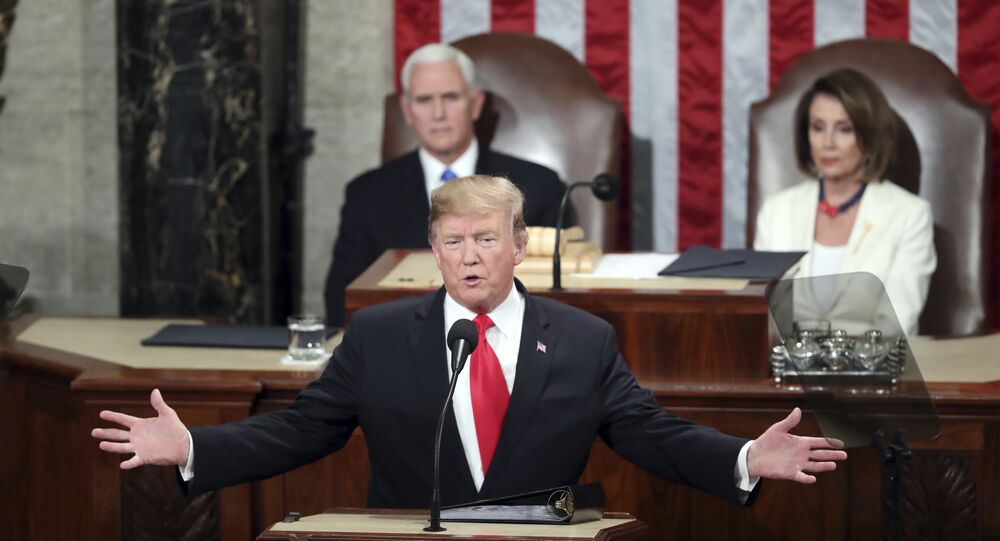 On Tuesday, US President Donald Trump delivered his second State of the Union address before a joint session of the US Congress.

​Trump promised to get funding for southern border security, also noting that he has already sent Congress a "common sense proposal" during his Tuesday address.

"In the past, most of the people in this room voted for a wall — but the proper wall never got built. I'll get it built," Trump told Congress, adding that the border wall with Mexico to curb illegal immigration will be "a smart, strategic, see-through steel barrier — not just a simple concrete wall."

"Legal immigrants enrich our nation and strengthen our society in countless ways," the president said. "I want people to come into our country in the largest numbers ever, but they have to come in legally."

According to Luqman, Trump's speech appeared to be more him making a case for declaring a national emergency in a couple weeks than a typical State of the Union speech.

"That was ‘a case for declaring national emergency in a couple of weeks' speech. That was a 2020 campaign speech. It was one of the most nationalistic, divisive, hateful speeches that I have heard in a very long time from a sitting president. The things that he said in regards to immigrants and immigration, just the most hateful, blatant lies. He knows he's not able to make a case to anyone who is already opposed to him and his policies. He's just trying to encourage his base to stick with him and support him… so he can continue to trample on civil liberties," Luqman noted.

On January 25, Trump announced that a deal had been reached to reopen the US federal government, which had been shut down for more than a month. The proposal provides funding until February 15, after which he said he will use his "emergency powers" if doesn't "get a fair deal."

"Trump is like an unformed man's caricature of Hitler, and I know that's extremely inflammatory, but that is exactly what I thought last night when I heard him say these horrible things," Luqman added.

"There was a strain of comments throughout his speech that spoke directly to the conservative Christian evangelical community. There was a reason he brought up that Alice Johnson… became a minister in prison," Luqman added.

During Trump's speech, he said that Johnson, whom he granted clemency after Kim Kardashian West asked him to do so during her visit to the White House in May, spent her time in prison as a minister.

"She had a big impact on that prison population — and far beyond. Alice's story underscores the disparities and unfairness that can exist in criminal sentencing — and the need to remedy this total injustice," Trump said.

Johnson was convicted in 1996 on eight criminal counts related to a Memphis-based cocaine trafficking operation. She was sentenced to life imprisonment in 1997.

"And then he talked about the late term abortion issue, and he made sure to mention that babies are made in the image of a holy god. Then he talked about Israel and moving the embassy to Jerusalem. All of that language was directed at the conservative, Christian, very right wing, very pro-Zionist religious community in this country, and it was so disingenuous," Luqman added.