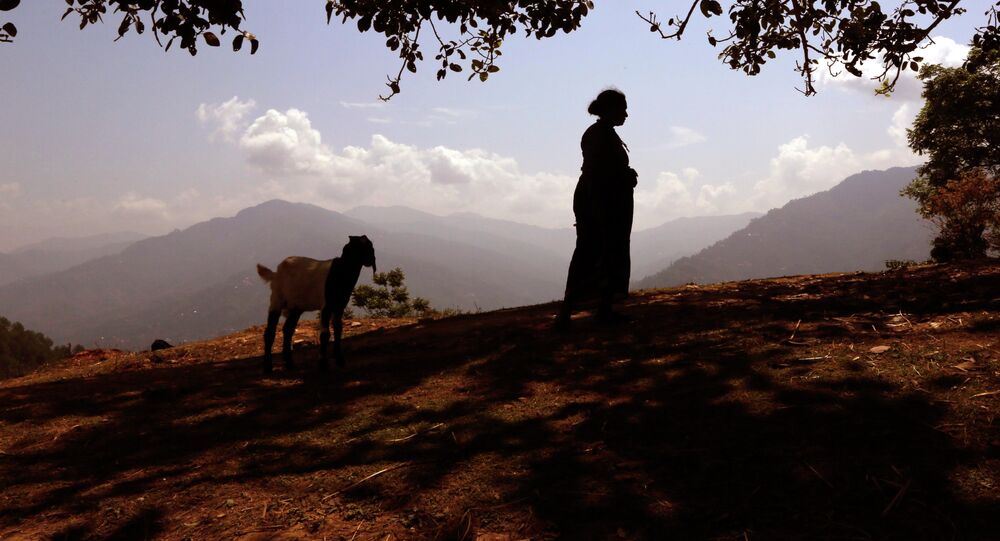 A Nepalese woman has died of smoke inhalation after being isolated in a small, windowless menstruation hut, in the country’s western Doti district. A few weeks ago, another woman and her two sons were found dead in a cowshed in the nearby Bajura district. Sputnik spoke about it to Sophie Cousins, an Australian health journalist based in Kathmandu.

Sputnik: Could you please explain why menstruating women are cast away from society and banished in huts for the whole time of their periods?

© AP Photo / Simon Dawson
Twitter Toxic as UK Women’s March Reduces Thatcher and Other Female MPs to 'Menstruators'
Sophie Cousins: This practice is called chhaupadi, which is a Hindu practice, and it's been in place for hundreds of years in Nepal. It doesn't only happen in Nepal, but it also happens in parts of India and Bangladesh. It's rooted in the belief that menstrual blood is impure. And what happens in some parts of Nepal, predominantly in the Far West region, is that, when a woman is menstruating, she's put into a hut, a very, very small, windowless hut for the duration of her period. And along with that comes a host of other restrictions: for example, the women are not allowed to enter their homes for the duration of their periods, they are also banned from entering the kitchen, touching food, touching religious icons, cattle, and men.

There are also strict rules around water, which is considered pure in Hinduism. So for example, in a village, women who are menstruating are not allowed to use community water-sources, and they're not allowed to bathe or wash clothes from any communal water-sources throughout the duration of their period. And this practice is not only just done while women are menstruating: it is often practiced when women have just given birth — so when women are bleeding, you know, once they have had their babies, they're also put into these huts, which has inevitably led to deaths of women and their babies, as well.

© AFP 2020 / STR
Twitter Sees Red as Pakistan Bans Film on Menstrual Hygiene
Sputnik: These women are segregated in these very small huts, so many have died also of lack of oxygen — especially when they lit fires inside the hut, right?


Sophie Cousins: Exactly. In the winter months, which is now in Nepal, in the Himalayas, in sub-degree temperatures, all they have are straw mats — that's all they're allowed to have — the huts are windowless, and so the only way they can get warm and protect themselves from these freezing temperatures is to light fires inside these huts. And so a number of the women have died from smoke inhalation. Because, like you said, a lack of oxygen.

Sputnik: The Nepalese government has banned the practice of chhaupadi in 2005 — that's 14 years ago. That's a long time. And yet, these women are still forced to isolate themselves during their menstruation periods. So why is this happening? Is it because it's so rooted in their culture, so they cannot really detached from it anymore? Or is it because it's a patriarchal society, so they still want this to be implemented?

© AP Photo / Christopher Brown
Another Cultural Myth That Must Go: Menstruating Women Told Not to Cross River
Sophie Cousins: I think you touched on some of the primary reasons why it's still going on. This is a belief. It's a widespread belief that menstrual blood is impure, and so while the Supreme Court banned Chhaupadi in 2005, and then the government has since criminalised the practice, not only is there this belief around it — which is incredibly hard to change —, but also a lack of knowledge of the ban.

These are in the Far West: when you think about Nepal, these are not regions that you can fly to or that are easily accessible, many of these people are so isolated that, how would people actually be aware of the ban? So it's one thing to have a ban and criminalise a practice in Kathmandu, but it's another to realise it in these far western regions which are so far from Kathmandu, and are so isolated. And, like you said, as well, it's an extremely patriarchal society. Women do not have agency, they are doing what they're told to do, but they're also doing what they believe to be right. So it's going to be really hard to change the practice.