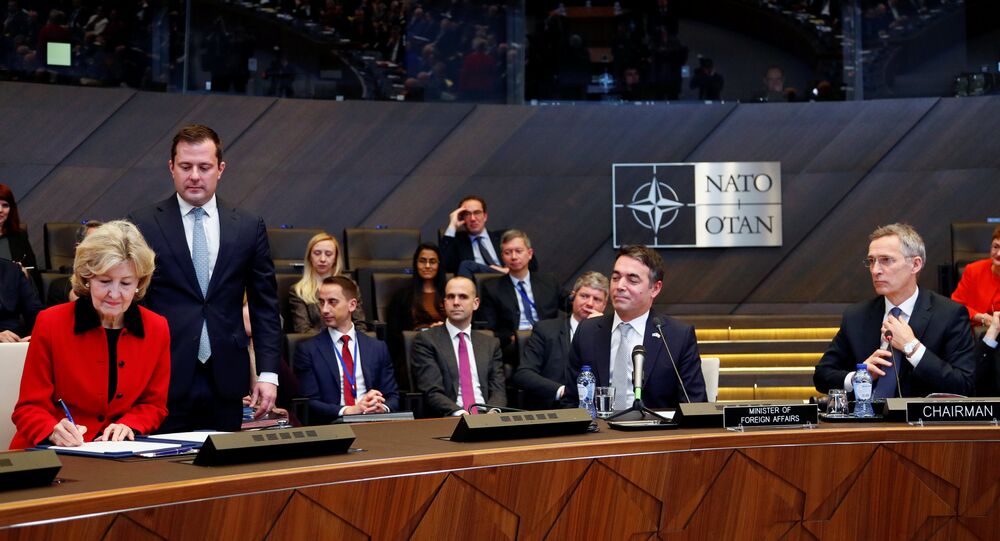 Earlier on Wednesday, all 29 NATO member-states and Macedonia signed an accession protocol in Brussels, which, nevertheless, has to be ratified.

Sputnik has spoken about the issue with author Nikola Mirkovich.

Sputnik: Secretary-General of NATO Jens Stoltenberg has expressed joy at North Macedonia's accession to the organisation, and called the 6 February 2019 a "historic day". But is it indeed a big day for the Balkan country?

Nikola Mirkovich: No, I would say it's actually a sad day for Macedonia; it's a sad day for democracy. It's only a great day for NATO and the American foreign relationship organisation that they've set up, because they're the only ones who are winning in this deal. Definitely the people from Macedonia are not going to gain anything; it's a suppression of their democracy and their rights, and they're going to become some sort of protectorate of the United States in Europe.

Sputnik: The 29 NATO members are set to ratify North Macedonia's accession protocol. Greece is the first country that will have to do so. Given the tense past the country had with Skopje over the Slavic nation's name, are there any chances that Athens will oppose resistance to the process now underway?

© Sputnik / Kostis Ntantamis
Macedonia Name Change Deal: ‘First Step Towards Reaching Broader Reconciliation’ – Prof
Nikola Mirkovich: No, I think that the name dispute is still quite strong in Greece, but today [Greek Prime Minister] Alexis Tsipras has all the powers necessary to ratify the protocol without any problems. So there will probably be some disputes in the parliament, there will be maybe some demonstrations, but it's too late. Tsipras has already got all that he needs to sign this protocol. The Greeks will probably show their discontent, but the protocol will be signed. And if the information we've got so far is correct, Greece will be the first EU country, the first NATO country to ratify this protocol this week.

Sputnik: Some commentators believe that North Macedonia's NATO membership highlights a wider issue: namely, its accession to the alliance could be seen as the latest demonstration of NATO's expansionism, and potentially — as some have argued — the institution's imperialist ambitions. What do you think about this view?

Nikola Mirkovich: Why should Macedonia enter NATO? What are the advantages of NATO? Why should Macedonians request help from NATO? That's the fundamental question. NATO was created in 1949, because Western Europe thought there was a threat coming from the Soviet Union. The Soviet Union doesn't exist anymore. So what is the threat NATO is supposed to protect NATO-countries from? Why is it so important that Macedonia enters this organisation?

I think that, today, in the Former Yugoslav Republic of Macedonia, there are bigger problems, so why are we rushing to change the name of the country and enter NATO? We are doing this only because, as you've said, this is indeed the American imperialist agenda of controlling Western Europe; and this has been a goal since the end of World War Two. Don't forget that the idea of the European Union was pushed and supported by American lobbyists, and now the idea is that, within the European Union, you must be part of NATO. And the only reason is to extend the borders of the American Empire. And that's sad.

Sputnik: So does it really come down to a matter of control and influence that NATO wants to exercise on Europe?

© REUTERS / Alkis Konstantinidis
Minor Clashes Erupted in Athens During Rally Against Macedonian Naming Deal – Reports
Nikola Mirkovich: It's extremely important that we have peace between nations, and we all agree on that. But how can you build peace when you are — excuse me — shoving a treaty, or a protocol down the throats of people, when people organised a referendum, they boycotted it and said they didn't want to participate in it, because they don't want to enter NATO and they don't want to enter the European Union?