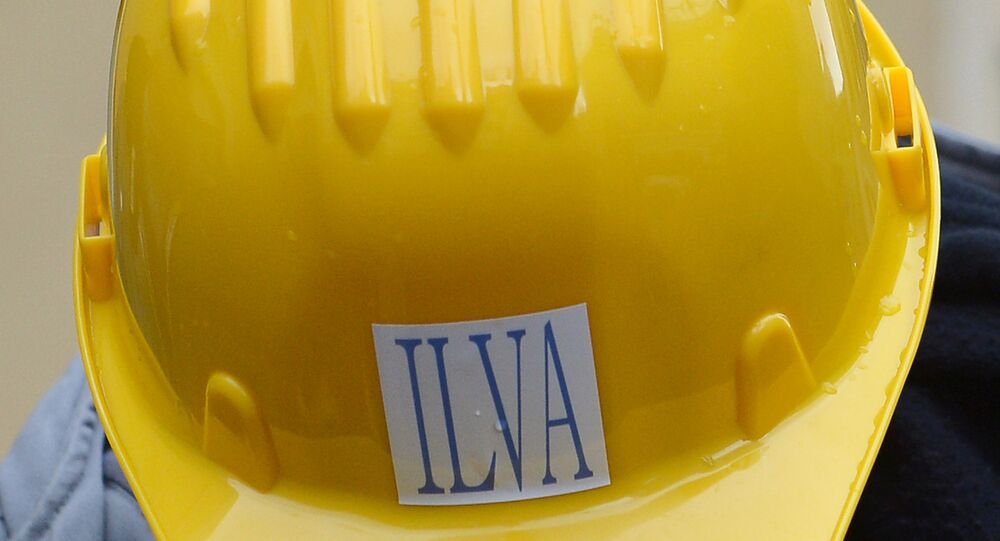 Work and Die: The Story of an Italian Steel Mill

The European Court of Human Rights recently condemned Italy for not protecting the inhabitants of Taranto from pollutants released from the Ilva steelworks.

Locals launched a petition to start criminal proceedings against the plant's owners — ArcelorMittal, the world's largest metal mining company, which has production assets in 18 countries on four continents, and does business in 160 countries.

Last weekend, thousands of Taranto citizens signed a petition against ArcelorMittal, titled "With poison in the blood and heart in hand" (Con il veleno nel sangue e il cuore in mano"). Sputnik spoke to Luciano Manna, a promoter of the campaign.

Luciano Manna: It's an initiative totally organised by citizens who up until now have had to deal with certain laws issued by various successive governments: Letta, Monti and finally Renzi. These laws have completely blown up all the rules that large corporations have to follow. To be clear, a company must comply with European legislation on Integrated Pollution Prevention and Control. However, the decrees issued by the successive governments have delayed ArcelorMittal's transition to eco-friendly production, that it should complete by 2023. The Renzi government issued a decree granting the corporation legal immunity, meaning that the company is fully immune to criminal prosecution. We therefore find ourselves with Ilva steelworks, which releases harmful emissions, a violation of the Penal Code.

Sputnik: What is the aim of your petition?

© AP Photo / Jeff Roberson, File
Steel Imports From China, Italy Hurt US Economy - US Trade Commission
Luciano Manna: We want to transfer the petition with all the collected signatures to the Public Prosecutor's Office for them to initiate a criminal case against to ArcelorMittal. We have already collected 2,000 signatures today and we expect a criminal procedure to be initiated against ArcelorMittal despite their criminal immunity. Let me recall that not long ago, the European Court of Human Rights fully supported us in this regard. The court stated that Italy produced laws that neglect environmental regulations, thus threatening public health. The current government can either appeal the court's ruling or implement the court's decision. One of the things requested by the European Court of Human Rights is that Italy should modify the laws currently in force by eliminating the penal immunity granted to ArcelorMittal. It's absurd that today, those who commit environmental crimes bear no responsibility for this.

Sputnik: Currently, what are the effects of Ilva's industrial activities?

Luciano Manna: The emissions have caused a number of problems. For instance, our children cannot go to school on days when the wind blows from the north or north-west. Our mayor has ordered schools to shut down in such situations. Things become very bad when heavy wind brings toxic waste to residential areas. People are forced to sweep toxic waste off their lawns, balconies and roofs.

A lady from Tamburi told me that in her family of eight people, six had died of cancer. This seems like extermination. The houses in the Tamburi district have depreciated (in value) — there are even houses for sale for just 20,000 euros. Some people who had the opportunity to turn to a lawyer have already filed lawsuits and have been compensated for the depreciation in the value of their homes.

Sputnik: How do you think this problem should be solved? Do you think Ilva will be closed or it will be modernised? We know that the company provides employment to many locals.

Luciano Manna: Taking into account the existing experience, I believe we should look at the way other European governments have solved this kind of problem. What they did is they transitioned to eco-friendly production facilities, but these projects were born in 1999 and in the early 2000s and they took 10-15 years to implement. At the same time, they retrained their employees so that they could work at such plants.