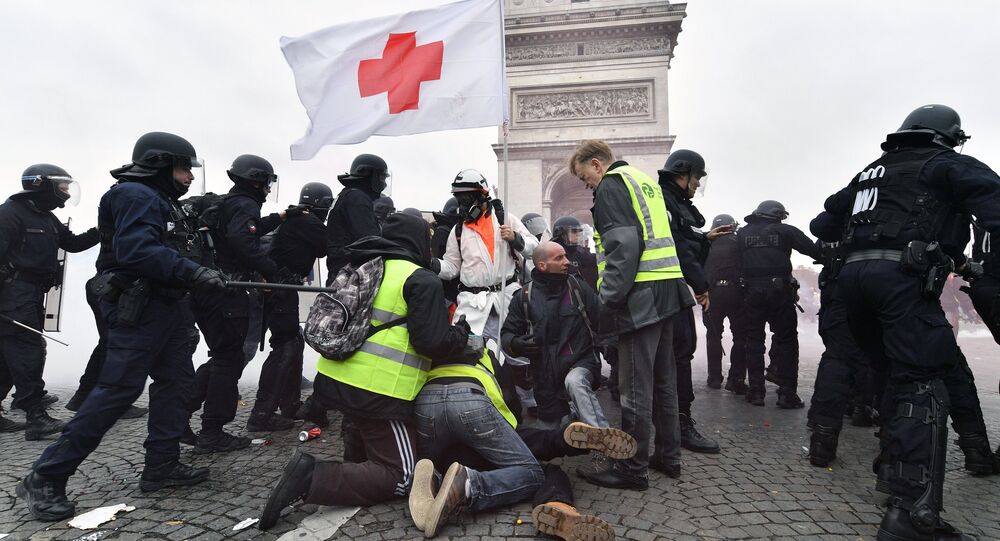 Yellow Vests protesters have turned into a "new political factor" in French domestic affairs, Karel Vereycken, vice-president of the Solidarity and Progrès Party, told Sputnik, commenting on the movement's bid to take part in the upcoming EU parliamentary elections.

"What the Yellow Vests have gained after 12 weeks of protest is less tangible but much 'bigger' than the scrapping the planned increase of taxes on fuel and some pocket money," Karel Vereycken, a French journalist and vice-president of Solidarity and Progrès Party, headed by Jacques Cheminade, said.

"The Yellow Vests fight for recognition and dignity through better living standards, new forms of democracy, better infrastructure for all, a powerful national bank in charge of public credit, and more" the politician told Sputnik. "Much more than income, it means the right to be able to live correctly from their salary and to transmit something to the next generations. For them, if Macron refuses to change the current paradigm of self-destruction, he should quit".

The Yellow Vests movement was launched on 17 November 2018. Initially the French protested against fuel tax hikes, but soon shifted their focus onto President Emmanuel Macron, urging him to step down. The protests have not waned so far, seemingly spiralling out of control.

"Sociologically, we're facing the same categories as those that triggered the vote for the Brexit in the UK, for Trump in the US and for the Italian coalition partners: not the poor or the unemployed, but the hardworking lower middle class whose income, life, pension, public services, health-care systems have been grinded, by globalisation and complicit, lying and stealing corrupt elites," Vereycken explained.

© AP Photo / Michel Euler
Macron's 'Pseudo National Debate' Won't Diffuse Yellow Vests Crisis – Journo
According to the politician, what we are witnessing now is a "worldwide tectonic wave of the 'forgotten men' starting as early as 2005 when 54 percent of Frenchmen rejected, in a popular referendum, the EU Constitution but were forced to swallow it anyway".

He noted that there were many occasions when the French elite turned a deaf ear to the people's pleas on labour laws, deregulation and the privatisation of infrastructure.

Meanwhile, Thierry Paul Valette, the Yellow Vest's Paris coordinator, announced on 1 February that the movement is going to take part in the upcoming European parliamentary elections.

When asked whether they have a chance of becoming a new popular political force, Vereycken responded that they "are already a new 'political' factor of French political life, though without elected political representatives".

© REUTERS / Pascal Rossignol
Yellow Vests Have Nothing to Do With the Rise of Right in Europe – Author
"What they bring up is so 'heavy' and their determination is so great, that, despite arrests, flash balls and police violence, their fight will take other forms but will rather grow than decrease," he underscored.

According to Vereycken, "Macron's wet dream is to have some lists of Yellow Vests for the Euro elections in order to take away votes from Le Pen, Melenchon and the anyway unpopular Laurent Wauquiez".

"The popular saying goes that in a two way race versus Le Pen, a green plant would win the election. Macron desperately wants to be that green plant again," he said. "Marx, quoting Hegel, said that history repeats itself, the first time as tragedy, the second time as farce. That goes for Macron".

© AP Photo / Ludovic Marin
French President Emmanuel Macron delivers a speech during a ceremony at the Arc de Triomphe in Paris as part of the commemorations marking the 100th anniversary of the 11 November 1918 armistice, ending World War I, Sunday, Nov. 11, 2018

Macron: A 'Hybrid of Thatcher, Blair and Cameron'

© AP Photo / Eric Vidal
Yellow Vests: No Coincidence Macron, Merkel and May are in Dire Straits – Journo
While Macron refuses to invite Yellow Vests to the Elysee for talks, he opens the door wide open to "officials and clients of BlackRock, the top financial wealth managers, far more powerful today than the bankers, at the Salon Murat at the Elysee and at Versailles," the journalist remarked.

Therefore, it's hardly surprising that "to reduce taxes and pay the un-payable debt, Macron has only one recipe: reduce spending rather than create new jobs through productive investment allowing a growing tax base", the journalist elaborated, adding that "to this Malthusian liberalism, Macron adds arrogance and lack of empathy".

"Macron, it should be remembered got only 8.6 million votes (24 per cent) in the first round of the 2017 presidential election," Vereycken recalled. "Instead of reaching out with intelligence and empathy to those who didn't vote for him, or voted for him only to reject the other contender (Le Pen), Macron started ramming through his 'reforms' without consulting anybody pretending he got a mandate from heaven and the legitimacy of the entire country".

Casting their ballots for Macron in 2017, the French people voted "against the corruption of the big party system", but they now discover it's only worse, the politician emphasised.

Hidden Flaws of the Aachen Treaty

In the backdrop of Yellow Vests protests, President Emmanuel Macron and German Chancellor signed the Aachen Treaty to deepen cooperation and integration between the two countries on 22 January.

Speaking to Sputnik, Vereycken expressed scepticism about the agreement: "The treaty, while not immediately causing damage, is potentially very destructive because setting a framework of Anglo-American juridical references reducing the sovereign powers of the nation-states at a moment they need to be redefined and reinvented for the coming world but consolidated against the financial powers out to destroy them," he said.

"In France, the treaty was an issue in the social networks and branded as 'yet another' proof the elites were selling out the country. Compared to the massive return of the 'la question sociale', i.e. the buying power and living standards of the working, the Aachen treaty remains a secondary issue," the politician concluded.

The views and opinions expressed by the contributor and the speaker(s) do not necessarily reflect those of Sputnik.