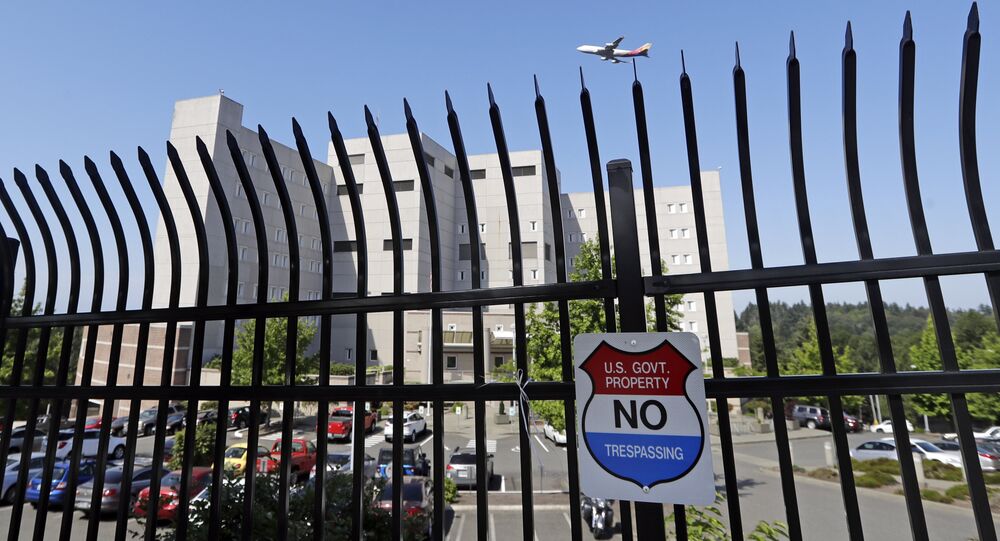 On Thursday, the US Department of Homeland Security (DHS) confirmed it has been force-feeding six detainees staging a hunger strike. The practice is borderline torturous.

The conditions the detainees are protesting are arduous, too. An immigrant rights activist told Sputnik Friday that a system that allows this "doesn't have much room for justice."

Immigration and Customs Enforcement (ICE), an agency of DHS, confirmed Friday it had begun the invasive practice of force-feeding six striking detainees by forcing a plastic hose up their nose and down their throats to force them to eat.

While ICE maintains it's doing this for their own good, the practice is extremely dangerous and ethically questionable. Numerous medical associations have denounced the behavior as "never ethically acceptable" and called it "torture" and "cruel, inhuman and degrading treatment." The World Medical Association Declaration of Tokyo maintains that prisoners who are capable of "rational judgment concerning the consequences of such a voluntary refusal of nourishment… shall not be fed artificially."

Nonprofit advocacy group Freedom for Immigrants has documented 1,396 people on hunger strike in 18 immigration detention facilities since May 2015, and despite differing definitions on what constitutes a hunger strike, AP concluded that there are 30 ICE detainees on hunger strike at present. They are protesting their treatment by ICE officials, including having been detained in prison-like facilities for long periods of time and being subjected to what they describe as rampant verbal abuse and threats, including of deportation, by guards, Sputnik reported.

"We've been decrying this for years, that the conditions in these gulags, in these Guantanamos, across the nation have been deteriorating," Juan Carlos Ruiz, cofounder of the New Sanctuary Movement, told Radio Sputnik's Loud and Clear Friday. "This clearly evidences a system that… threatens any kind of human life, the basic human rights of people who are being detained."

© REUTERS / Adrees Latif
Pentagon Declines Trump Administration's Draft Request to Build Detention Facilities at Mexican Border - Reports
​"We have to remember, the conditions exist, given that there is not much monitoring, given that all these detention centers — most of them, the majority of them — are in private hands. That is, private companies with little-to-naught monitoring are housing — housing, I don't think is the adequate word — they have in these places of torture, these individuals."

"So what we are seeing, the decrying of these conditions, is not new. It really emphasizes a system that has really turned against our communities, turned against people of color, across the nation. So we appeal to all people with good conscience and good faith to raise their voices, to decry such injustice, and — really, I think when we talk about the privatization of jails, of detention centers, this is clear evidence that this is well-entrenched in our justice system, which doesn't have much room for justice, and we do need to do something about it."

Noting that 75 percent of immigrant detention facilities are in the hands of private companies, Ruiz told hosts John Kiriakou and Brian Becker that "they are making a kill. They are making a lot of money, and a lot of the work they do, this infrastructure is that of terror and torture. The conditions that they are providing for the people that keep being incarcerated in this legal limbo — I mean, it's just for the sake of profit."

Ruiz noted that private immigration detention centers get paid 40 percent more per inmate by the federal government to house them than do privatized prisons for US citizens: "We talk about an increase to between $90 and $150 per day, so you know, this a booming business, given that the political climate has been created that fosters and festers the imprisonment and putting away of thousands upon thousands of people."

"We also have to remember that, methodically and systematically, people are being cut off from any kind of community resources, legal resources, so that they are being held in these places indefinitely. When I do say Guantanamo, it's not a rhetoric figure, but is something they can place in our backyard."

Ruiz noted that the US government has at least 15,000 children in custody, although he said he suspects there may be more, but that journalists are being censored when talking about it.

"These are the so-called ‘unaccompanied minors' that, in the last few years — I mean, there are some children who have been locked away for two, three years, you know, without any kind of solution in the near future. So we are talking about kids who have been forced — displaced — from their hometowns and coming to this side, and most of them have family, most of them have friends waiting for them. But you know, there is a kind of violence cycle that, as people begin to claim [the kids], they have to identify themselves and, given the political climate nowadays, a lot of them fear once they identify themselves to claim these kids, they are going to be targeted by the administration, by ICE."

"There is a humanitarian crisis that we have in our hands, that we have been creating," Ruiz said, adding that "this is an erosion of the democratic values, the value of justice, on all fronts."