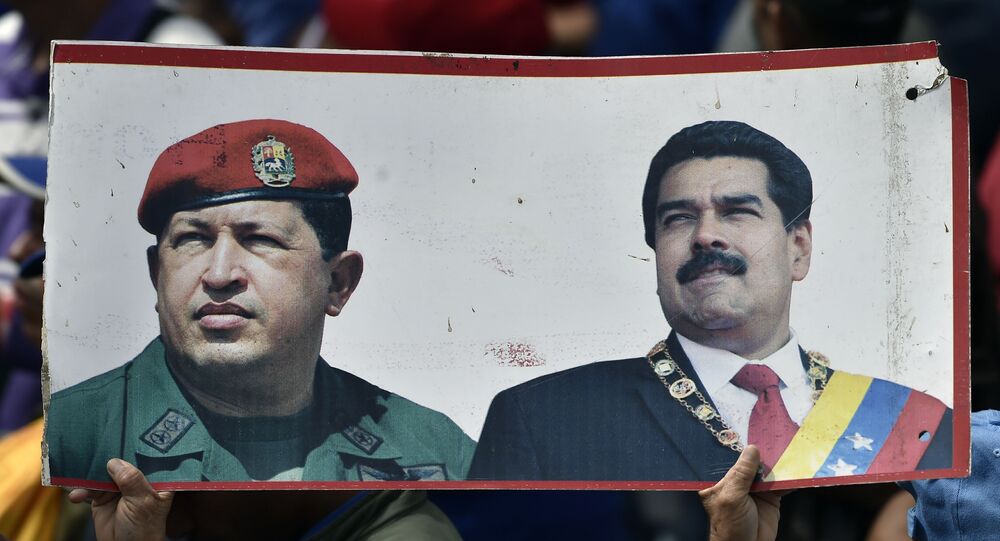 Venezuela has been mired in yet another crisis as US-backed opposition candidate Juan Guaidó openly declared himself acting president on 23 January amid an ongoing political coup against current Venezuelan president Nicholas Maduro's government, with the Venezuelan Supreme Court freezing Guaidó's accounts and barring him from leaving the country.

Sputnik spoke to James Tweedie, former international editor for The Morning Star and founding member and former executive committee member of the Venezuela Solidarity Campaign, to get an insider's look into Venezuela as well as history behind the current political crisis.

Sputnik: Who is Juan Guaido, and what is his relationship to US intelligence services? Who is backing the coup and what's going on there?

James Tweedie: Like many wealthy Latin Americans, Juan Guaidó completed two postgraduate programmes at George Washington University in the US in "governance", which involves telling people how to run their country.

Guaidó appeared on the political scene in Venezuela shortly after 2007 and years before that, the opposition had been taking money from the National Endowment for Democracy, which sounds like a charity but is really part of the US State Department. The NED took over the CIA's job of channelling money into opposition and regime-change forces in other countries.

© AP Photo / Ariana Cubillos
Ex-Head of Venezuela's PDVSA Energy Firm Says Ready to Run for Presidency
Guaidó is a founding member of the Popular Will party, part of the large opposition Democratic Unity Round-table (Mesa de la Unidad Democrática, or MUD) coalition holding 14 seats in the National Assembly, or Venezuelan parliament, making it only the third biggest party in the MUD. Its leader Leopoldo López has been jailed since 2015 for inciting violent insurrection in the 2014 Guarimba riots, which killed 43 people including an MP for the ruling United Socialist Party of Venezuela (PSUV), as well as his girlfriend, who were murdered in their flats.

In the second coup d'etat (Guarimba) in 2017, a few Popular Will members were arrested with guns and explosives, as well as lists of targets in their possession. One of them was Yon Goicoechea, who was given the Milton Freedman prize in the US for "advancing liberty" in 2008.

Guaidó was later elected as National Assembly speaker on 5 January, replacing another MUD party member as part of a shift in the coalition's position back towards violent regime change, after a short period of negotiating with the ruling government and taking part in elections from 2017 to 2018.

It is important to note that Guaidó was not even the MUD candidate in last May's presidential elections. That was Henri Falcón from the Progressive Advance party, and Guaidó reportedly spoke to US Vice-President Mike Pence the day before he declared himself president.

Sputnik: What is life in Venezuela on the ground like? How have sanctions affected daily life? What can you tell us about the Venezuelan people and their admiration for former Venezuelan president Hugo Chavez and current President Nicholas Maduro?

James Tweedie: I last visited Venezuela in September 2017, not long after the second Guarimba, where riots had fizzled out after four months. About 125 people were killed and rioters had blocked the roads and burnt food warehouses to worsen access to supplies. But when I got there, I found the supermarkets, cafés and restaurants and pharmacies open, and even brought back two bottles of Venezuelan rum that I got in a local off-license. There was no shortage of that!

People did tell me that hyperinflation made their wages and savings worthless and caused a severe shortage of banknotes despite the government issuing new ones. Black market money-changers bought them up for US dollars and disappeared, but pallets full of them have been found in warehouses in Colombia and Brazil, even in Europe. One explanation is that they are being bleached and used to print counterfeit notes.

© Sputnik / Alexey Vitvitsky
EU to Set Up Intl Contact Group on Venezuela Crisis - Mogherini
The MUD only won the National Assembly election in 2015 by a landslide as votes for the United Socialist Party of Venezuela fell roughly 2 million, with MUD votes rising a few thousand. But since then, the PSUV has managed to re-mobilise its base and win elections again.

Since Chávez's death six years ago, he has gained an aura of 'sainthood' around him, with his image posted on murals everywhere. Outside Venezuela, you see people who were in love with Chávez, the peasant warrior poet, now turning against Maduro, the tough working-class bus driver.

Sputnik: Following the nationwide 23 January 'protests', where do you see the conflict between the US-backed National Assembly and Maduro government? What's the ratio of support to opposition for Maduro?

James Tweedie: My contacts in Venezuela say the opposition demo in Caracas on January 30 was a total flop — much smaller than pro-government rallies. Last week, Guaidó was begging the armed forces to overthrow the government and install him as president. That's his only hope, short of the US invading the country.

Sputnik: What do you know about the UK government refusing to repatriate Venezuelan gold? Why have they refused to do so? Has this happened to other countries?

James Tweedie: The UK government's decision to confiscate $1.2 billion (£918.4m) in Venezuelan bullion held by the Bank of England is an undeclared act of war, as are all sanctions, but not the first time this has happened. Since the 2011 NATO war on Libya, tens of billions in Libyan state oil revenue has been held in a Maltese account, waiting for one of several warring factions the West decides to back to claim it.

Sputnik: Could Maduro do anything to end the history of violent US-backed coups? Is there a long-term solution to the conflict?

James Tweedie: Firstly, giving in to Western demands to rerun last year's presidential election will not end the sanctions unless the opposition wins, when they lost by a landslide last May. Venezuela is the land of elections and has conducted them at least one a year since Hugo Chávez took office in 1999, but the opposition and their Western allies only recognise results when they win.

The Western liberal idea of democracy is that "everything must change so everything can stay the same", or in other words, no party should stay in power long enough to change anything. Their measure of 'democracy' in former colonies is when national liberation movements lose and all developmental gains are reversed.

In his exclusive interview on Sputnik this week, President Maduro said the latest Russian arms were on their way to Venezuela. That, in addition to a loyal armed forces and citizens militia, are the best guarantees against a coup or an invasion. The most encouraging sign is that the Lima Group, the 11 Latin American countries plus Canada (who trying to force Maduro to go), said it publicly opposed any US military interventions this week, in addition to the Spanish foreign minister on Thursday.

© REUTERS / Adriana Loureiro
Venezuelan President Maduro to Sputnik: Trump Ordered Colombian Mafia to Kill Me (EXCLUSIVE)
US officials advocating this coup, such as Mike Pence, Mike Pompeo, John Bolton and Marco Rubio, are the sort to argue for an invasion, like Iraq or Afghanistan, if the Venezuelan army does not join the coup, but Donald Trump is trying to pull troops out of Syria and Afghanistan. Does he really want to send them to invade another country that could resist for years? Maduro also accused Colombia yesterday of hosting a Bay of Pigs-style invasion using pro-opposition army deserters, but everyone knows how the Bay of Pigs ended.

It is ironic that, at least until the latest sanctions this week are implemented, US oil companies such as CITGO operate in Venezuela and the US imports Venezuelan oil, so Washington may not aim to "grab the oil" but rather prevent Venezuela from divesting its economy away from oil, which it has not done to date. Latin America is largely a captive market for US goods, and Washington presumably wants to keep it that way.