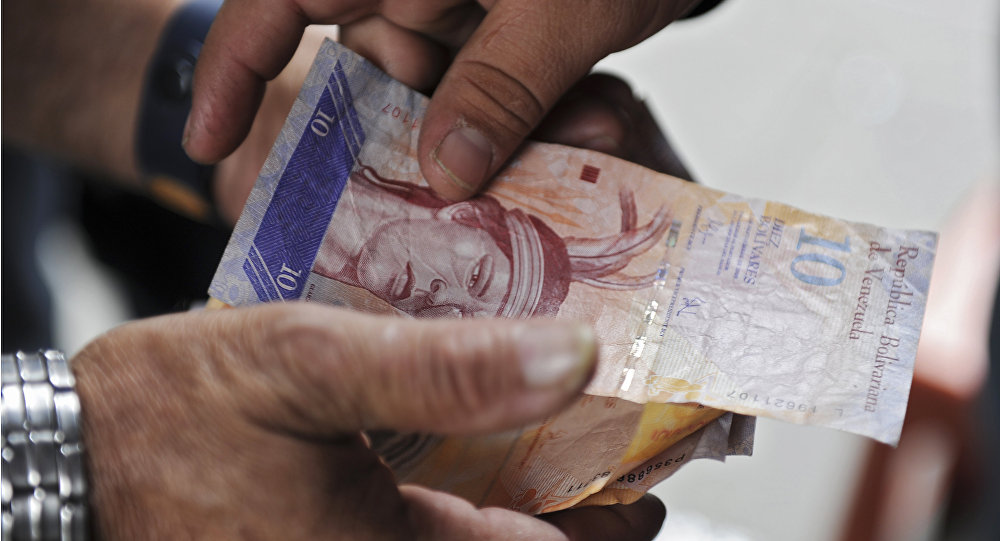 MOSCOW (Sputnik) - The current international tensions around Venezuela threaten to only deepen the internal crisis, by ramping up fears of investing in the beleaguered Latin American nation and discouraging opposition from meeting the government halfway in seeking joint solutions, experts told Sputnik.

Venezuela has long been suffering from political and economic crisis triggered by the recent fall of global oil prices. On January 23, the crisis took a new turn when the speaker of the opposition-led Venezuelan National Assembly, Juan Guaido, declared himself interim president amid ongoing anti-government protests.

© AP Photo / Fernando Llano
Venezuela Crisis: US May Have Been Behind This For a Long Time - Prof
The United States swiftly recognised Guaido and unveiled new sanctions against Caracas. In particular, it blocked $7 billion in Venezuelan state oil company PDVSA's assets in its jurisdiction and imposed a ban on deals with the entity as part of efforts to facilitate power transfer. US Treasury Secretary Steven Mnuchin explained that the United States thereby takes care of the company in the interests of the people of Venezuela.

The United Kingdom, among other allies, followed the US lead in endorsing the opposition leader. Last week, the Bloomberg news agency reported, citing informed sources, that the Bank of England had heeded the US call for cutting off President Nicholas Maduro government’s access to foreign assets and rejected its request to withdraw $1.2 billion worth of gold.

Later, reports emerged that Guaido did send letters to UK Prime Minister Theresa May and Governor of the Bank of England Mark Carney, urging them to block the Venezuelan government’s access to gold reserves held in London. The Bank of England refused to comment on its activities.

At First Peace, Then Foreign Investment

Dr. Steve Ellner, a professor at Universidad de Oriente in Venezuela’s Puerto La Cruz and author of numerous books on Venezuelan politics, recalled that the current US administration had long been pressuring the Latin American economy with sanctions scaring off investors from engaging in any transactions with blacklisted entities and individuals for fear that their money will get frozen.

According to the professor, these fears will only strengthen under the new circumstances.

"The U.S. Treasury Department has made clear that they are closely monitoring all money movement to guard against transactions involving one of the 70 or so Venezuelans who are on the list of those sanctioned by Washington. The international tensions around Venezuela can only increase the fear on the part of business people throughout the world of trading with, or investing in, Venezuela", Dr. Ellner said.

The inflow of foreign investment, however, is also impossible without a "minimum agreement" between the government and the opposition in Venezuela, Christophe Ventura, a senior research fellow at the French Institute for International and Strategic Affairs specializing on Latin America, noted.

"Economic crisis in Venezuela cannot get better only with the support of Russia and China. For the economic situation to get better we need several things. We need a minimal agreement between the Venezuelans themselves, between the government and the opposition to enable economic recovery, because today’s political situation makes the international investment impossible", Ventura told Sputnik.

© Sputnik / Sergei Guneev
Britain Calls for EU Sanctions on Venezuelan President Maduro - Reports
According to the expert, there needs to be an agreement to "protect economic activities and progressively relaunch it," with the country also needing its private sector to "stop being at war with the government" and contribute to the economic build-up.

Dr. Ellner agreed, noting that the Venezuelan authorities would inevitably have to make unpopular decisions to tackle the crisis, which would be an impossible task to implement without at least minimum understanding from the opposition.

"The way out of the economic crisis is the implementation of measures that will have a political price, for instance, the increase of gasoline prices. Unless there are greater political stability and some sort of understanding between the Maduro government and the opposition, at least with the moderates in the opposition, Maduro will be unwilling or unable to implement these harsh but necessary measures", he said.

The internal reconciliation, in turn, should be followed by swift removal of sanctions against Venezuela, Ventura said.

According to the expert, the West is demonstrating great hypocrisy, by crying wolf about the economic crisis in the country — which was triggered by both decline in oil prices and US sanctions — and, at the same time, "strangling" its economy with more sanctions.

"Putting financial embargo on Venezuela which is strangling it, cutting all the possibilities for Venezuela to have access to international finance, and moreover have no access to its own assets around the world, all this serves to ruin Venezuela’s economy – clearly, for political reasons, because, on one hand, the Americans, the Europeans say this economic crisis is intolerable, but, on the other hand, they worsen it to weaken Nicolas Maduro", he argued.

The logic behind such actions is "a classic strategy of the regime change," with economy used as a weapon, Ventura went on.

"At some point, indirectly the US sanctions [against Venezuela] are indirect sanctions against [Caracas’ major economic partners] Russia and China. And Venezuela is not in a position to reimburse anything to anyone," he added.

Commenting on the speculation around the Bank of England’s possible freeze of the Venezuelan government’s gold reserves, Guadalupe Correa-Cabrera, an associate professor at Virginia’s George Mason University, said that such steps would be unlawful and tantamount to support of a coup.

"There is no legal basis for an operation like this. The countries of the West who support the restriction of Venezuela’s gold reserves to the President of the country — based on a unilateral decision by some actors of the opposition and no democratic process — are supporting and even performing defacto a coup d’etat," Correa-Cabrera told Sputnik.

© Sputnik /
USAID Administrator, Guaido Agree to Work to 'Restore Democracy' in Venezuela
According to Correa-Cabrera, under such circumstances, international developments around Venezuela will much depend on the stances of Russia and China, as main stakeholders with great economic interests in the country, who have voiced support for the Maduro government.

Phillip Gunson, the Andes Project Senior Analyst for the International Crisis Group, meanwhile, recalled that the Maduro government was "already having difficulties with access to the gold in the Bank of England, even before Washington recognised Guaido as the legitimate president."

"The president of the Venezuelan Central Bank, Calixto Ortega, is among officials sanctioned by Washington. It seems extremely unlikely that the Maduro government will be able to recover the gold under present circumstances", he opined.

Gunson suggested that the government’s assets held in other countries that recognized Guaido would likely suffer the same fate and "will gradually pass into the hands of the 'interim government,'" while putting additional strain on the crisis-stricken economy.

"The economy is in a terrible state, with hyper-inflation calculated in the millions of percent projected for 2019. With less than nine billion dollars in foreign reserves, much of it in gold, the government will sorely miss the gold in the Bank of England, which is reportedly worth around USD1.2 billion", he concluded.

Commenting on the economic pressure on the country, Maduro said in an interview to Sputnik this week that the United States had thrown its weight behind Guaido in the hope of getting its hands on the country’s oil reserves, recognized as the world’s largest.