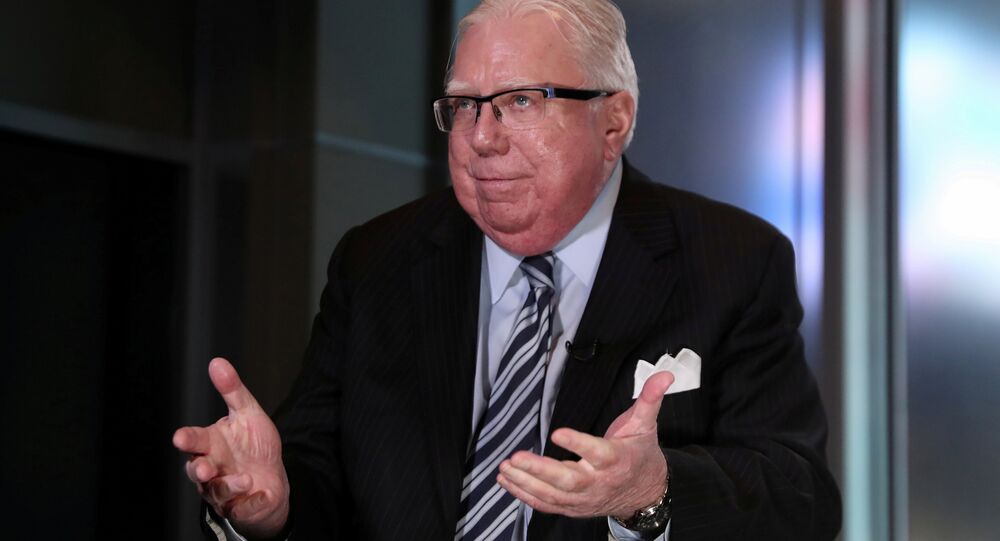 When Roger Stone was indicted in a US district court last Thursday, the filing named a “Person 1” whom Stone allegedly enlisted to help him plan a document leak’s timing with WikiLeaks. That person, Jerome Corsi, spoke with Sputnik Wednesday about what he told special counsel prosecutors about Stone last summer.

Corsi, who edits the news site WorldNetDaily, was first subpoenaed by special counsel Robert Mueller's office in September 2018, giving 40 hours of testimony to Mueller's team. He told CNN's Jake Tapper over the weekend that he would be "happy to testify" against Stone to Mueller in US district court.

His book about the experience, titled "Silent No More: How I Became a Political Prisoner of Mueller's ‘Witch Hunt,'" was released in November. However, the writer is perhaps better known as a conspiracy theorist, whom the Washington Post described as having "peddled hateful falsehoods, doubting the veracity of official accounts of the attacks of Sept. 11, 2001, and denying that President Barack Obama was born in the United States."

Corsi was also subpoenaed earlier this month by the US Senate Intelligence Committee, its second attempt to obtain information from the writer as part of its investigation into alleged Russian interference in the 2016 election. Corsi and his lawyer, Larry Klayman, parried the first request and indicated to the Hill that they intend to fight this subpoena as well.

Stone was indicted on seven counts, all relating to testimony he gave to the House Intelligence Committee in 2017 about his attempts to contact WikiLeaks in the summer of 2016: one of obstructing a proceeding, one of witness tampering and five of making false statements to Congress. Stone claims he never spoke with Julian Assange or his website, WikiLeaks, directly, only through an intermediary believed to be comedian Randy Credico. He reportedly intended to divine the timing of the website's release of emails stolen from the Democratic National Committee in a hack earlier that summer, but failed to do so.

WikiLeaks began releasing the hacked emails, which numbered over 20,000, in batches between July and November 2016.

The information contained in the leaks was explosive: it revealed that senior Democratic Party leaders had conspired to block Bernie Sanders from supplanting Hillary Clinton as presumptive presidential nominee, as well as the quid pro quo nature of donations to Clinton's campaign. On October 7, only a month before election day, emails dropped belonging to John Podesta, Clinton's campaign chair, that proved she received debate questions in advance, and exposed internal discussions revealing the cynicism behind her policy positions.

Only an hour earlier on that same day, a much anticipated tape was released showing Trump, unaware he was being recorded, bragging to "Access Hollywood" correspondent Billy Bush about his ability to sexually assault women and get away with it.

Corsi told Radio Sputnik's Loud and Clear Wednesday that Stone called him that day in an effort to find a way to influence Assange to release Podesta's emails in an effort to deflect attention away from the "Access Hollywood" tape. Corsi says despite the request, he was unable to reach Assange or anyone else connected to WikiLeaks.

​Corsi told Sputnik he was previously interviewed as a witness because Mueller is "building the material case of [Stone] lying to the House Intelligence Committee," which Mueller alleges in the indictment he did in 2017.

© REUTERS / JOE SKIPPER
Stone ‘Plays Up Drama’ of Mueller Indictment, But Charges ‘Have No Relevance’ to Russiagate

"If subpoenaed, I will be a witness, and I will tell the truth, whether that's favorable or unfavorable to Roger," Corsi said.

"Everything in the indictment, I believe, against Roger is true," Corsi says. He recalls having had three calls with Stone on the day in question, according to phone records shown to him by the special counsel's prosecutor. "My recollection is that Roger asked me on that call, one of those calls, if we can get to Julian Assange. Now is the time for Julian Assange to begin making public the emails on Podesta, to essentially counter in the news cycle the release of the Billy Bush tape, which was anticipated that day. Now, that's what I recall — Roger may have a different recollection of it. I don't have a recording of that call."

"I can't prove — afterwards I think, one of the many meetings I had was a WorldNetDaily editorial meeting.. but truthfully, as we look through everybody I talked to that day, I didn't have anybody I could get to that would be able to influence Assange, and the time between the phone calls and Assange actually releasing the emails was very short," Corsi continued. "So there was nobody that I could have called that would have made any difference. I think Julian Assange did what he wanted to do for his own reasons. But what I can testify to is that I've recalled that Roger wanted to see if there was some way that we could influence Assange, and again that's my recollection that I would testify to."

Earlier this month, Stone called Corsi a "pathological liar" on Instagram and dismissed claims in Corsi's book that he sought Corsi's help in influencing Assange as "preposterous."

Corsi said he didn't think he would be indicted by Mueller, but merely used as a witness, "because I don't think I've done anything wrong."

Roger Stone Goes to Court as Mueller's Investigation Winds Down