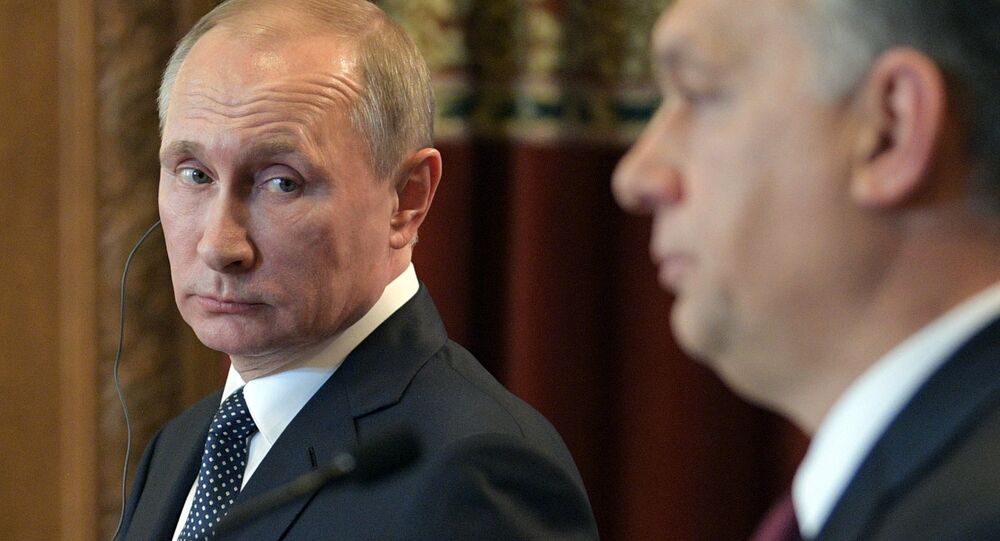 Hungarian Prime Minister Viktor Orban has reportedly told US diplomats that he wants to pursue a neutral foreign policy rather than bow to Washington's demands. He also pushed back US requests to tackle China's alleged cyber espionage and support Ukraine against Russia, stating that he wants his country to be "neutral, like Austria".

Sputnik has discussed the Hungarian PM's statements with Paolo Raffone, a strategic analyst and director of the CIPI Foundation in Brussels.

Sputnik: Why is Mr Orban defiant to the US calls on Hungary to be tougher on Russia and China?

Paolo Raffone: After World War I, when the country lost 70 percent of its territory and almost 60 percent of its population to its neighbours. The new borders led to a series of territorial and ethnic disputes that have not been fully solved. Hungary joined NATO in 1999 and the EU in 2004. More than Austria, Hungary has kept its imperial mentality that not even the USSR was able to delete. Such a mentality, to a certain extent is visible also in its former communist leaders who were defiant of Moscow, and which is now embodied by Viktor Orban and his Fidez party.

© REUTERS / Bernadett Szabo
Protesters Rally in Hungary Over Labour Law (PHOTOS, VIDEO)
Orban is a nationalist but with a broader view of its neighbourhood, his geopolitical spatial image still reflects the mentality of the empire. For such reasons, Orban dislikes the EU's centralized ruling and regulatory system — that recalls the same sufferings that Hungary felt during the USSR — while he demands to be treated as "power". While the EU is a system, a mechanism of integration, Orban prefers to deal with states that have a traditional imperial attitude, Russia and China.

After five centuries of being under the influence of bigger powers, Hungary's main geopolitical goal is to achieve as much autonomy as possible and to keep its options open, especially during times of competition between greater powers.

Hungary is an export-oriented, high-income economy, and one of the main receivers of foreign direct investment in Central Europe. Its main trade partners are in the European Union, and the country is a net receiver of EU cohesion funds. However, in recent years the Hungarian government has been critical of some aspects of EU integration and has so far decided not to join the eurozone.

© AP Photo / /RIA Novosti, Alexei Druzhinin, Presidential Press Service
Hungary Refuses to Dance to US Tune, Step Up Pressure on Russia - Reports
Hungary is also interested in keeping close ties with its Central European neighbours in the Visegrad Group, which also includes Poland, the Czech Republic, and Slovakia. While Hungary's main policy goal since the end of the Cold War has been to integrate into Western economic and security organisations, Budapest also seeks good ties with Russia, from whom it purchases most of its natural gas.

On China, Budapest has strategic interests to continue to be China's number one economic, trade and investment partner within the Central European region. China has pledged to spend about $1 trillion (€885 billion) on its so-called Belt and Road Initiative (BRI), a vast portfolio of projects aimed at transforming its links with Africa, the Middle East, and Europe along the ancient Silk Road and other trade routes — and Hungary and its neighbours are keen to cash in.

Sputnik: How well will Hungary's stubbornness sit with Washington officials?

Paolo Raffone: Over the past years, US liberals — those transversal groups promoting globalisation, mostly close to the Democrats but also present in the Republicans — have dubbed Orban as a dangerous illiberal character.

On 9 January 2019, the Brookings Institute published an essay in which the hostility towards Orban is clear: "Since Orban won reelection, however, his behaviour has called into question not only his democratic bona fides but also his basic trustworthiness as an ally of the United States and member of the democratic Western world. Increasingly, Hungary is behaving like a rogue state".

© REUTERS / Luke MacGregor
Soros-Founded University Claims Orban's Gov't Has Forced It Out of Hungary
However, the US is undergoing a very deep internal inter-elites fight, with Trump in the forefront. It is in this context that Hungary is moving its cards. To a certain extent, Orban's policies are not so dissimilar from Trump's. The EU attitude that has threatened to cut EU funds to Hungary (and Poland) on the ground of the poor respect of the rule of law, Soros's recent declared attacks on Orban's policies (that followed the Hungarian decision to kick out of the country the Soros-sponsored Open University), the Brussels hysteria that describes Hungary as a "trojan horse" for Russian intel operations in Europe and Chinese economic expansion, have deepened and strengthened Orban's conviction that his decisions are the right ones.

© REUTERS / Larry Downing
US Upset Hungary Refuses to Expel Suspected Russian Arms Dealers - State Dept.
Washington's White House is much milder on these issues. It can be recalled that during the 2018 Trump-Orban visits they exchanged reciprocal admiring statements. Moreover, the political strategist Steve Bannon announced he'd be willing to work with Orban in preparation for the forthcoming EU elections in May 2019. Bannon said next year's European elections would bring a clash between forces led by core EU members such as Germany and France, who want more integration and Eurosceptic nations like Hungary, which seek an alliance of strong member states. Considering Trump's and Pompeo's views about the EU and in particular, some of its member states, namely Germany and France, Orban's stubbornness might eventually be well received by the current US administration.

Sputnik: How high are the chances that Orban's attitude towards the US could lead to a scenario similar to the one happening in Venezuela right now?

Paolo Raffone: Not really. I do not believe that the US would go against Hungary in one way or another. The trouble for Hungary comes mostly from Germany and France. It cannot be ruled out that the anti-Orban front would try to use all financial means to undermine the country.

Sputnik: How high is the support for the attitudes voiced by Orban? How likely will this support translate into the results of the upcoming European election?

Paolo Raffone: In the Eastern EU — the countries that became EU members after 2000 — and in some of the Baltic States, it is possible that Orban's views may find an appreciable support. The Visegrad group (Poland, Czech, Slovakia, and Hungary) is strengthening and deepening. Certainly, the psychological divide will be about Russia, particularly for Poland and some Baltic States. The Balkans would be much less worried about Russia. However, Romania may be more hostile to Hungary because of minorities and border issues.

It is too early to see if a common platform between the Visegrad countries, some Italian, Austrian, French, Danish and Latvian political parties can be achieved and become meaningful in the forthcoming elections. However, judging by the reaction of the traditional European parties and leaders it is possible that the Orban effect is larger than is visible today.