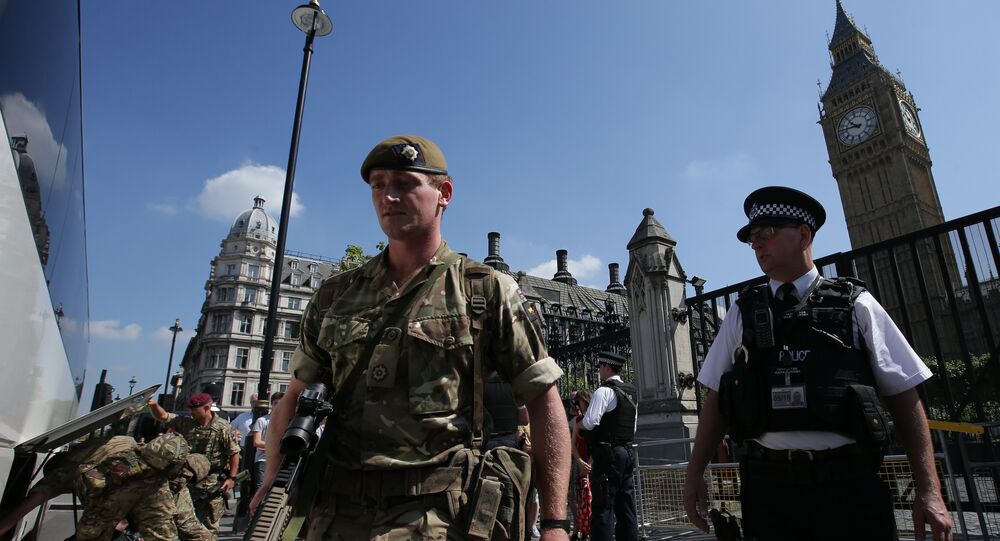 According to the Sunday Times, London might introduce martial law in the country should the UK leave the EU without a Brexit deal, fearing riots. Sputnik has discussed the issue with David Kurten, UKIP London Assembly member.

Sputnik: Today much of the UK media are reporting about the option of Britain using martial law to quell civil disorder that might ensue under a no-deal Brexit. Is this another example of project fear out in force?

David Kurten: Oh absolutely! Project fear is getting evermore ridiculous and they are simply trying to scare people with these kind of statement which simply are not going to happen.

© CC BY 2.0 / Steve Cadman
Gov’t Will Seek to End Free Movement in No-Deal Brexit Scenario - UK Home Office
It started off with silly things like ‘penguins will die in the Falklands’ then they ramped it up to saying we’re not going have any medicine, we’re not going to have food and that there’s going to be lorry cues right through Kent; but now actually saying that there’s going to be civil disobedience and that we must have martial law.

This really is trying to scare people and it’s very distasteful to say the least. The people who are saying this, they don’t want Brexit, they don’t want a no deal scenario on WTO terms and they really need to stop this kind of rhetoric and just prepare for what the people of Britain voted for which is to come out of the European Union.

Sputnik: Despite factions in the Conservative and Labour parties, cabinet ministers have demanded that a no-deal Brexit remain an option for Britain, ahead of a showdown in House of Commons over the matter. Is this the right approach do you think?

© Sputnik / Vladimir Astapkovich
Riots & Chaos: EU Intelligence Predicts Anarchy on Britain's Streets Post-Brexit
David Kurten: Well, its what’s going to happen unless the people who are trying to overturn Brexit, delay Brexit or overturn what they call a no deal. A no deal Brexit is not really a no deal Brexit, we will be going out on WTO rules and trade with the European Union under those rules, which is a global system, in the same way that we trade with the US, China, Australia…

No deal really is no problem. We’ve got all of these motions which are going to be laid in the House of Commons tomorrow, one to try and extend Article 50 up until the end of the year, some people are still trying to advocate for a second referendum; I mean really the people that are doing this want to stop Brexit, it’s obvious that’s what they want to do.

It’s quite incredible to most people who live outside of the M25, outside of the London bubble, that we are now having the same kind of arguments before the referendum in 2016. What I think everyone needs to do is prepare for WTO rules and we will walk into our freedom on 29th March this year.

© Photo : Twitter, Ireland Simpsons Fans ‏
Irish Simpsons Memes Roast British Politicians, Brexit & the Royals
Sputnik: On the subject of Ireland and the backstop, Ireland has dealt a blow to Theresa May’s hopes of obtaining the changes to her Brexit deal. On the subject of the backstop this the right direction the government should be taking on this issue?

David Kurten: Well the backstop was going to be a permanent arrangement at the end of the transition period and that would have meant permanent vassalage for the UK to the bureaucrats in Brussels.

Any backstop for even a day is too much. There shouldn’t be this backstop at all which puts a border down the Irish Sea and ties the whole of the UK into being a rule taker, from the European Commission and the European Court of Justice, and not a rule maker.

We also have to be very careful with a time limited backstop and the withdrawal agreement and the transition period itself, because even the transition period up to the end of 2020 will mean another 2 years of Britain being a rule taker and not a rule maker. We will be a vassal state for two years so I would say that we need to go out on WTO terms – the back stop is irrelevant.

Views and opinions expressed in this article are those of David Kurten and do not necessarily reflect those of Sputnik.

May's Spokesman: Changes to Brexit Deal Should Be Made to Gain Support of Parl't