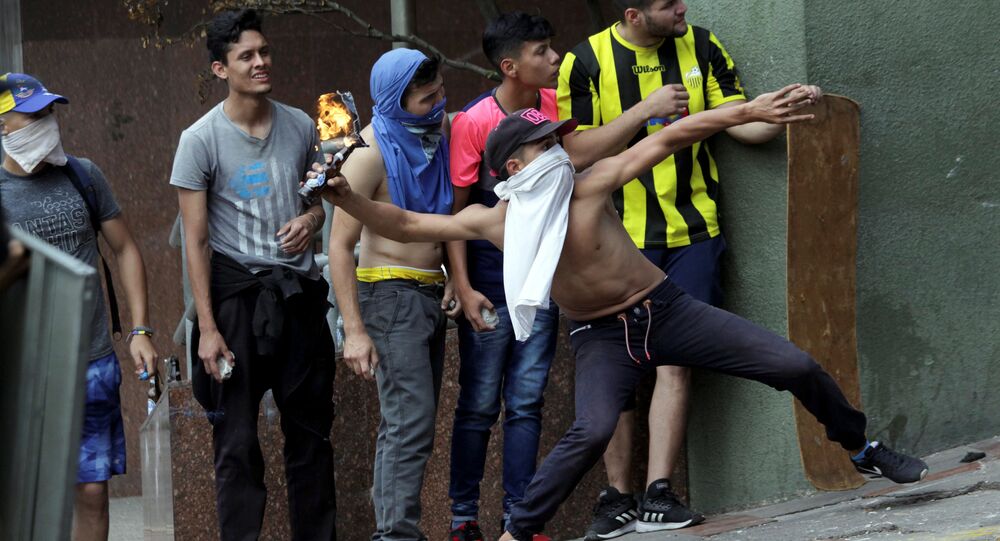 Venezuelan President Nicolas Maduro told journalists on Friday that he was willing to hold talks with the opposition to resolve the political crisis “through dialogue and diplomacy.” Maduro also announced plans to hold military drills in February to show that Venezuela is able to defend itself against any potential invader.

This comes after opposition leader Juan Guaido declared himself the interim president of Venezuela, backed by the US and its regional allies. In response, Maduro gave all US diplomats 72 hours to leave the country

Sputnik discussed the crisis in Venezuela with Michael Springmann, an attorney, author and former diplomat from Washington DC.

Sputnik: What's your take on the latest developments in Venezuela and is it all down to and underpinned by oil?

© REUTERS / Carlos Garcia Rawlins
Opposition Leader Guaido Demands Early Election in Venezuela as Soon as Possible
Michael Springmann: Oh, yes it is. It's basically a coup in all but name. The United States has created this bizarre situation, recognising an interim president, someone who simply declared himself to be president without any sort of election, following an election last year, in which international observes participated, and which they said it was a free and fair election.

Some nine million Venezuelans voted for President Nicolas Maduro, so it's just unbelievable that the United States is essentially trying to spark a civil war between various factions in the country.

Sputnik: What are the main reasons behind the latest protests now and what role has the United States had in this playing out at the moment, in your opinion?

Michael Springmann: The protests in Venezuela are directly laid at the door of the United States, going back 20 years, they've opposed Hugo Chavez's regime as being too socialist. George W. Bush in 2002 organised a coup that failed after two days.

And Barack Obama began placing economic restrictions on the Venezuelan oil industry, which is the main source of foreign exchange earnings and propped up the Venezuelan economy which was socialist and which was doing its best to bring hope and change to the poorest people in the country.

© AP Photo / Mohammed el-Sheikhy
History Repeating Itself? Analyst on How 'Libyan Scenario' is Unfolding in Venezuela
What's followed on from that, of course, is that between Obama and Trump putting more restrictions on the economy, trying to cut Venezuela off from the world banking system, trying to prevent them from borrowing money abroad to prop up their economy and creating issues with import of vital and essential things like food and medicine and you've got major issues, granted Maduro has made some mistakes in exchange rates and things like this, but by and large, the external and greatest difficulties are the result of American actions. And aside from that what's putting people on the street, of course, is the Central Intelligence Agency and its core of coup sponsors.

I mean the CIA overthrew the government of Chile not too long ago. The CIA has been involved in revolutions or something similar in Latin America, notably in Nicaragua with the Iran-Contra business, so I think that the Americans are at base at the cause of most of Venezuela's problems.

Sputnik: I'm just reading a tweet actually, I've been following, and it's actually asking who Juan Guaido is and this is from the Washington Post, so if the Washington Post doesn't know who he is why do we expect the American government to know who he is, it's very surprising.I mean there are similarities that have been asked by experts and commentators, and I suppose we understand why they're asking questions, and the global audience as to can this situation be compared to what happened in Syria and Libya, and what's the best way out of the crisis at the moment in your view? It's always going to be something that the American government, the United States is going to get involved with. I mentioned that in the first question in terms of oil of course. You've got two factions, you've got the US and their allies, and you've got countries that support Russia's point of view, so again, there's a potential conflict here, isn't there? How likely is there going to be some kind of conflict in the country, my colleague was talking to me about it, the armed forces are very pro Maduro and his predecessor, so it's difficult to assess where this is going?

Michael Springmann: Yes and I would definitely say that you can compare the situation in Venezuela to that in Syria and Libya. For example in Syria, the Unites States simply refused to accept the legitimate government of Syria and did its best to impose political and economic sanctions on the country and, when that failed, the United States invaded Syria.

In the case of Libya, for example, Muammar Gaddafi was overthrown and murdered because he had established a socialist country which had the highest quality of life in all of Africa. And he was trying to create an alternative political union of African states with Libya as the leader, and that's exactly what Maduro and Chavez have been trying to do in Latin America, trying to get Venezuela to put together an organisation in opposition and in contrast to the organisation of American States which is backed by America.

© AFP 2021 / Federico PARRA
Venezuela Opposition Head Declared Himself President After Pence's Call – Report
Certainly, I think that this opts for a chance of a civil war in the country and trying to get the Russians and everybody else involved in it could well happen, although I think Trump and his right-wing hawkish advisers might balk at that knowing well that Russia is not Venezuela, but definitely the way we get out of this thing is, well there's a couple of choices.

One which I don't think will happen is a regime change in the United States, trying to get rid of not only the leadership but the people in the bureaucracies who have been stoking these attempts at coups in Latin American and elsewhere.

I think it's very simple also to withdraw from Venezuela, to let Venezuelans work out their own situation and end these sanctions, economic and political, and again another fanciful but practical situation would be to abolish the Central Intelligence Agency and the Federal Bureau of investigation.

The FBI under Edgar Hoover was perfectly happy to let the CIA control events abroad with the exception of Latin America and the Caribbean, which he believed to be the FBI's territory and he wanted control over this.