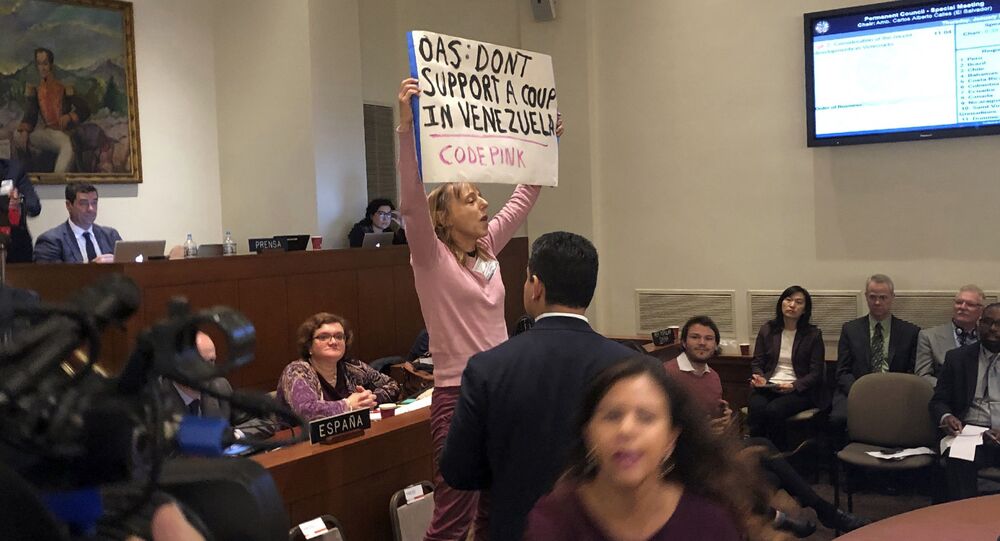 ‘It Was Really Disgusting': Codepink Co-Founder on Confronting Pompeo at OAS

Recalling the moment in which she confronted US Secretary of State Mike Pompeo at Organization of American States (OAS) this week, activist Medea Benjamin told Sputnik on Friday that it was revolting to hear Pompeo talk about what needed to be done in Venezuela.

Pompeo attended a special meeting of the OAS on Thursday, urging member states to throw their support behind Juan Guaido, Venezuela's opposition leader who on Wednesday declared himself interim president. That declaration was subsequently followed by the Trump administration announcing that it recognizes Guaido as the legitimate leader of the country.

​At the OAS, Pompeo told officials that member states need to align themselves with Guaido as a means to show their "respect for the rule of law."

"All member states who have committed to uphold the Inter-American Democratic Charter must now recognize the interim president," he said. "The time for debate is done. The regime of former President Nicolas Maduro is illegitimate. His regime is morally bankrupt, economically incompetent, and it is profoundly corrupt. It is undemocratic to the core."

But then, just as Pompeo wrapped up his remarks, Benjamin came through, holding up a banner that read: "OAS, Don't Support The Coup in Venezuela." And despite calls from Carlos Alberto Calles Castillo, the OAS' permanent representative of El Salvador, to cease her protests, as they aren't allowed during the session, Benjamin stayed in the room until she was ushered out by security officials.

​"It was really disgusting to be there listening to [Pompeo] and to see the smirk on his face when I got up to intervene," Benjamin, who is also the cofounder of social justice group Codepink, told Radio Sputnik's Loud & Clear.

"I think [the US' stance on Venezuela] harkens back to the days when the US thought that it could do whatever it wanted in Latin America… but Latin America has changed, and even people who don't like Maduro certainly don't want to see the US intervening, organizing, orchestrating who is in Latin America," she added.

© AP Photo / Mohammed el-Sheikhy
History Repeating Itself? Analyst on How 'Libyan Scenario' is Unfolding in Venezuela

The US has a long history of intervening in the politics of other countries when it doesn't agree with decisions their leaders make, even if they were democratically elected. Examples can be found in Guatemala, the Dominican Republic, Grenada, Chile and many others.

"People are very worried inside Venezuela, and they also think that there's a real chance that the US would do some kind of crazy military intervention, given how strong the wordings of [US President Donald] Trump and [US Vice President Mike] Pence and [US National Security Advisor John] Bolton have been," Benjamin told hosts Brian Becker and John Kiriakou.

For those interested in taking part in the movement, Benjamin is stressing that individuals make their voices heard by reaching out to their representatives and demanding that they do more than just say they're against the Trump administration.