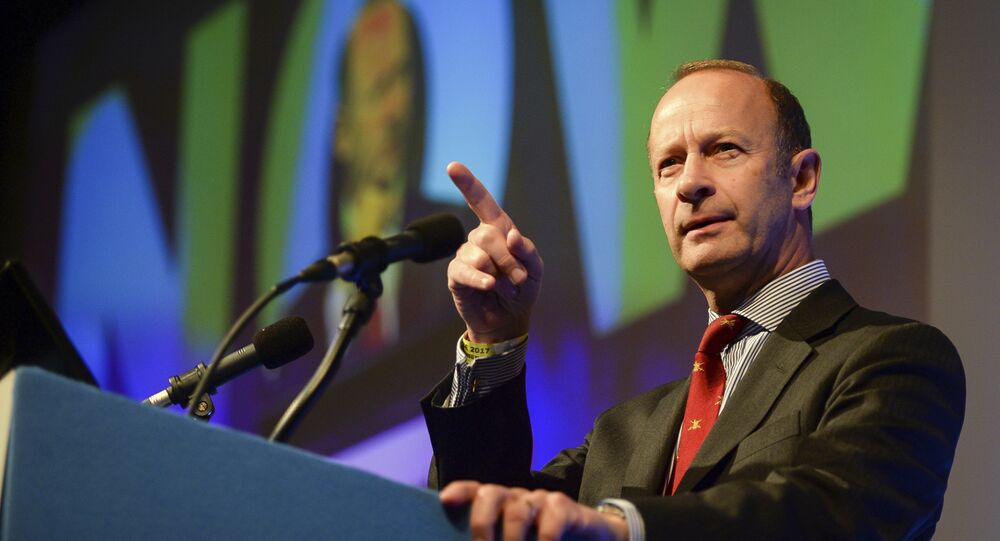 The Queen has made a rare political statement regarding Brexit, as Goldman Sachs have publicly claimed a difficult Brexit could affect investment in the UK. Sputnik discussed it with Henry Bolton, leader of Our Nation Party.

Sputnik: The Queens made calls for "unity" and "common ground", Do you think the United Kingdom has passed the point of no return as far as the union goes?

© AP Photo / Stefan Rousseau
Angry Brits Blamed Europe, Voted for Brexit, Ended Up With 'Rubbish' - Macron
Henry Bolton: Yeah, the whole Brexit debate since before the referendum, so through the referendum campaign and all the way up till now, and it's going to continue for some time. The whole debate has been a very divisive one and it's clearly polarized not only politics but a large element of society and business.

And I believe there's a great deal of work and effort that has to be put in to ensure that we come out of this whole thing with some unity. We're into whether the Brexit that happens or whether it in whatever way it happens: we're only going to succeed as a nation going forward if we've got some unity and some common vision as to what we want to be as a country and we can pull together.

Distinctly disappointing that Politicians in Westminster, including Prime Minister have utterly failed to offer the country a clear vision going forward and utterly failed to address this problem of a polarized situation in society over the whole debate.

Sputnik: It seems people have written about two choices. They can either believe the politician who say "everything's going to be fine" or they can leave the businessmen are now actually putting out the UK Who do you think they should agree with?

© REUTERS / Kai Pfaffenbach
German Gov't Cuts 2019 GDP Forecast Amid Weak Business Sentiment, Brexit Fears
Henry Bolton: Yeah, but it's not, businesses are staying here as well. Whenever something happens of this ilk. Whenever you change a system of government or an economic system or anything else like that, that change is something that business and society and politics have to adapt to. The status quo quite frankly, is something that the population of the United Kingdom voted not to keep. So change is going to happen. There will be people who are unhappy.

READ MORE: 'Because It's Worth It': Hard Brexit Contingency Plans by L'Oreal

Sputnik: On the 29th of March. She said we're going to be leaving the EU as planned or will article safety be delayed?

Henry Bolton: I think it's looking increasingly as though article 50 will be delayed. I have two views on this. One is that our Parliament simply cannot act in unity to deliver on what was a democratic vote of the people of the United Kingdom.

And I find that incredibly disappointing that continued shenanigans in Parliament mean that we're running out of time to get all the various pieces of legislation through. The other reason is that the government has failed appallingly to plan and prepare for the most complex scenario which is No Deal.

© AP Photo / Jonathan Brady
Did the Queen Just Interfere in Brexit Deal Negotiations?
Now, in that case, the British government has to put in place more, procedures more resources than if there was a deal. Had they started planning immediately after the referendum for that eventuality then we'd be in a good place now.

However, they still haven't really ramped up planning sufficiently. And we're going to be in a fairly difficult situation as a result on the 29th of March if we leave from No Deal.

So again ideally we need a bit more time nonetheless economically and in terms of the country to make a success of its future I think No Deal is the best that's on the table because at the moment, the only other option is Theresa May's deal which I find will simply tie our hands going forward. It's not in the European Union, but we will be tied to it.

We would be prevented from signing our own trade deals. We'd be subordinate to a whole raft of EU legislation that will actually mean that we're trying to make a success of ourselves globally, with one hand tied behind our backs, which is unacceptable.