Donald Trump’s administration has recognized opposition leader Juan Guaidó, a member of the Popular Will party, as Venezuela's interim president and increased pressure on the government of Nicolas Maduro, who, in turn, broke off diplomatic relations with the US. Sputnik delves into the situation.

Guaidó, whose name was barely familiar to most Venezuelans a few weeks ago, is a man whom Washington — and with it some countries of the "Lima Group" — support as head of the state, thereby not recognising the elections held in May 2018, and as a result of which 67% of the votes ensured Nicolás Maduro for another six years in the Miraflores Palace.

Trump's decision to recognize Guaidó as President is "another step taken by the opposition towards international legitimacy", prominent Argentine journalist and analyst Pedro Brieger said in an interview with Sputnik.

According to him, the opposition "has the opportunity to mobilise a large number of people" and "it believed that through demonstrations it could overthrow the Maduro government but failed to succeed".

In Brieger's view, this time "the situation in the world is on the side of the opposition". "Several countries have formed the Lima Group with the aim of contributing to the overthrow of Maduro and the formation of a new right-wing government in the country."

"All this prompted the opposition to recognize Guaidó as the Acting President and to set the goal of creating a parallel government, achieve international recognition and prove that Juan Guaidó is the only legitimate president of Venezuela," the expert believes. 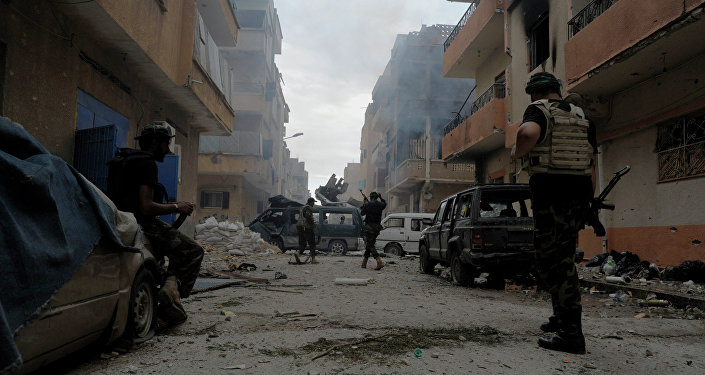 Some Latin American countries have already taken certain measures. For example, Chile decided not to invite the Venezuelan ambassador to an event at the Foreign Ministry because the country does not recognize the Maduro government, Brieger stressed.

At the moment, the situation is unclear: "Maduro did not take any action against Guaidó. The case when someone recognises himself as Acting President of the country while contradicting all the laws is a rarity. The government also failed to disband the National Assembly. There are historical precedents of parallel governments, some of which were successful, and some ending in failure."

The opposition decided to recognise this man as president, according to the expert, "this is a very risky step, it is 'all or nothing', and it seems that the most radical sectors of the opposition are dragging along more moderate ones, who were still ready for dialogue".

"We are returning to the old Monroe Doctrine of the 'backyard', the US behaves like the owner of the entire region and decides who is lawful and who is not, and Secretary-General of Organization of American States, Luis Almagro, has recognised Guaidó as Acting President", Brieger said.

Moreover, the analyst warned that "there is a hitch in what the opposition proposes: they want to hold elections but no one can guarantee that they will win these elections. If the opposition loses, will they recognise the Chavista president? They have never done this before".

Commenting on the situation with the Armed Forces, Brieger believed that there could be some discontent among them but to really come to a military coup is something completely different:

"In 2002, there was already a similar precedent when Hugo Chávez was overthrown as a result of a coup that lasted 48 hours but crowds of people took to the streets, demanding his return. Chavism is capable of mobilising people and the panorama that appears before us is far from being simple, this is playing with fire, and the USA is pouring oil on this fire."