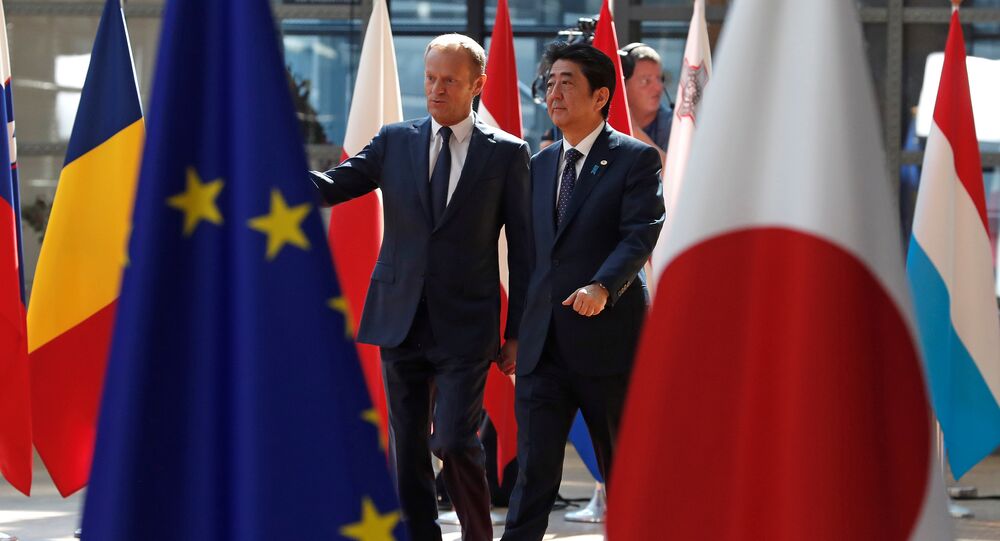 Japan’s Prime Minister Shinzo Abe has restated his state's commitment "to a free, open and rules-based international order". Speaking at the World Economic Forum’s meeting in Davos, Abe said it's time to "rebuild trust" in the international trade, adding that it must be transparent and effective in protecting intellectual property rights.

Japan is a member of the revamped version of the Trans-Pacific Partnership that took effect in December, while the EU-Japan Economic Partnership Agreement will come into force in February. Abe said that the entire world should benefit from the economies of scale and efficiencies that these two mega-deals will bring about.

Sputnik talked about Shinzo Abe's speech with Dr. Victor E. Teo — an Assistant Professor at the Department of Japanese Studies at the University of Hong Kong who is concurrently an affiliated faculty member of the China Studies Program and Korean Studies Program.

Sputnik: What's your take on Shinzo Abe's speech, did he say anything, you do you think?

Dr. Victor E. Teo: Well, I think he's actually repeating his speech in Davos to promote Japan and to promote goods or services that are being produced in Japan.

Sputnik: How significant then are these free trade partnerships he mentioned for Japan's economy now, moving forward?

Dr. Victor E. Teo: I think they're significant because the newly revised Trans-Pacific Partnership has just come into force over the new year, and the Japan-EU free trade agreement is coming into force on 1 February. So I think that with these two substantial free-trade blocs it would actually help propel Japan's economy further, and in light of what's happening with world trade these two free trade agreements are more critical than ever for Japan.

Sputnik: Now we know that Japanese relationship business-wise, and all relationships really with China have been rather fraught over the last decade, a few decades now, what can you say about current relations between the two countries in terms of trade specifically?

© Sputnik / Katelyn Oaks
Trump Seeks Congress Approval for Separate Trade Deals With Japan, EU, UK
Dr. Victor E. Teo: Well I think the Japanese and the Chinese have realised over the course of the last year in their interactions with the United States that they actually have to look again and re-examine the basis of their bilateral relations, but given the domestic political agenda of President Xi Jinping and Prime Minister Shinzo Abe, I think they need to approach each other in a more subtle manner.

So in that respect, even though Prime Minister Shinzo Abe has called on Japan to focus on the constitutional revision within Japan, Japan has actually made overtures to the Chinese and they're both trying to work out in a low-key manner how bilateral relations would actually be enhanced. This is particularly important, given that both China and Japan, but more so China, face a lot of trade tensions in bilateral relations with the United States.

Having said that, Japan is also facing the same sort of issues because President Trump has actually accused Japan of protectionism, of not doing right by the US in terms of trade and in terms of reducing the deficit, etc. So I think both the Chinese and the Japanese leaders are both looking for ways to enhance the Sino-Japanese economic relations to put some balance into their relationship with the United States.

Sputnik: It seems to me that Shinzo Abe is quite a pragmatic leader, obviously he's got his second term, albeit in Japan there's such a short-term of prime-ministers in being able to affect specific change. I know he has spoken recently with Prime Minister Theresa May in terms of trying to develop a trade relationship if the country does Brexit. He's got ongoing challenges with the superpowers: China and the USA as well. What's the general take within Japan regarding Shinzo Abe's leadership because, obviously, it's a challenging time in terms of the geopolitics and global trade globalisation etc. How do Japanese people feel that he's coping in these challenging times?

Dr. Victor E. Teo: Well I think for Mr. Abe I wouldn't say he's an extremely popular Prime Minister, but I think if we look back he's currently the Prime Minister that has actually surprised many by serving for such a long time, but it also testifies to the Japanese people's preference for what I call a known brand.

© AFP 2021 / JOHN THYS
Japan Ratifies Free Trade Deal With EU - Reports
Japanese consumers like branded goods and in that sense when it comes to their prime ministers they do like them to come from legacy families, big political families, so Prime Minister Abe is one of these politicians.

And I think it reflects a certain kind of attitude amongst the Japanese people that 'a devil that you know is better than a devil that you don't'. In that respect, Prime Minister Shinzo Abe appeals to the Japanese people because they believe that he will be able to stabilise the economy and continually enhance the economic prospects of Japan, more than other prospective candidates.

But what I would caution is to equate these to the Japanese electorate liking his neoconservative agenda in terms of revising the constitution or rearming Japan. I think the Japanese electorate sees this as inevitable, that Japan actually doesn't have a choice given the kind of strategic development that is going on in the neighbourhood, particularly with the rise of China as well as the nuclearisation of North Korea. I think they back the Prime Minister to a certain extent so that Japan will be able to defend itself.

What I'm saying is that Prime Minister Abe is the person for these so-called tempestuous waters of the international relations in Asia and that at the present moment, he's the leader to see Japan through these rough times.