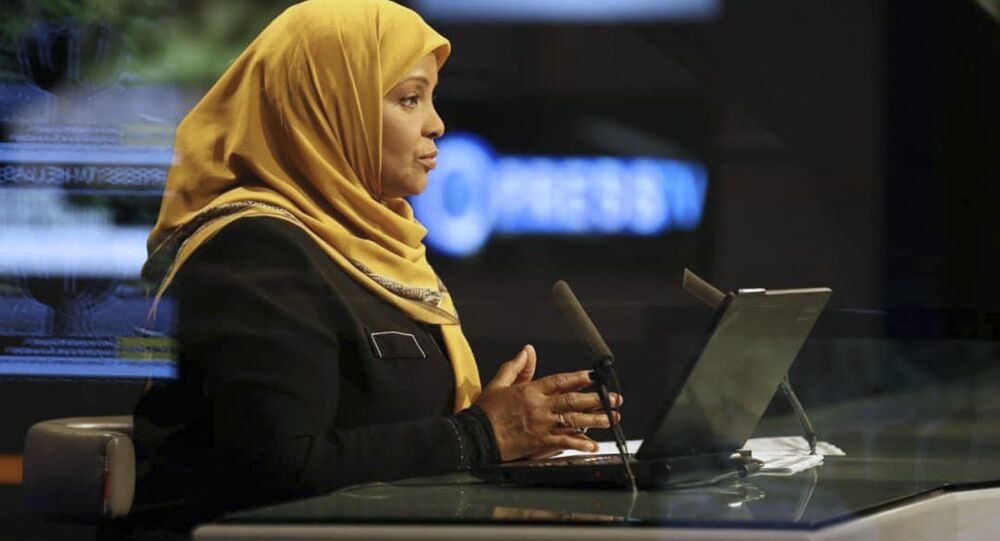 ‘Could Be You Next’: Iranian News Anchor Detained in US Warns of Abuse of Power

Protesters took to the streets of Washington, DC, to decry the treatment of Marzieh Hashemi, an Iranian-American journalist and anchorwoman for Iran’s Press TV who was arrested and held without charge for several days earlier this month.

People gathered outside the E. Barrett Prettyman United States Courthouse at Constitution Avenue and Third Street NW on Friday to demonstrate against Hashemi's treatment by the US government. According to MintPress News correspondent Alex Rubinstein, demonstrators held up signs that said, "No one is free when others are oppressed"; "I am a human"; "I am a Muslim"; and "It could be you next."

​Hashemi joined Loud & Clear on Radio Sputnik for an interview Friday to discuss her 10-day detention, which ended Wednesday.

​"I had just finished up making a documentary in St. Louis and [was] trying to return from St. Louis to go to Denver, where two of my kids live, and my grandkids. I was waiting for my flight. There were more than usual TSA agents at the gate. Let me say that whenever I travel into the United States, it's sheer hell."

​Hashemi was traveling with her son, Reza. "On domestic flights… I have to be there at least three to three-and-a-half hours prior to flight time… I am used to seeing TSA agents at the gate. I was called to the desk. So I went there and the agent said, ‘You've been selected to pre-board'… We gave them our boarding passes… as we entered the corridor before boarding the plane… that's where FBI agents were standing and waiting."

"They said my name and said, ‘You're coming with us, you're detained.' And I said, ‘Am I under arrest?' And one of the FBI agents said, ‘Yes, you are.'

She explained that the FBI put her up in a hotel, stayed with her the entire time as she was in handcuffs and then flew her to Washington, DC. There, authorities got her fingerprints and a DNA sample. "I protested," she said of the DNA test. Agents then explained that everyone has to provide DNA samples — even though the FBI told her she wasn't being tried for a crime but instead was being called to testify before a grand jury as a material witness. "Then they transferred me, by shackles, to a van."

Then she was asked to be processed once again, where she was asked to take off her hijab. "I said, ‘No, I can't take it off.' They said, ‘No, you must take off your scarf.' I said, ‘But it's illegal. I have the right to keep my scarf on. I'm a Muslim woman. I have religious freedom.' And they said, ‘You have to take your scarf off for the mugshot.'"

Despite never being accused of a crime, Hashemi was seized at the airport, handcuffed, taken into federal custody, flown across the country, and not given the opportunity to speak with family or a lawyer until days after she was first detained. She was also detained in a cold prison cell, despite not having been accused of breaking US law, and says she has been questioned in front of a grand jury four times now.

On Friday morning, Hashemi told RT, "What I realize is how easy it is for them to make someone disappear. If he [Hashemi's son] was not there, anything could have happened to me, and no one would have known where I was. And I'm just wondering how many people this happens to."

​Hashemi was filming a movie about the Black Lives Matter movement when she was detained without charge under the material witness law on January 13, when FBI agents took her into federal custody at St. Louis Lambert International Airport. She had been visiting family in New Orleans. She remains in the US.