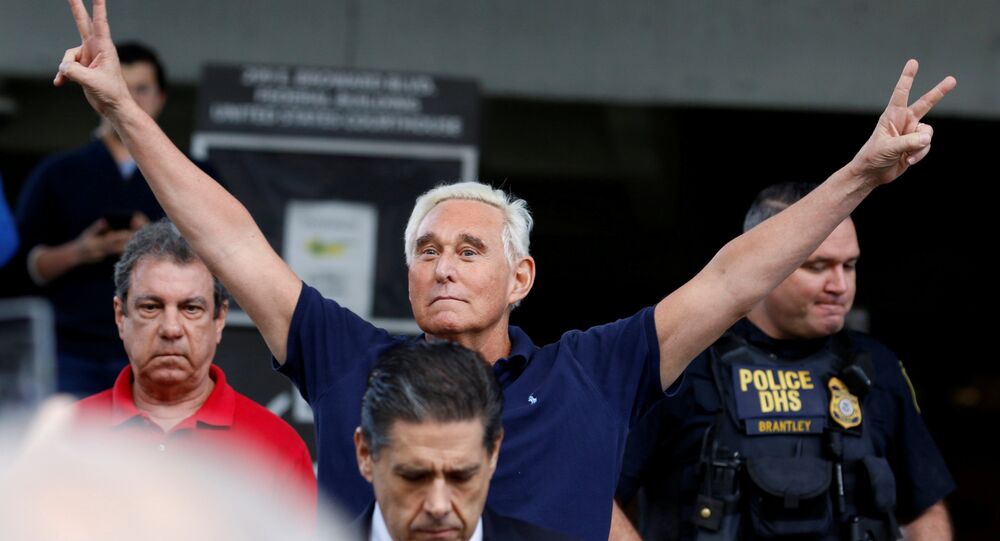 Former Donald Trump adviser Roger Stone was arrested Friday. While long expected to be a keystone in Robert Mueller’s hunt for Russian collusion with the Trump campaign, Stone’s indictment has “nothing to do with the substance of the Mueller investigation,” an expert told Sputnik. That hasn’t quelled the media feeding frenzy, though.

FBI agents stormed Stone's Florida home early Friday morning in body armour and with guns drawn in a puzzling show of force to arrest the 66-year-old politico, who was shortly after released on his own recognizance. The New York Times noted agents were later seen wheeling hard drives and other evidence from his home in New York City.

Stone was indicted by the Office of Special Counsel on seven counts: one of obstructing a proceeding, one of witness tampering and five of making false statements to the House Permanent Select Committee on Intelligence in 2017.

He subsequently posted a $250,000 signature bond at the Federal District Court in Fort Lauderdale and told a crowd outside the courthouse, "There is no circumstance whatsoever under which I will bear false witness against the president, nor will I make up lies to ease the pressure on myself… I look forward to being fully and completely vindicated," before flashing the twin V-for-victory hand signs made famous by his former boss, former President Richard Nixon.

"These [charges] have nothing to do with the substance of the Mueller investigation," which is alleged collusion between Russians and the Trump campaign, Jim Kavanagh, editor of ThePolemicist.net, told Radio Sputnik's Loud and Clear Friday.

​But that hasn't stopped media outlets from beating the drum about it being just that: for example, Bloomberg's Noah Feldman called the indictment a "Circle of Collusion" Friday, while other outlets have been screaming for months about how Stone's arrest was the key to proving the Trump campaign was coordinating with Russia. The Washington Post asked Friday: "Could Stone working with WikiLeaks — and the Trump campaign encouraging it — constitute collusion?"

Kavanagh noted the New York Times further mischaracterizes Stone's relationship with WikiLeaks by trying to paint him as part of that group when he only ever communicated with WikiLeaks founder Julian Assange indirectly, through an intermediary many believe to be comedian Randy Credico.

"Clearly he was trying to become the guy for the Trump campaign getting information from WikiLeaks — which he didn't have, and he was trying to use Randy Credico, who I guess is Person No. 2, in order to do this — and he was trying to induce Randy Credico to say things that weren't true, maybe. That's one of the things that Mueller's going to get him on. But one of the things the indictment says is that on June 14 [2016], the DNC [Democratic National Committee] announced they knew they had been broken in to, so from that time on, everybody in the world knew something was coming from somebody. What campaign wouldn't want to find out about that?"

"He was trying to present himself and get himself in the position where he was the guy who was going to find out what was coming, on behalf of the Trump campaign… But they're not indicting him for that," Kavanagh noted. "They're indicting him for not being completely honest about that in speaking about it to the committee."

Kavanagh said Stone's demeanor Friday reflected the fact that he "relishes in the drama" of things, noting that Stone had once quipped that "the only thing worse than being talked about is not being talked about."

"He's a protege of Roy Cohn," Kavanagh noted, referring to Senator Joseph McCarthy's chief counsel during the Army-McCarthy hearings in 1954 and who assisted the senator's investigations of suspected communists. "Cohn is one of the slimiest creatures in American politics, and Roger Stone himself was a self-styled ‘dirty trickster,' part of the Nixon [1972] ‘dirty tricks' campaign. So he is a guy who shouldn't be taken as a reliable character but likes this kind of drama as a trickster and a guy skirting around the law. So, he's going to play this up, I think."