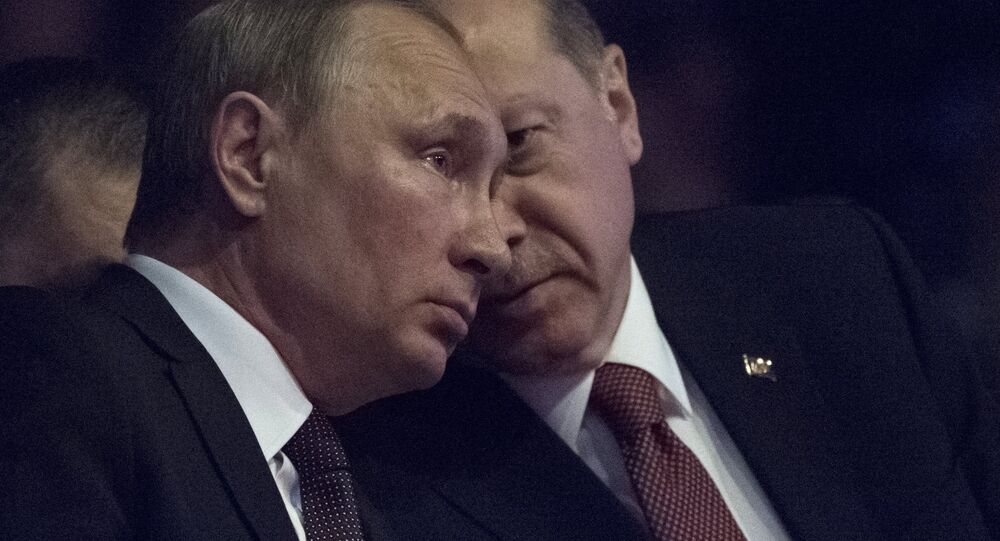 MOSCOW (Sputnik) – Russian President Vladimir Putin and his Turkish counterpart, Recep Tayyip Erdogan, will hold negotiations on Syria in Moscow on 23 January, focusing on the creation of the security zone in the northern part of the war-torn country.

The situation in the Syrian province of Idlib as well as in the Manbij region will also be on the meeting agenda.

© AP Photo / Hassan Ammar
Israeli Media Claims Tel Aviv Should Fear Trump's 'Carte Blanche' for Iran in Syria
Last week, Erdogan said, following a phone conversation with US President Donald Trump, that the latter had proposed creating a 30-kilometre (18-mile) buffer zone in Syria. The Turkish leader recalled that he had come with a similar initiative as far back as when Barack Obama was the US president, but to no avail. According to Erdogan, the future security zone will be controlled by the Turkish military.

According to Professor of International Relations at the Middle East Technical University in Ankara Huseyin Bagci, Putin and Erdogan are unlikely to reach any agreement on the security zone in northern Syria as the resolution of this issue depends on the United States.

"Tomorrow meeting will not reach any concrete solutions concerning security zone. It is America rather which will define, not Turkey and Russia. But Russia has to say something… Then, Russia is also unhappy for any military intervention and presence of Turkey in Northern Syria. Turkey's aim is to control the possible security zone but America will not give or 'share' the control of Northern Syria. It seems that it is American stake rather than Turkey's", Bagci told Sputnik.

© Sputnik / Mikhail Voskresenskiy
Syria Belongs to Syrians, Turkey to Give it Back to Its Owners as Soon as Possible - Erdogan
Gareth Jenkins, a non-resident senior research fellow with the Joint Center Silk Road Studies Program and Turkey Center at the Institute for Security & Development Policy in Stockholm, told Sputnik that, in fact, Trump and Erdogan were making two different proposals on northern Syria.

"Erdogan’s ‘safe havens’ and the ‘buffer zones’ suggested by the US are fundamentally different concepts. The first would effectively see Turkey moving its border southwards into Syria and – if Erdogan had his wish – be paid for doing so. The second would create a neutral area between Turkish and Syrian Kurdish forces", Jenkins said.

The expert expressed doubts that Putin would support Erdogan’s concept of the security zone as the Russian leader was persistently protecting the territorial integrity of Syria.

"I cannot see Moscow, which is committed to Syria’s territorial integrity and helping Damascus to reassert its control over the entire country, agreeing to allow Erdogan to occupy even more of Syria", the researcher said.

He added that Russia and Turkey could agree on the creation of the buffer zone between Turkey and the Kurdish forces, with Moscow persuading the Kurds to withdraw their troops from the border with Turkey in exchange for security guarantees for them.

One more topic of the talks between Putin and Erdogan will be the situation in the Syrian province of Idlib, which remains the last stronghold of militant and terrorist groups.

"It seems that Turkey lost control over Al Nusra* and other terrorist groups in Idlib. Idlib is ‘garbage of radical groups’ and nobody ’cleans up’ or throw away this ‘garbage.’ Russia's concerns are understandable and Turkey is the responsible side as far as Turkey's policies concern … I do not expect any sooner solution of this situation unless the [Syrian] government forces with the support of Russia makes this ‘cleaning work’", Bagcı said.

Jenkins also pointed out that there are differences on Idlib between Moscow and Ankara caused by Turkey’s inability to clear the region from the Nusra terrorists.

"I am sure that there are many people in Moscow who regard Turkey as having failed to fulfil the commitments given by Erdogan at Sochi. I cannot see Damascus and its allies being prepared to tolerate HTS* controlling the majority of Idlib for any long period of time. Turkey has demonstrated that it is unwilling or unable to commit the resources to defeat [them]… I think we are now going to see military operations against the HTS by Damascus and its allies. The only questions are when and what form the military operations will take – namely whether we shall see a campaign of attrition or an all-out assault", he said.

© Sputnik / Michael Klimentyev
From Putin-Trump Summit to Syria: Lavrov Sums Up Russian Foreign Policy in 2018
Another sensitive issue that will be covered during the talks is the situation in Syria’s Manbij, which was reportedly left by the Kurdish People's Protection Units (YPG) at the end of 2018 and transferred to the Syrian government troops. The issue is especially topical as US President Donald Trump has announced withdrawal of the US forces from Syria.

"Russia seems to be in favour of delegating control over Kurdish forces – and the territories they control – to the Syrian government. Whether Turkey will support this is yet to be seen but if it does, it will be an important turning point in the Syrian civil war", Seda Demiralp, an associate professor of political science at the Isik University in Istanbul, told Sputnik.

"I think it is likely that, at some point, we shall see both Manbij and the rest of the SDF-held areas revert to nominal control by Damascus. What is not clear at the moment is how tight this control will be in practice", he noted.

Both Russia and Turkey along with Iran are guarantors of the Syrian ceasefire regime as well as mediators of the Astana reconciliation process.

*Al-Nusra Front or Jabhat al-Nusra, known as Jabhat Fatah al-Sham or Tahrir al-Sham is a terrorist group banned in Russia