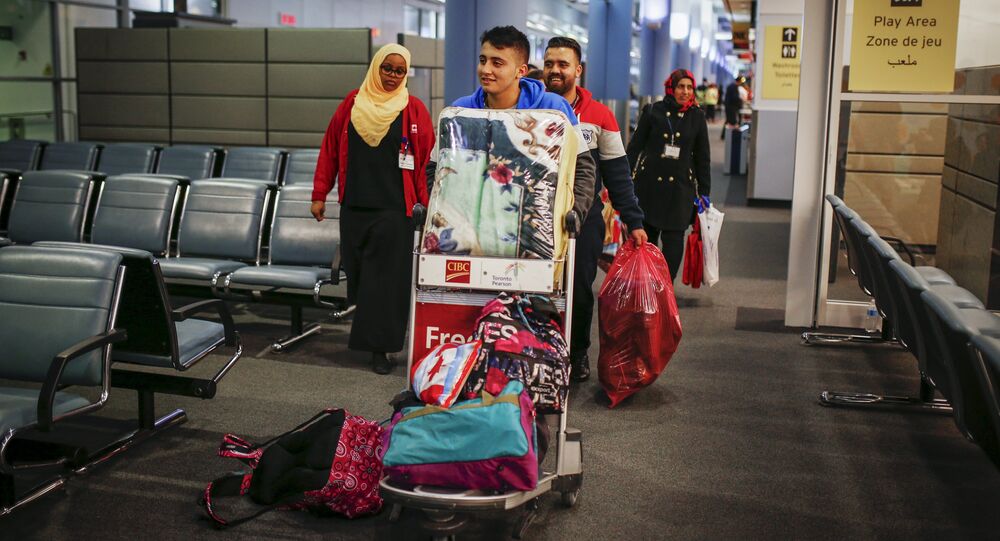 The Liberal Party of Canada has picked ethnic Chinese Karen Wang, the owner of a daycare business, as its contender against New Democratic Party (NDP) leader Jagmeet Singh in an upcoming vote in British Columbia. Wang's political campaign has sparked a backlash in the local community.

Some local observers are reportedly concerned about the language Wang used in social media posts to garner the supporters' attention for her candidacy. In particular, Wang has appeared to appeal to race, claiming to be "the only Chinese candidate" in the ring, as opposed to the NDP leader and main challenger Jagmeet Singh, whom she dubbed as being "of Indian descent".

Sputnik discussed the issue with Rémi Tremblay, the editor of Le Harfang, a contributor to the Council of Euro-Canadian and the author of Le Canada français, de Jacques Cartier au génocide tranquille.

Sputnik: it’s been reported that liberal candidate Karen Wang used Chinese social networks to connect exclusively with the Chinese electorate. Do you think this is another example of how tribal Canadian party politics is becoming, especially among left-leaning parties?

Rémi Tremblay: Because of multiculturalism, ethnic minorities often live in self-segregated communities, both physically and psychologically, apart from the mainstream culture. It has become a general trend among Canadian parties to try to appeal to these communities as they are perceived as “voters blocks”.

© AP Photo / Mark Schiefelbein, File
Chinese Envoy Accuses Canada of ‘White Supremacy’ in Huawei Arrest Case
The Liberal party has been especially successful in grasping the support of immigrant communities, but we have seen since the merge of the Progressive-Conservatives and the Canadian Alliance, some Conservatives trying to emulate them and launch websites in English and Mandarin for instance.

Karen Wang does not stand apart from other Liberal candidates who openly appeal to certain voters based on their race, ethnicity or background, what is new here is the scandal and resignation that followed.

Sputnik: Do you think appealing to voters on the basis of their ethnicity or religion will prove to be effective? Could such a practice seriously backfire?

Rémi Tremblay: The Canadian multicultural model has often been compared to a mosaic and it is an accurate analogy as most newcomers will join their ethnic communities without any desire to assimilate or to integrate to Canadian culture.

A nation must be held together by a common culture, a common will, common traditions, a common history, but in Canada, the ethnic divisions are so deep that there is nothing common except the different state institutions.

For the moment, Euro-Canadians still hold the majority, so there is a mainstream culture, despite what Justin Trudeau has claimed in the past, but with ever increasing mass immigration, we will eventually witness the end of the White majority. What will happen to the Canadian patchwork? It is hard to tell, but the past experiences in multicultural countries like Yugoslavia should serve as a warning.

© REUTERS / Adnan Abidi
India, Canada Vow to Fight Extremism With Modi’s Trademark Bear Hug With Trudeau
Sputnik: Could the current political system in Canada encourage political parties to use minorities as a useful tool during the election?

Rémi Tremblay: It is the case. The example of Quebec’s Liberals is telling. They, like Justin Trudeau’s Liberals, have adopted a strategy aiming at appealing to minorities.

So for the moment, a political party cannot only rely on minorities to impose itself on the majority, but with the White majority quickly eroding, it might be the case within 15 or 20 years from now.

Sputnik: What do you think is the main lesson of this ethnic scandal for Justin Trudeau’s liberal party?

Rémi Tremblay: There is no lesson to be learnt for Trudeau, as he knows he has surrounded himself with ethnocentric people. Most of his minority support does not come from citizens who claim to be “color blind” as the Americans put it, but people who are involved in ethnocentric groups and who openly defend their ethnic interests. It is therefore nothing new for him.

© Photo : Faith J Goldy/YouTube
‘We’re Going to Pass All Border-Jumpers to the Front Lawn of the Prime Minister’s Office’ - Toronto Mayoral Candidate
The scandal comes the fact that the candidate talked about the other candidate openly.

In the last election, when a Native Liberal candidate was stating that people should vote for him as a he was a Native, he was therefore implying that he was more desirable because the other candidates were not. Here, Karen Wang simply expressed her whole thought without any hypocrisy or unspoken words.

Sputnik: How the Liberal Party and the NDP are planning to play the race/identity card in the 2019 parliamentary election?

Rémi Tremblay:  Because of the mishandling of the economy and the crisis at the border, Justin Trudeau has little support from the Euro-Canadians. Minorities are his only chance to be reelected.

And when we talk about minorities, we can also include the French Canadian minority outside Quebec and the English minority within Quebec, but also the so-called “sexual minorities”.

© CC0
Analyst Explains Why Quebec Liberals Lost More than Half of Their Legislature Seats
To be re-elected Trudeau needs to avoid anything that could make him lose this support, but at the same time he will have to appeal to the White majority to obtain enough votes to ensure a victory.

The NDP will also try to appeal to minorities, but because they are more unlikely to be elected, they are usually not considered as an interesting alternative by the ethnic communities.

Maybe the fact that the leader of the party, Jagmeet Singh, is a Sikh will allow them to get some support from the numerous Sikh community, but even there, the Liberal Party, which can possibly win, is very close to the Sikhs and there are a few Sikh ministers right now. It might then be more tempting to vote for the Liberals than for a party that will not be elected.

Views and opinions expressed in this article are those of Rémi Tremblay and do not necessarily reflect those of Sputnik.