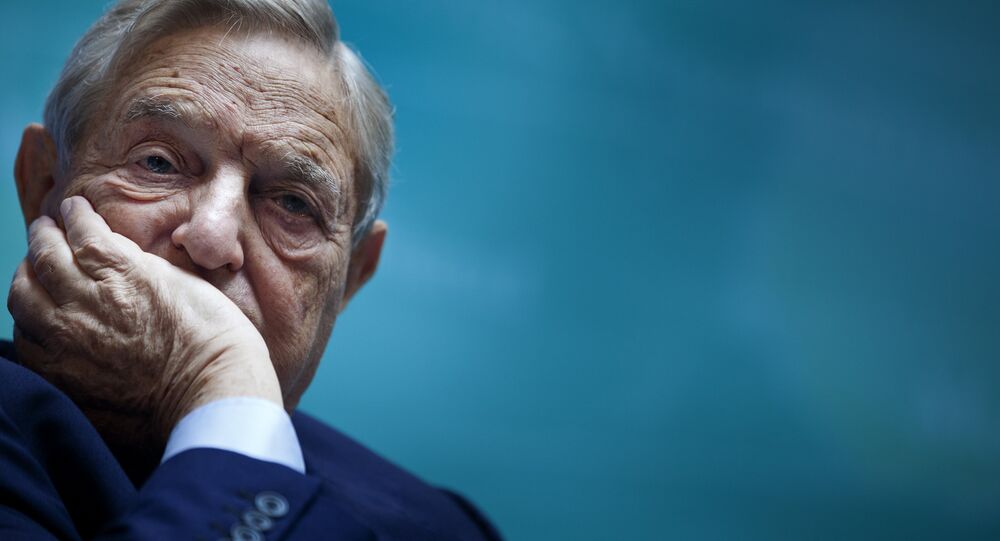 Sputnik Italia contributor Alessio Trovato investigates the purpose of George Soros' recent closed-door meeting with European Commission vice-president Frans Timmermans, and the broader campaign to convince Brussels to put Italy under the supervision of the 'troika' (the European Central Bank, the EC and the International Monetary Fund).

George Soros, a sworn enemy of the present right-populist coalition government in Rome, has been on a mission to subject Italy to austerity, with Italian media reporting on such efforts going back to at least 2011. Last October, in an explosive interview for Italian TV, former Prime Minister Mario Monti revealed that Soros had called him at the height of the European sovereign debt crisis eight years ago, urging Italy to accept 'assistance' from the IMF to dig itself out from under its debt problem. Monti refused at the time, saying following Soros' advice would have turned Italy into another Greece.

On 26 November 2018, in a meeting in Brussels with Timmermans, along with a representative of EC President Jean-Claude Juncker, Soros was again assumed to have brought up the debt issue, with Italian media speculating heavily regarding the vague comments of an EC spokesperson, who said only that they "cannot confirm or deny whether Italy's budget was discussed".

© AFP 2021 / ERIC PIERMONT
Scapegoat or Bully? Why EU Right, Erdogan and Facebook Gang Up on Soros
Meanwhile, Sputnik Italia contributor Alessio Trovato writes, Soros' Open Society Foundations have been cutting paychecks "to a considerable number of journalists and influencers whom (surprise) constantly refer to him as a 'benefactor' and 'spontaneously' support all of his campaigns, including his support for migration, mondialism, Russophobia and colour revolutions".

A big part of the problem, according to Trovato, is that the mainstream media continues to completely ignore Soros' activities, or reports on them only with reluctance, even as the billionaire seeks to interfere in democratic processes and the internal affairs of sovereign nations.

"Even journalists who do not receive 'favours' from the magnate are either incapable of saying anything on this subject or prefer not to do so," Trovato wrote. "Hence we come to the case of Ivo Caizzi, Luciano Fontana and Federico Fubini, who are likely to become a classic in the annals of Italian journalism, and show the battle for journalistic independence being waged inside the mainstream media."

Last week, Caizzi wrote an open letter to his employers, asking them to respond to several serious questions in the interests of the newspaper, his fellow journalists, and readers. In the editorial, the journalist asked whether editor-in-chief Fontana's behaviour has been corrected, and whether it would be appropriate for Fontana to limit himself to expressing his personal opinions to editorials, op-eds and comments. Caizzi asked whether reports of 'imminent sanctions' could have adversely affected the financial markets and played in the hands of speculators (who, incidentally, include Soros) betting on the Italy's destabilisation, the collapse of the country's stock market, and the growth of yields on Italian government obligations.

"Can we hope that in 2019, Corriere will return to its motto of 'providing independent and high-quality information and ensuring maximum reliability of the news from the first to the last page'?" Caizzi asked.

Commenting on the editorial, Trovato suggested that "even the rebellious Caizzi" did not comment on two issues which "he is certainly aware of".

Specifically, Trovato noted, "Soros met Frans Timmermans behind closed doors in Brussels [in November]. The 88-year-old Soros is not one to head off to Brussels for no reason. If he is talking to someone, it means he has something to ask, or offer. Mr. Timmermans is not just anybody, but the so-called 'spitzenkandidad', the lead candidate for the presidency of the European Commission in the event of victory for the socialists and the democrats in the upcoming elections to the European Parliament. What did they talk about?  A trifle –Soros seems to have asked Timmermans to take measures so that the European Commission rejects the Italian tax manoeuvre to allow the troika to be brought to Italy. In effect, Soros essentially asked Juncker's deputy…to turn Italy into the same kind of hostage to the EU as Greece. In this sense, [Corriere's reporting] turned the Italian media into a sort of fifth column, preparing the markets for the upcoming speculative moves from the inside."

Secondly, the journalist noted, Federico Fubini is a member of the European Advisory Board of the Open Society Foundations, and, ironically, on the European Commission's 'expert group on Fake News'.

© REUTERS / Bernadett Szabo
'Soros is Among Few Individuals in World With His Own Foreign Policy' – Analyst
"The point is, how can one believe that Europe is struggling against Fake News when it also produces it? Can we believe in the impartially of information published thanks to the 'donations of generous and disinterested benefactors'?" Trovato asked.

Ultimately, the Sputnik Italia contributor noted, "our only chance for survival lies in being aware of what's going on and in our own analytical skills. Discuss, doubt and check everything – otherwise you will never understand who you're up against. Maybe it's a troll – an agent of the Kremlin, or perhaps someone funded by the Open Society, the Aspen Institute, the Bilderbergs, the Atlantic Council, the CIA, Mossad, the FSB, a proponent of the troika trojan horse, or just about anyone else. Never trust! Even those who tell you not to believe anyone!"