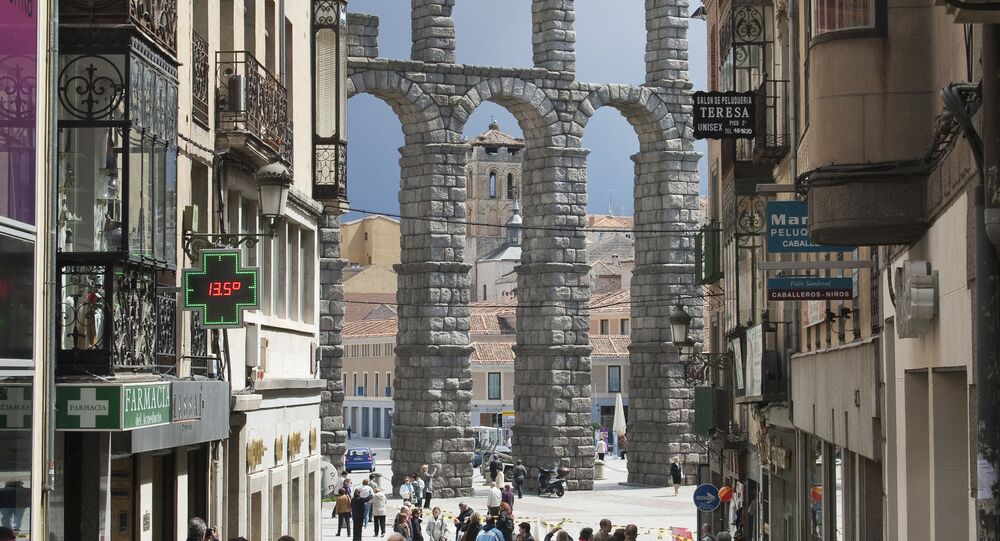 Satan, the Prince of Darkness himself, has made headlines this week, as residents of the central Spanish city of Segovia have protested against the local government’s decision to install a statue portraying the devil.

The fuzz was all for nothing when a judge dismissed the complaints, and approved the installation of the bronze Lucifer. Sputnik spoke with physician Dr. Monica Lalanda for more insight on the issue.

Sputnik: What's the story behind the commission of the statue?

Monica Lalanda: The local council commissioned a statue to José Antonio Abella, who is a retired GP. The reason behind this is that they wanted to attract more tourists to an area of the town that doesn't get visits by many people.

© Photo : City of Segovia
Seduction of Evil? Outrage Over Smiley, Selfie-Taking Satan Statue
Segovia is a town that is very well known for his aqueduct, and it receives millions of tourists per year. So there is a part of Segovia that doesn't actually attract as many people, so the council wanted to put something in that particular corner that would have made people keen in going up to the area — where you have a magnificent view of the aqueduct, in fact.

So they asked José Antonio, who has already done a large sculpture to for the town many years ago, to do it. And there was also a patron, who has paid for it; so it didn't really come at the expense of Segovia's citizens.

Sputnik: What do you think of the locals’ complaints and the scare of satanic tourism taking over Segovia?

Monica Lalanda: It really makes no sense whatsoever, there isn't such a thing as the satanic worship anywhere. The whole thing is very strange: it came out of the blue, and it's completely unexpected. Even all the political parties were in favour of this statue — and to get all the politicians to agree on something, that's already in itself something even more strange than satanic worship.

The legend is a very popular legend in Segovia; in fact, my kids, who grew up in Segovia and went to school there, learnt about it at school, as part of the history of Segovia. The story tells that there was this little girl, who was fed up of going to the river and carry her bucket of water daily.

© AP Photo / Morry Gash
Satanists Deny Boehner’s Claim That Ted Cruz is Lucifer
Then the Devil turned up and said, "Do you want me to build an aqueduct? I'll get your soul in exchange." And the little girl said, "Yes, that's fine." But then she regretted it.

Eventually the Devil promised to build the aqueduct within the night; but one single stone was missing from the building of the aqueduct. So the aqueduct was built and the little girl kept her soul. It's a sort of a kind story: it is not a very strange or twisted or even against-the-religion kind of story. It's just a legend like so many others in the world. So, yes, it's very strange.

Sputnik: The statue of Satan triggered this whole frenzy, but how would you describe it to people who haven’t seen it in the real life or online?

Sputnik: Why do people in 2019 even believe statues of any kind are important in the “modern world”?

Monica Lalanda: We are very much into images nowadays, because we live so fast and because of the social media. Because our brains are wired to like images, we tend to pay more attention to anything that has got an image attached to it. And in this case, the image is just a statue. So maybe for that reason, it has got to so many people's imagination.

The whole reaction has been fuelled by social media: I have lived in Segovia for a long time, and they are kind people, they are friendly, and they are very used to visitors — they're just people who live their lives in a very friendly, extremely pretty town.

YouTube/ViralHog
Huge Dust Devil Caught on Video in California
So the whole reaction has been fuelled by just a few, but it has pinched the imagination of many. We have come up with this as a result, but still I really find the whole thing very unbelievable. I don't know how we ended up here, and being in the news of the whole world with something that's as odd.

Sputnik: The statue was commissioned to increase tourism in the area of Segovia, and the online petition triggered a massive social media response to the story, which brought the city under the eyes of millions. So would it be fair to see that those who wanted installation succeeded in their mission?

Monica Lalanda: I have listened to the local council saying that they will have never ever been able to pay for so much propaganda, which actually came for free.

But to be honest, Segovia is such a pretty place, and it doesn't really need a devil statue in it. I really advise anybody who listens to this to visit Segovia, because it's just an amazing, not well-enough-known place abroad.

So, yes, maybe it will attract more people, and I'm sure people will be fighting to get a selfie with the devil, because I'm sure it will be up there soon. So, who knows?

Views and opinions expressed in this article are those of Monica Lalanda and do not necessarily reflect those of Sputnik.