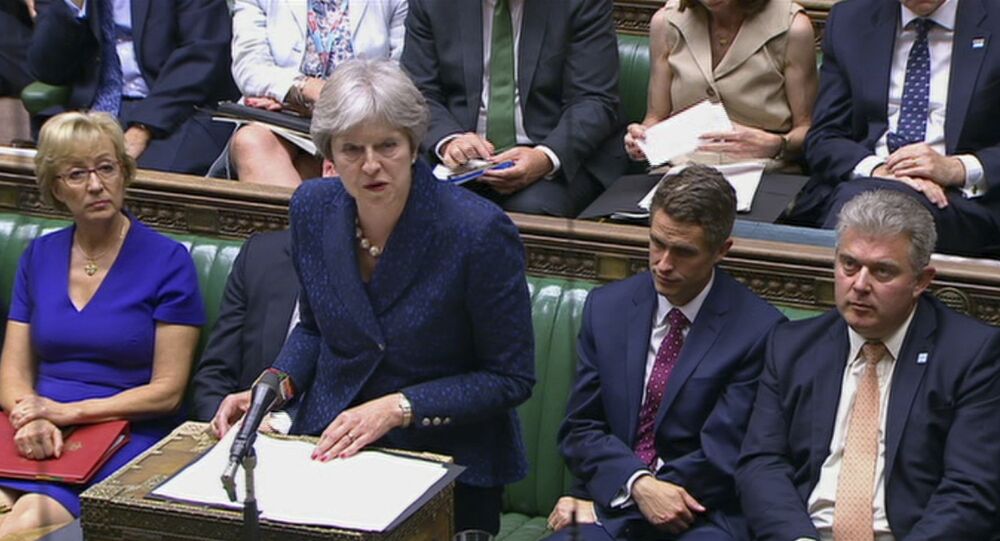 Theresa May will continue meeting with MPs in a bid to find a way out of the Brexit deadlock. Now that lawmakers have rejected her withdrawal agreement, May must present a new plan by 21 January. Earlier, she won a vote of no confidence by a close margin of 19 votes, with the Democratic Unionist Party's (DUP) ten votes playing a crucial role.

More than two-thirds of lawmakers voted against the proposed agreement, marking the largest defeat for a sitting UK government in history; 118 votes against the deal came from MPs from PM May's own Conservative Party.

Meanwhile, EU Chief Brexit Negotiator Michel Barnier said on Wednesday that the risk of Britain crashing out of the EU is at an all-time high. This came as European Council President Donald Tusk suggested that the United Kingdom should remain in the bloc.

© REUTERS / Clodagh Kilcoyne
UK House Speaker May Be Denied Lordship Over Brexit Debate Vote - Reports
Sputnik: To what extent is Theresa May prepared to alter the withdrawal agreement and what changes are we likely to see?

Yannis Koutsomitis: Well, this is a very good question because Mrs. May is being very adamant about not changing the agreement in any case. But there is talk right now of a possible new proposal, a new approach by Mrs. May. But the real problem right now, in my understanding, is that she needs to protect the integrity of the Tory Party. This is the main aim right now for Mrs. May, not to cause a rift within the Conservative Party.

Sputnik: Is a no-deal Brexit more or less likely now after Mrs. May's deal was rejected in Parliament?

Yannis Koutsomitis: I think it is more likely because time is running out. The Tory Party has three different approaches to the procedure and until now there is no legal […] a no-deal Brexit. So it will be a chance for a no-deal Brexit.

Sputnik: We saw that only 10 DUP votes helped Mrs. May to secure her position as prime minister. Meanwhile, Jeremy Corbyn has refused to join the talks unless a no-deal Brexit is ruled out. How vital are Labour Party votes for the deal?

© REUTERS / Toby Melville
Fresh Brexit Referendum Would Leave ‘Large Percentage of UK Citizens’ Feeling Betrayed By Gov’t – Professor
Yannis Koutsomitis: Well, Labour Party votes are crucial for any deal. We have seen that a large part of Tory MPs will not give their consent to any deal that is less than a no-deal Brexit. So, for any deal with the EU to come forward, there needs to be a consensus with the Labour Party. So, Mrs. May must push really hard for a consensus with Mr. Corbyn. And if she has to agree to general elections, so be it, because it is the future of the country that is at the stake right now.

Sputnik: Mrs. May said that Britain will be leaving the European Union on 29 March and former PM Tony Blair said: "a delay to Brexit is now inevitable". How do you think the situation will develop further?

Yannis Koutsomitis: Well, we have seen reports in the papers today that the electoral commission is already preparing plans for a delay of the exit talk. I think this is inevitable. In order to have a proper deal, there needs to be a real consensus with the European Union, and extend the Article 50 [deadline for] at least for three months.