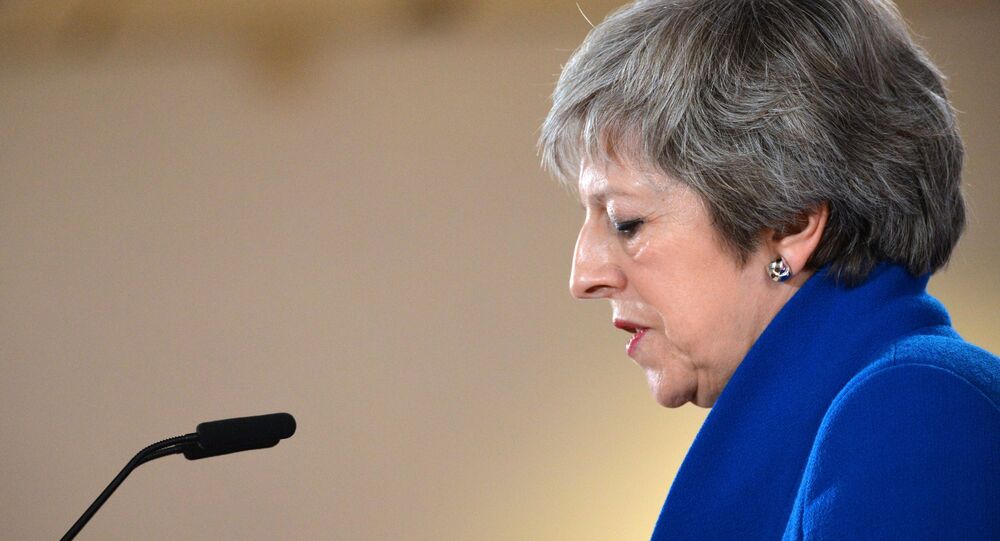 Brexit: Defeat of Such Scale Would Cause PM to Resign in Normal Situation – Prof

Sputnik has discussed the crushing defeat that Prime Minister Theresa May's deal suffered during a vote in the Parliament on Tuesday with James F. Downes, a Professor in Comparative Politics at The Chinese University of Hong Kong.

Sputnik: Theresa May has not managed to push through her Brexit deal in parliament. What complications will this have on Brexit negotiations?

James F. Downes: Prime Minister Theresa May's Brexit deal has been rejected by 230 votes — the largest defeat for a sitting government in history. MP’s voted by 432 votes to 202 to reject the deal. The defeat for the Prime Minister is not only historical. It is a damning verdict by MP’s on her proposed Brexit deal and has plunged Britain further into political chaos.

The vote will create more complications for the type of Brexit that we are likely to see, with Remainers and Leavers both voting unanimously against the prime minister’s proposed Brexit deal. It is difficult to fully assess both the magnitude and sale of such a defeat. In any normal political situation, a defeat on this scale would cause a prime minister and their government to resign. These are not normal times. The chances of Britain now crashing out with a "no-deal" scenario by 29 March 2019 has also now increased considerably. This would be a nightmare situation for the financial markets.

Sputnik: Theresa May said that the vote showed nothing about what the Parliament supports. In your view, what does the Parliament want for Britain? How can this vote impact the exiting process from the bloc?

James F. Downes: The prime minister’s proposed Brexit deal sought to have a "Soft Brexit". This effectively meant having a gradual departure from the EU on the 29th of March and setting up a long-term transition deal for free trade and a staggered departure from key EU institutions such as the European Court of Justice.

© CC0
'Beginning of the End of Brexit': UK Politicians React to Theresa May's Deal Crushing Defeat
The major problem right now is that there is no clear majority or indeed opinion about what type of Brexit politicians in the UK House of Commons support. All parties, particularly the Conservative and Labour parties are completely divided and split on this issue. There is also no clear opinion amongst Brexiteers as to the type of Brexit they want. Leading Brexit figures such as Jacob Rees-Mogg, former Foreign Secretary Boris Johnson and the Environment Secretary Michael Gove all have completely different positions on the ideal version of Brexit that they would like to see. Brexit is an issue that cuts across political lines deeply and sharply. In short, we do not know what Parliament wants for Britain currently.

Sputnik: The German Foreign Minister says the EU and UK could have new talks if the deal is voted down. Do you think this statement had some influence on the vote? What chances do you think May has in renegotiating the deal?

© AP Photo / Kirsty Wigglesworth
UK Lawmakers Overwhelmingly Vote Down May's Brexit Deal
James F. Downes: I think that the statement by the German foreign minister has had very little influence on the overall vote. It is still extremely unlikely that the EU will shift their position on Brexit and renegotiate with the UK. We have seen key EU officials in the last month, ranging from the EU Commission President Jean-Claude Juncker, to the EU Council President Donald Tusk and many individual leaders of EU member states outlining how the current deal that the UK has is the best and also the final deal on the table. In short, they state that there is no negotiation on the table.

The only area where the EU could budge and allow a concession is to provide Britain more time and this could potentially lead to an extension of Article 50 beyond the original date of 29 March 2019. However, this all depends on whether the Prime Minister Theresa May now has the political mandate to remain in office now that a no confidence vote has been tabled against her. I previously stated in an interview with CNBC Asia back in December that Theresa May is still living in fantasy land and I stand by what I said back then. She is still living in a fantasy land and the sheer scale of the Commons defeat further backs this point up.

Sputnik: The opposition leader Jeremy Corbyn tabled a vote of no confidence against May. What political future awaits May?

James F. Downes: This is a very important question. If Jeremy Corbyn is successful in tabling a vote of no confidence vote against May, then a General Election could be held. The no confidence vote will be held at about 19:00 GMT on Wednesday. If May and her government lose the vote, then a General Election could trigger further political uncertainty and also economic uncertainty with the financial markets. If such a situation arose, it is not currently clear if the Conservatives could gain a majority, how well the main opposition party Labour could fare electorally (they are just as split ideologically to the Conservative Party) and how exactly British voters would vote. Once again, we are in completely unprecedented territory and uncharted waters. There is very likely now a real possibility that Brexit will be further delayed and watered down. The future of Brexit and that of Theresa May now depends on the no confidence vote and more uncertainty and political risk lies on the horizon.

The most worrying implication right now is not what type of Brexit will be implemented, but one of polarization, with greater disconnect increasing between British voters and elected representatives in the future ahead.

Sputnik: What implications for democracy and political trust in Britain will the vote bring?

James F. Downes: The political future of Britain is increasingly uncertain. If a second Referendum was held or Article 50 was revoked, this is likely to further exacerbate polarization within the United Kingdom and further undermine the trust of British citizens in British democracy (both Leavers and Remainers) and overall trust in politicians. My main argument is the same as before, that we should not be worrying about the short-term economic consequences of Brexit, but the long-term political implications for democracy in Britain. Britain is effectively going from being the "United Kingdom" to the "Disunited Kingdom".

This lack of trust amongst citizens could have disastrous implications in the long-term for Britain as a whole and it could take decades for this trust to return and further polarization is likely to set in politically. Similar patterns of electoral volatility and record declines in political trust for mainstream parties can be observed across the European continent lately.