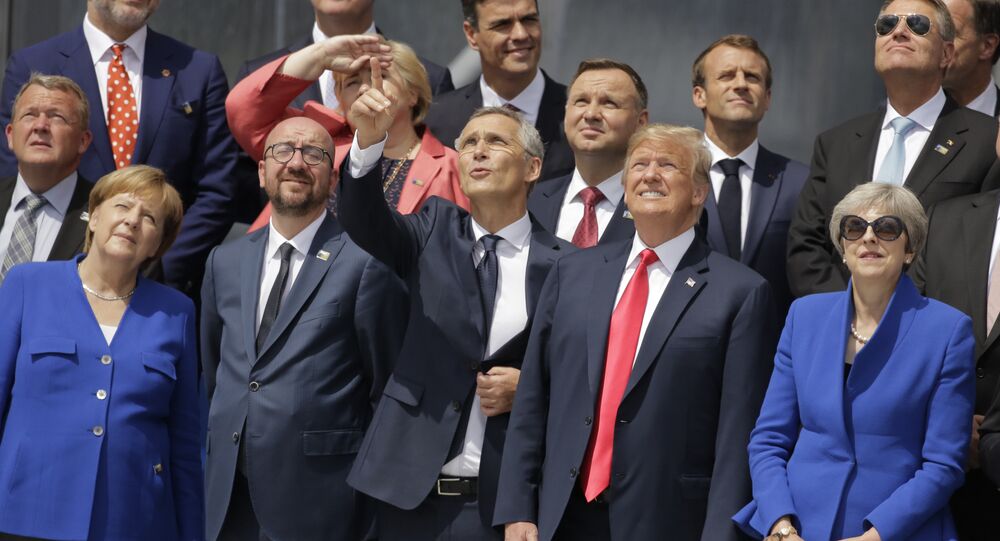 On Monday, The New York Times cited unnamed senior administration officials as saying that US President Donald Trump has ostensibly questioned US membership in NATO and expressed a wish to withdraw the country from the bloc.

Sputnik: What are your thoughts on the report that US President Trump repeatedly expressed his wish to withdraw the country from NATO?

James Fetzer: Well, Trump as a businessman has approached this from the point of view of finances and of course until very recently only four other members of NATO paid the 2 percent of GDP — Britain, Poland, Greece, and Estonia — which he found unsatisfactory. But I believe there are other reasons why NATO has outlived its usefulness, including that, instead of serving as a defensive organisation against a no longer extent Soviet Union, it’s being used for wars of aggression such as the slaughter in Libya, which was orchestrated by Hillary Clinton with the approval of Barack Obama and John Brennan. It was a great atrocity of one of the most humane societies ever realised on the face of Earth.

© AP Photo / Matt Dunham, Pool
'Wildest Success That Putin Could Dream of': DC in Panic Mode as Trump Reportedly Mulled Withdrawal From NATO
And now I think the fact that there has been an encroachment on the Eastern Bloc nations [that] Ronald Reagan had solemnly agreed with Mikhail Gorbachev that they would not be weaponised, westernised, no attempt to be made become NATO nations that the United States has grossly violated, beginning with Bill Clinton. And therefore, I believe that withdrawing from NATO and allowing NATO to fall apart would be a good thing for the world, for Europe, for the United States altogether.

Sputnik: Professor, the report by The New York Times details Trump’s alleged words dating back to last summer. Why is the media outlet reporting about this now?

James Fetzer: Well, that’s a great question. There has been a massive assault on Trump by the mainstream media and the Democrats because he is being far more successful than they had ever imagined. He has strengthened the American economy prior to the midterms, for example. He had a 50 percent approval rating according to the Rasmussen Poll. He even had a 40 percent approval rating from black Americans. This is devastating potentially to Democrats because if they lose the black vote on which they count having 90 to 95 percent, they are going to have great difficulty winning elections. This is another reason why they are opposing the wall. They want immigrants to come into the United States because they expect they are going vote Democratic. So I believe this is part of an ongoing effort to trash Trump, where the media is reporting only the Democratic version of events, which we know of course, was long since infiltrated by the CIA, in Operation Mockingbird beginning in the 1950s.

Sputnik: Professor, can Donald Trump actually withdraw the United States from NATO, like he withdrew from various other organisations?

James Fetzer: Well, of course, if the president the suggested that might be possible I would have to look at the legalities involving it, but certainly, some of his decisions of the past have been poor ones, withdrawing from the Iran agreement, for example, was not well founded. That was very-very troubling because it made it appear as though he was following an Israeli foreign policy rather than American. The three reasons he gave, namely that the treaty would expire in 2025 was meaningless because it could be renegotiated; that it didn’t cover Iranian military bases that would have been appropriate because it was only concerned with Iran’s nuclear programme and the fact that it didn’t cover Iran’s ballistic missile development was also inappropriate because every sovereign nation is entitled to its own self-defence. So he made a blunder with regard to the Iran deal. My personal opinion is, however, is that NATO has long since outlived its usefulness and should go into the dustbin of history.

Sputnik: How badly does Europe need the US in the bloc? Could they move to be more independent from the US?

James Fetzer: Well, I think that there are many reasons why Europe is growing more independent and, in fact, I think that there is a much more natural reliance between Europe and Russia for example than between Europe and the United States at this point in time; particularly on commercial and economic grounds. The Iran sanctions, for example, have threatened to cost Europe tens of billions of dollars in trade and commerce. So that is all very bad, detrimental to Europe to pursue a policy of sanctions on Iran that was not justified in the first place; where even American intelligence agencies as early as 2007 have concluded that Iran was not pursuing a nuclear weapons programme, which they reaffirmed in 2011 and D-D from the Mossad came on board in 2012 that Iran was not pursuing nuclear weapons, which means these sanctions which are harmful to Europe and to the rest of the world are a bad idea. And of course, pulling out of the Iran deal was not justified from the beginning. So, hopefully, he will display more wisdom in foreign policy than he has heretofore.