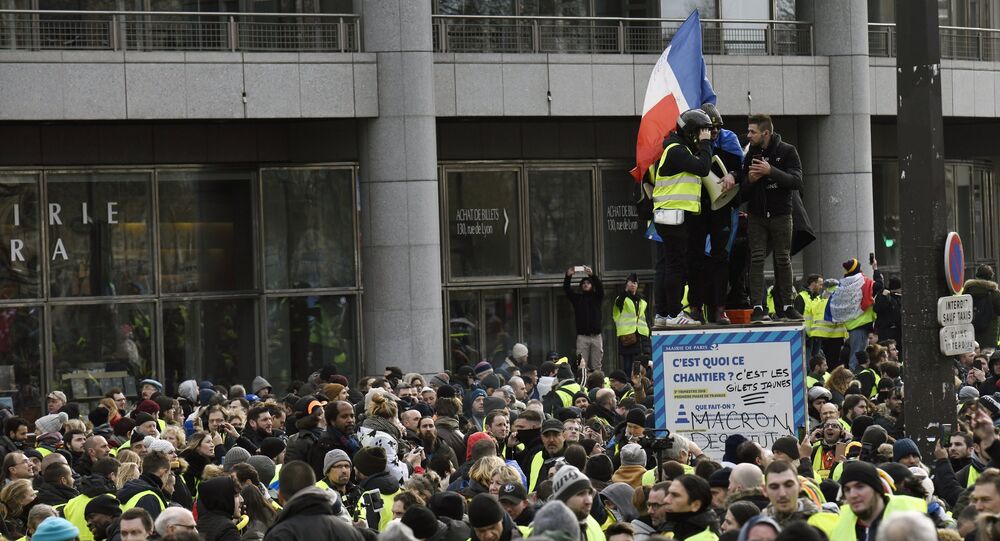 Over 30,000 people joined the Yellow Vests protests across France on Saturday as the demonstrations entered their ninth consecutive week. Speaking to Sputnik, Dr. Emmanuel Dupuy, president of the Institute of European Perspective & Security Studies, suggested that the movement has hit a vital nerve at the core of French society.

Emmanuel Dupuy: At this time, we see a roundup of the manifestation. We are experiencing a new type of organisation, with more coordinating procedure. The manifestation is now split into two, both in the city of Paris, and in the centre of France, in the city of Bourges, to show that the movement is not only focused on a certain number of political grievances, but more on a social and societal dynamic, and this is why, symbolically, part of this region decided to have this manifestation in the centre of France in Bourges.

© Sputnik /
WATCH Yellow Vests Protesters Throw Smoke Grenades at Police Near Arc de Triomphe
What we are experiencing is that there is more organisation, more political coordination, again, and that is a new perspective. Let's hope that the manifestation will not turn into riots. But it seems to [be going] more smoothly than it has in the past weeks.

Sputnik: It seems that the protests has evolved, because of course they began as something that didn't have much structural organisation.

Emmanuel Dupuy: It didn't have much structural organisation but it has a very political strength, in the fact that all of the grievances that seemed to be non-coordinated were deeply in the scope of a certain number of political movements, a certain number of cynical cooperation, and so on. And what we are experiencing is that the Gilets Jaunes are trying to understand how it works, it took a long time.

The Gilets Jaunes have widely understood that they need to be more considered as a political organisation. This is why last week a certain number of key leaders have decided to create a political party and decided to go into the political arena. Now we seem to have a 'better expertise', and they are understanding how the rules are being played, and I think the evolution of the movement is interesting on this fact. Now they are discussing with a certain number of political leaders, a certain number of elected bodies, of course the mayors, which are in the scope of the national debate, which will be launched next week.

Sputnik: Ahead of the protests this week, some of the demonstrators were calling for massive cash withdrawals to disrupt the banks and weaken the state. How far are these demonstrators ready to go?

Emmanuel Dupuy: I think we should not focus on a certain number of declarations, which of course do not represent the totality of the movement. It is not because some leaders have a certain number of unrealistic demands, [among] which of course I would put what you've just mentioned. But all of the leadership of the Gilets Jaunes are pushing or assessing that precise agenda.

© Sputnik /
Over 30,000 Join Yellow Vests Protests Across France - Reports
What is very interesting in this movement is that there is a medical-grade focus on a certain number of voices, but which do not represent the massive demand of a certain part of [the] population. And the fact is that it is not only a local movement, or a movement which has only a certain number of demands, to which the government could have responded, even if it has taken a certain amount of time to respond to that. It is way beyond that. It is a wave of protests of what has not been done in France during the last thirty or forty years.

And they are claiming not only for local and specific demands, but are waiting for a mass movement of reform – reform of institutions, reform inside the political leadership. They are claiming that we have a sort of vacuum on corruption, which of course is a reality in France as well as any other country of the world.

So it is a movement which is now more profound, more political than I think a certain number of media, I would focus on French media, have pinpointed. It is not just a sort of uprising or sort of revolt. It is more of a profound wave of necessity to reform a country which has not tackled a certain number of issues in regard to fiscality, in regard to taxation, or in regard to the problem of the debt, which of course is something which is burdening the growth of France over the last ten years.

Dr. Emmanuel Dupuy is the president of the Institute of European Perspective & Security Studies, a Paris-based think tank. He is also an associate professor specialising in security studies at the Universite Paris-SudOrsay. The views expressed by Dr. Dupuy do not necessarily reflect those of Sputnik.