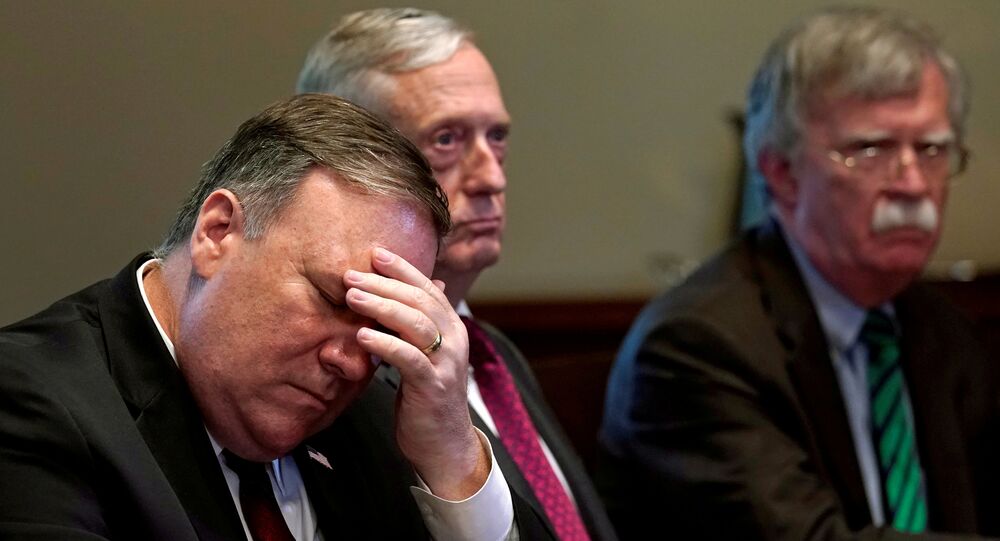 Failed Diplomacy: Ex-Officials on Why Bolton's Visit to Turkey Ended in Nothing

The US conditions outlined by National Security Adviser John Bolton during his Middle East tour have yet again demonstrated Washington's insincerity towards Ankara, former Turkish officials told Sputnik, emphasising the role of the Astana guarantors in the Syrian peace process.

The ultimate outcome of National Security Adviser John Bolton's visit to Turkey was quite predictable, as he did not come to find common ground with the Turkish leadership but to set conditions, Uluc Ozulker, Ankara's former ambassador to France and Libya, told Sputnik Turkey.

According to the diplomat, Washington is trying to promote its anti-Iranian policy and to protect the US-backed Kurdish forces operating in the region.

"The meeting between [John] Bolton and [special adviser to the Turkish President] Ibrahim Kalin did not produce tangible results", Ozulker said. "Judging from the Erdogan representative's statement, during the negotiations, both parties limited themselves to expressing concerns but failed to convince each other of the need for mutual concessions on the Manbij issue, the territories east of the Euphrates River, the fight against terrorism in the region, etc."

© CC BY 2.0 / Kurdishstruggle / Kurdish YPG Fighters
Turkey Repeats Call on US to Withdraw Kurdish YPG From Manbij, Syria
The former envoy emphasised that "it [was] absolutely clear that the solution to the Syrian problem can only be provided by the three Astana guarantor countries", namely Russia, Turkey and Iran. "Other players, at this moment, do not have sufficient strength and capabilities for this", he said.

John Bolton's 8 January visit to Ankara ended fruitlessly and was accompanied by an exchange of reprimands between the Turkish leader and the US national security adviser. Earlier, on 6 January, while in Israel, Bolton stated that the US wouldn't withdraw from Syria unless Turkey ensures the safety of the Syrian Kurdish militia, which is regarded by Ankara as an affiliate of the Kurdistan Workers' Party (PKK), banned in the country.

"Bolton is making a big mistake, his statement is unacceptable. Terrorist organisations do not represent the Kurds," Erdogan emphasised Tuesday, in a reference to the Kurdish People's Protection Units (YPG), the backbone of the US-backed Syrian Democratic Forces (SDF).

However, the Syrian Kurdish militia is not the only one bone of contention for Washington and Ankara: the two countries have yet to reach compromise on the fate of Fethullah Gulen, the supply of Russian-made S-400 missile defence systems and the Halkbank trial.

"As of yet, no specific steps have been taken on any of these issues in order to resolve them", the diplomat underscored.

© AP Photo
Turkey and US Deal is Very Much Dependent on Turkish-Russian Relations – Analyst
For his part, Professor Sukru Sina Gurel, former deputy prime minister of Turkey and head of the international relations department of Atilim University, said that the US delegation had negotiated the issue of providing a buffer zone for Turkey in exchange for Ankara's consent to create infrastructure for a new "quasi-state" emerging east of the Euphrates.

Gurel believes that Bolton's visit to Ankara could not end differently, "given the harshness of the statements made by the American side, which once again demonstrated Washington's insincerity towards Turkey".

According to the former Turkish official, Ankara needs to establish a dialogue with Damascus in addition to its working relations with Russia and Iran.

"Recent events in Idlib and the fact that the al-Nusra Front-led Hayat Tahrir ash-Sham* group is beginning to dramatically increase its influence in Idlib, makes it obligatory for the Turkish leadership to establish cooperation with Damascus", Gurel opined.

© AFP 2020 / Omar haj kadour
Truce Breaches Recorded in 20 Areas of Idlib, Syria - Russian MoD
At the same time, the former official expressed doubts regarding the possibility of a new all-out Turkish operation in Manbij, although Turkey had brought "five times more reinforcements to the Syrian border than during the operations in Jarabulus and Afrin".

"There is still uncertainty surrounding the situation in Manbij, while the situation in Idlib is deteriorating again", he said. "Under these circumstances, the amount of human resources required for the operation in the territories to the east of the Euphrates may become unaffordable for Turkey".

However, according to Turkish Defence Minister Hulusi Akar, Ankara continues to prepare for a military operation east of the Euphrates River in Syria, that, according to the minister, will be launched "at the right time".

"The Turkish armed forces will start to clear the areas east to the Euphrates River of terrorists at the right time for Ankara, as they had done before in others regions of Syria," Akar stated, as quoted by Anadolu news agency.

Earlier, Turkish Foreign Minister Mevlut Cavusoglu dropped the hint that the Turkish Armed Forces would launch a military operation east of the Euphrates River if the US fails to withdraw its troops in time.